Natasha Schmidt
8 min read
Faezeh Hashemi, daughter of former president Akbar Rafsanjani, has spoken up in defence for Baha'is
Sign announcing the closure of a Baha'i business
The Baha'i "blacklist" : A list of Baha'i businesses to boycott 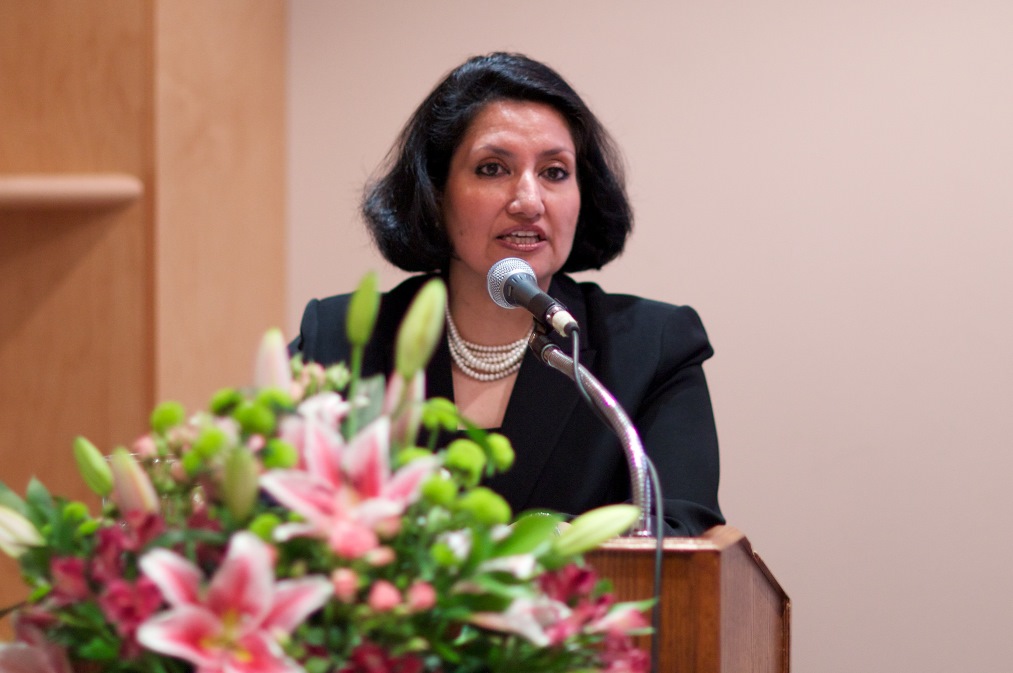 Iranian authorities have targeted Baha'is, Iran’s largest religious minority, for decades, but it was only after the Islamic Revolution of 1979 that the  government enshrined this discrimination into policy. Since then, authorities have arbitrarily arrested Baha'is, desecrated their cemeteries and stripped them of their basic rights, including the right to economic freedom.

Now the Baha’i International Community has written to President Rouhani, urging him to put an end to this sustained campaign of economic apartheid.

The letter describes what it was like after the revolution, when thousands of Baha’is working for government ministries and departments or for state-run companies and factories faced expulsion without any compensation, and how Baha’i establishments were seized. And it describes how today, the persecution continues.

“How can the deliberate policy of a government be to impoverish a section of its own society?” the letter asks Rouhani, and argues that Iran’s leaders strike such a blow not only to its largest religious minority, but also to the prosperity of the whole country.

IranWire spoke to Bani Dugal, Principal Representative of the Baha'i International Community to the United Nations, about the letter.

Why did the Baha'i International Community write this letter now?

Economic and social rights of the Baha’is have been severely curtailed since 1979’s Iranian revolution. But in recent years we have noticed a shift. They’re really trying to curtail the capacity of the Baha’is to exist as a viable community by going after their very foundation, their very existence, cutting off their potential to earn a living, to send their young people from going to university. Their licenses are being taken away, their shops are being closed; their homes have been confiscated because they set bail amounts so high that they end up losing their homes as collateral.

The Baha'i Blacklist: a list of Baha'i businesses to boycott

The supreme leader holds the real power in Iran, since he controls the courts and the security forces. So why have you decided to write to Rouhani instead of Ayatollah Khamenei?

In three previous letters, the Baha’i International Community wrote to relevant individuals in authority, such as the prosecutor-general, the Minister of Science, Research and Technology, and the head of the judiciary. The prosecutor-general issues orders against the Baha’is. The Minister of Science blocks Baha'is from getting their licences for businesses, and also issues the orders for Baha’is to be expelled from universities. And the head of the judiciary is charged with meting out justice within the country.

Rouhani is the elected leader of government and the head of the executive. He has called for an economic rapprochement with the international community in order for Iran to move forward and provide economic opportunities. We’re saying: If this is what you want for your people, then start by removing this economic apartheid.

The tone of this letter seems to be harsher than previous statements by the Baha'i International Community. Has the community adopted a new approach?

The tone of the letter is respectful, while highlighting the contradictions between the rhetoric and the reality in Iran. The breathtaking nature of the contradictions being pointed out may make it seem frank and firm. We don’t believe it’s being harsh. What is harsh is the unrelenting impoverishment of a section of Iranian society. What is harsh is the suffering of innocent people. There’s no change in the Baha’i International Community’s approach.

Bani Dugal: principal representative of the Baha'i international community to the UN

The Iranian government says the Baha'i faith is really a disguise for British, American and Israeli agents, and that the Baha'is who are in jail aren't incarcerated for being Baha'is, but for committing crimes against Iran’s national security. What is your response to this?

Baha’is work toward unity within the country wherever they are, to support their governments in their moral authority to do the right thing, to do what governments are supposed to do — and that is protect the people and make sure they have healthy vibrant communities. So there is absolutely no way that Baha’is could threaten national security because it just goes against the very purpose for which the Baha’is are striving: to build unity and strong communities, be they at local or national level.

As far as the charge of Baha'is being spies, this is a longstanding accusation. One reason is that our world center happens to be in Israel. And of course Iran has a special feeling of animosity toward Israel. Because our center is in Israel, they try to make that link. It’s bound to create suspicion in the minds of ordinary Iranians, and fits in with the campaign that they’re waging against Baha'is in Iran and the world over.

Our center is in Israel because of two successive Islamic regimes. One was the Qajar dynasty in Iran in the 1800s, which exiled Baha’u’llah, the founder of the Baha’i faith. He ended up in Turkey under the Ottoman Empire, which actually took him prisoner. At that time, he was taken to Akka, in what was then Palestine and under the power of the Ottoman Empire. He was imprisoned there by the Ottomans. At that point he said the Baha’i world center would be established in Haifa, where it is now. The state of Israel was actually formed 60 or 70 years later. The Baha’i faith was already there, our world center was already there, well before the state of Israel was.

As for spying for the West, Abdu’l-Baha, the son of  Baha’u’llah, was knighted by the British for the philanthropic work he was doing in Palestine, and helping the poor. Iranian authorities like to say there’s a British connection. They have this hatred for the US so it’s convenient to link the Baha’is and say they spy for them. But there’s absolutely no basis for this claim. There is a large community in the United States, but the largest Baha’i community is in India. Are we spying for India as well? Of course not. There are Baha’i communities all over the world — including in Iran.

The letter uses the term "apartheid", which of course makes one think immediately of South Africa. Can you really compare the situation in Iran and South Africa?

The meaning of apartheid is separation. In South Africa there was a deliberate attempt to separate on the basis of race, to create a division between citizens, and an “othering” of a whole population. In Iran, there’s a separation and “othering” based on religion. The word accurately and appropriately describes what’s going on. When there is a policy that excludes Baha’is because of their belief and call them “religiously unclean,” it is apartheid. It’s a separation, and it’s also creating this feeling of hatred toward the Bahai’s.

When Rouhani became president, he promised greater freedoms and prosperity. Is the situation better now, three years on?

We hope that all the promises he made were not disingenuous, and that he genuinely wanted to bring about this change. But the only thing we have to go on is proof — and the situation for the Baha'is is actually much worse.

In fact, at a time when Iran’s economy has been hit by sanctions and other restrictions, they’re taking away jobs rather than allowing Baha'is the opportunity to serve their country and help bring prosperity to other citizens in terms of providing jobs. The strategy is becoming more insidious. We don’t have the great numbers of arrests or the executions that we saw in the 1980s and early 1990s, although the revolving-door arrests continue. But the Baha'is are really facing brutal persecution, being squeezed financially.

What do authorities say when challenged on this?

They claim that Baha’is are unclean and therefore unfit for professions. The term “religiously unclean” was coined by the clergy because the Baha'is were seen as heretic. It predates the revolution, and it’s now been institutionalized. Baha'is cannot work in certain areas — in government-owned businesses and other areas [including in the public sector].  And professions for which they’d be seen as unfit because they’re unclean are the food sector or in healthcare, for example.

Faezeh Hashemi: daughter of former president Akbar Rafsanjani, has spoken up in defence of the Baha'i

Are the attitudes of non-Baha’i Iranians changing in Iran?

We’ve seen prominent Iranian citizens speaking out on behalf of the Baha’is. Former president [Akbar Hashemi] Rafsanjani’s daughter has come out and made public statements and spoken out. There is a rise in Iranian civil society speaking out, ordinary people speaking out for Baha'is publicly or privately — they may be afraid to speak out publicly because of the consequences.

However, on the flipside, the attempts on behalf of the government to demonize the Baha'is and spread lies about them is very much on the rise. There is something like tens of thousands of articles and other mentions in state-owned media that are deliberate attempts to defame and discredit the Baha’i community. Some segments of the population have been influenced by all the lies.

Recently, there have been a number of Baha’i sportsmen and women from Iran who have not been allowed to participate at international and national events. It’s incredible the extent the government is willing to go to, losing some of these stars — young people doing amazing things for the country. They’re willing to forego that just because of their prejudices.

Clearly, when you sideline a large minority like this, it’s bound to have an impact.

Tehran Daily: Eight Desperate Iranian Workers Have Set Themselves on Fire Since May

Out of Sight, Out of Mind: Young Workers' Families Left Destitute by Metropol Collapse

Trouble Ahead? Subsidies in Iran Could be About to End

Ten Weeks Into Russia-Ukraine War, Iran's Supermarkets are Running Out of Cooking Oil

7 min read
Continue to next article