Ahmad Montazeri: Someone With More Authority Than the Judge Sentenced Me 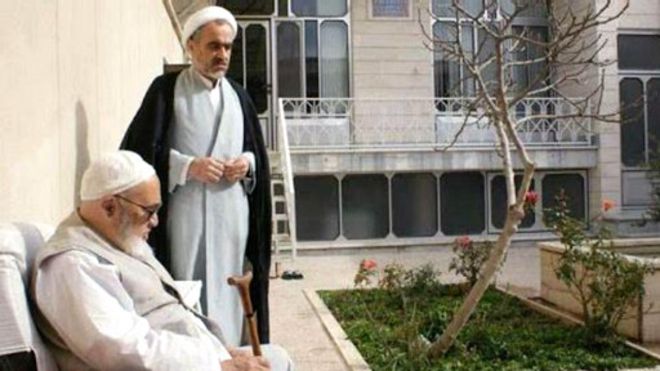 On Sunday, November 27, Iran’s Special Clergy Court sentenced Ahmad Montazeri, son of the late Ayatollah Hossein Ali Montazeri, to 21 years in prison for activities against national security, propaganda against the regime and the publication of secrets. It has also defrocked him.

The court’s actions come in response to Montazeri’s decision, earlier this year, to release a 1988 audio file in which his father, who was once heir apparent to Supreme Leader Ayatollah Ruhollah Khomeini, can be heard arguing with three officials Khomeini had appointed to carry out mass executions of political prisoners.

The men on the so-called “death panel” were Hossein Ali Nayri, a religious law expert, Morteza Ashrafi, then Tehran’s prosecuting attorney, Ebrahim Raisi, a deputy prosecutor, and Mostafa Pourmohammadi, then a representative of the Ministry of Information. At one point, Montazeri calls the killings “the biggest crime in the Islamic Republic – a crime that will condemn us all in history.” In the end, thousands of political prisoners were executed that summer.

The 1988 executions are perhaps the biggest taboo in Iranian politics. The publication of the audio file on August 10 led to an uproar. Ahmad Montazeri has been interrogated several times since then.

According to Ayatollah Montazeri’s official website, he will have to serve six years of his 21-year sentence because he does not have a criminal record and because his brother, Mohammad Montazeri, was a “martyr” who died in a 1981 bomb attack carried out by the People's Mojahedin Organization.

IranWire spoke to Ahmad Montazeri about the court’s decision.

What do you think about the court’s verdict?

This is a truly unjust verdict. Ayatollah Montazeri spoke at a meeting and I published a recording of the meeting after 28 years. For this, I have been charged with activities against national security, propaganda against the regime, and disclosing secret material. In the defense bill that I submitted to the court — and on the day of the trial the judge said that it was a very good bill — I explained that whatever agency produces a document must decide whether that document is secret or not. Neither Ayatollah Montazeri’s office nor he himself had stamped the tape as secret or confidential. Secondly, all the contents of the tape had been already published in his memoirs.

Did you expect such a verdict?

My trial was conducted by a respectable judge who was convinced by my arguments. I thought that he would acquit me, but the verdict turned out to be something else. It looks like the judge had no authority and the verdict was dictated from someplace else. What went on in my four-hour trial, and what I witnessed of the judge’s personality in no way agrees with this verdict.

Every time you were interrogated, you reported about it through your Telegram channel. What went on in those interrogations?

I was interrogated eight times. Each session lasted three or four hours. The subject was mostly other tapes. They also asked in a friendly manner whether, now that the tape had been published, we could “wrap it up” as they put it. In the last session, when they were deliberating over this question, I said that the regime had no choice but transparency. This is the same recommendation that [Deputy Speaker of Parliament] Dr. Ali Motahari has made, i.e., [that Iran should] create a fact-finding panel to decide what happened. This is the best suggestion because from the viewpoint of the law and Sharia, this is the way that must be followed if the rights of the people have been violated, or if there have been excesses in the killings.

The public treasury must pay retribution for these people and they must be justly recompensed. If the case is handled this way and the issue is treated correctly, then it would actually elevate the regime. Otherwise, anybody with power can cover up and suppress the truth. If we really want to solve the problem, then we must act as Dr. Motahari suggests. Independent people like him must come, tell people the truth, and repair the damage.

You mentioned that, during your interrogations, there was talk about other audio files. You have also said before that you possess other documents. Are these documents about the events of 1988, or are they on other subjects?

Ayatollah Montazeri was deputy supreme leader, so his meetings were recorded. These files contain his conversions and religious debates with different groups and officials. [The interrogators] were adamant that I should give them all the documents so that they can decide which ones were confidential because, they said, these belong to the regime and must not remain at my disposal.

What I promised to do — what I have done and will continue to do — is to review the documents. If I find any documents that belong to the regime, I will surrender them. But they do not. They are keepsakes of Ayatollah Montazeri talking, guiding, and debating. They are items of honor for me. I consider it a betrayal to surrender these documents to the Special Clergy Court. They are family heirlooms and I am not the sole person who must decide what to do with them. But what I said, and what I am bound by, is that I would certainly not disclose them if they contain secrets that belong to the regime.

I believe that this audio file was not a regime secret because, 15 years ago, Ayatollah Montazeri talked about it in detail. Most of it is already in his published memoirs. But [the interrogators] say that, in their view, this file was not only secret, but top secret, and that I was not qualified to decide whether it was secret or not. They said that I must give them all the files and that it was up to them to decide whether they are secret or not.

Another topic that attracted attention yesterday was that your sentence was partially pardoned because your brother was a martyr. What is your opinion on this?

This is against the law as well. Nowhere in the law does it say that a martyr’s brother gets a reduced sentence, meaning that when a person has committed a serious crime, then two-thirds of his sentence will be mitigated because his brother has been martyred. There is no such law. They want me to owe them a debt of gratitude because they say that they did me a favor.

Do you know when the appeals court will pick up the case?

I have 20 days to file my appeal, but it is up to them to decide when the court will be held.

Politician Under Fire for Criticizing Judiciary