The following article was written by an Iranian citizen journalist on the ground inside the country, who writes under a pseudonym to protect her identity.

Kimia Alizadeh was born on July 10, 1998 in Karaj near Tehran. Her parents were originally  from Iran’s northeastern Azeri province and moved to Karaj 20 years before in search of a better life. Once in Karaj, her father, Keyvan Alizadeh, set up a workshop for producing embroidered tablecloths, a business that enjoyed such success that today he outsources some of the work to smaller businesses.

Keyvan Alizadeh was not an athlete and had no particular wish or plans to make his daughter into one. But when Kimia was only seven years old her mother took her to the local sports club — which happened to be a taekwondo club for women. Her mother later explained that they had only signed Kimia up to the club to give her something to do outside of school.“We wanted her to move around a bit,” she said. “But her coach decided that her body style was suitable for taekwondo and encouraged us to let her continue.”

The “style” the coach referred to was Alizadeh’s height, which was unusual for a girl of her age. At puberty, she grew to be taller than her father. At 14, when she hoped to participate in provincial competitions in the 57kg weight class, she had grown to be 180 centimeters. She is now 186cm (6.10 feet) tall and competes in the 69kg weight class.

But taekwondo was not something Alizadeh dreamed about as a young girl, although even at seven years old, it was clear that she had what it took to excel at the sport. “I want to become an astronaut,” she wrote in a school assignment when she was in middle school. This was not just idle wishful thinking. Since childhood, she had been in love with mathematics and physics. But becoming an astronaut was not on the cards.

In 2014, the Iranian Taekwondo Federation decided to send Alizadeh to the Asian Games at Incheon, South Korea. But on the very day that she was due to compete, the Games’ organizing committee revoked her permit because she was not yet 17. “Next time, please read the Asian Games’ bylaws carefully,” was the answer the Iranian federation got when it objected to the decision. The response was unsatisfactory because, before the competition, this same committee had issued a permit for Alizadeh. All the required information had been supplied to the committee beforehand. Regardless, this is how Kimia Alizadeh’s athletic career began. Luckily, things took a turn for the better. 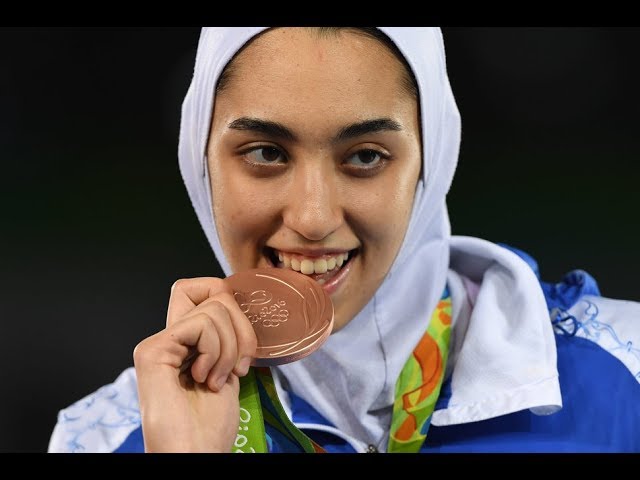 Four Wins in One Year

Nine years after her mother first took her to the sports club as a leisure pursuit, Kimia Alizadeh won her first honor for Iran at an international competition. In 2014, she became the first Iranian female taekwondo champion at the World Taekwondo Federation’s Junior Championships. She won a gold medal at the 2014 Summer Youth Olympic Games in Nanjing, China and another gold at the 2014 Guangzhou open games. And, again in 2014, she became world champion at the Antalya Open in Turkey. So, in the span of just one year, she became world champion in three weights — 52, 59, and 63 kilograms.

To nurture such a talent, the Iranian Taekwondo Federation had to invest. Since Alizadeh had to stop going to school to concentrate on her athletic career, she required private tuition, which the federation paid for. Her private teachers remarked that she was so intelligent that they never had to go over a topic more than once. The 2015 World Taekwondo Federation described her as “The Intelligent Iranian Girl.” Others called her a genius. And she was only 16.

In 2015, at the World Taekwondo Grand Prix in Moscow, Kimia Alizadeh became the first Iranian female taekwondo athlete to win a gold medal at the adult games. The same year, she received some good news: Her old coach Mehroo Kamrani, with whom she had a close relationship — she regarded her as an older sister — had returned to the sport. At this point, Alizadeh’s standing was so high that she was able to ask the Iranian Taekwondo Federation to appoint Kamrani as the head coach of the National Women’s Taekwondo Team.

Then, at 18, came the biggest challenge of her young life: The 2016 Rio Olympic Games. That year, Kimia Alizadeh and Zahra Nemati, the Paralympic and Olympic archer, were considered to be the best chances for Iran’s female athletes to win medals.

Above and Beyond the Call of Duty

Kimia Alizadeh won her first match against Croatian athlete Ana Zaninović and advanced to the quarter finals. But then she lost 7-8 to the Spanish competitor Eva Calvo Gómez. Only after the Olympics was it revealed that Alizadeh had gone to Rio with a seriously injured cruciform ligament. But after this defeat and still suffering from the injury, she defeated Egyptian Hedaya Malak and Thai Phannapa Harnsujin in the makeup round. Then she won 5-1 against Nikita Glasnović from Sweden and was awarded the Olympic bronze medal.

This was the first time that an Iranian female athlete had won a medal at the Olympics — and this history had been made by a young woman of 18. She was also the youngest Iranian athlete, male or female, to win an Olympic medal. Before Alizadeh’s win, the record belonged to Iranian wrestler Nasser Givehchi, who had won a silver medal at the 1952 Olympics in Helsinki when he was 19.

After this victory, Alizadeh received a congratulatory message of sorts from the Supreme Leader Ayatollah Khamenei. “From the bottom of my heart I thank all women athletes who appeared on the world stage with hijab,” he said, not mentioning her name.

But President Hassan Rouhani’s comments were a little more ecstatic: “My Daughter Kimia! You made all Iranian people, especially the women of this land, happy. I wish you eternal happiness.”

The official Olympic Games website also remarked on Alizadeh’s achievements: “While the headlines may have gone to Great Britain’s Jade Jones for her second successive gold,” on article read, “Alizadeh’s feat was equally as impressive given the cultural obstacles the 18-year-old has had to overcome. Conservative religious traditions in Iranian society mean that many women don’t pursue careers in sport, but with taekwondo enabling Muslim women to cover up while participating – in keeping with the customs of the faith – Alizadeh was free to take up the martial art. It became evident early on that she would go far.”

The United Nations mission in Iran also commended Alizadeh for her great success, saying such a victory would pave the way for other Iranian female athletes to pursue their dreams in sports.

After the Olympics, Alizadeh underwent surgery for her injured ligament and had to take a break from tatami taekwondo for months. But even with this time off, when it came to the 2017 WTF World Taekwondo Championships in Muju, South Korea this June, she won a silver medal.

During a ceremony to honor Iranian medal-winners at the Olympics, Kimia Alizadeh took the opportunity to voice her political views. She stood on the podium and thanked Hassan Rouhani’s administration for reaching the nuclear agreement and for economic developments in Iran. And in the run-up to the 2017 presidential election, she joined the “With Rouhani until 2021” campaign.

Alizadeh is only 19, so she has a good chance of winning gold medals for Iran for at least the next two Olympic Games. And she has proven herself to be a priceless asset for Iranian women’s sports, a shining example of the true potential of women athletes in Iran.

The Hateful Schoolteacher and His Master