Although senior Iranian officials repeatedly deny it, Iranian security forces and police have a long history of using violence and brutality against protesters.

For the first time, IranWire is publishing a video of police attacking Gonabadi dervishes on February 19, 2018. The film, which contains disturbing footage, clearly shows several Gonabadi dervishes sustaining injuries in the eye after being shot by pellets.

[Warning: This video contains scenes of violence. The soundtrack has been removed for security reasons] 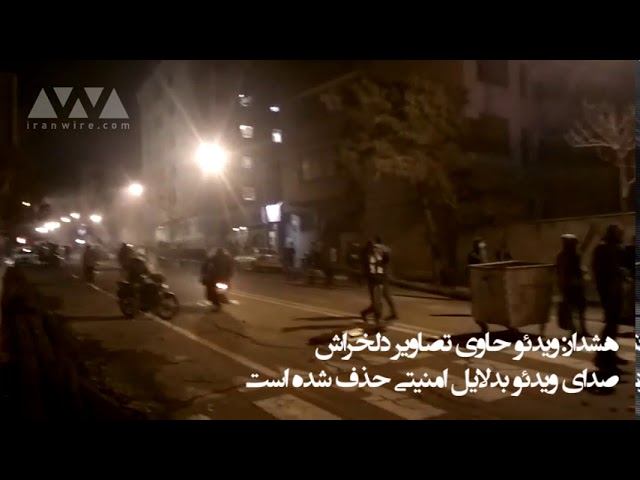 Instead of acknowledging these and other crimes against protesters, Supreme Leader Ayatollah Khamenei recently used an address to military officials to lash out at French authorities for their handling of the “yellow vest” movement in Paris, accusing them of violating the human rights of the French people.

Speaking at a meeting of Air Force commanders and personnel on February 8, the Leader said French police were “blinding their own people on the streets of Paris” and suggested that no one was holding them to account. “The people demonstrating on the streets of Paris are attacked by the armed forces of the French government, many of whom lose their eyesight! They treat their people like this, but they ask us to respect human rights. Well, what is it to you? What is your claim on human rights which entitles you to question another nation about it? Do you have any idea about human rights? They have no idea about human rights!”

Khamenei was of course referring to the Yellow Vest Movement across France — called so because of the fluorescent safety vests many protesters wear and which French motorists are required to carry by law in case of emergency. For months now, French protesters have been demonstrating against fuel tax increases, and many of the protests have been marked by violence brought on by both demonstrators and the police, who have fired pellet shots into the crowds.

The most famous example of Iranian agents’ violence against its citizens in modern times is perhaps the unrest that followed the disputed 2009 presidential election, which became known as the Green Movement. But much more recently, throughout 2018 and into 2019, Iran’s security forces have used violence against protesting workers, teachers, Gonabadi Sufis, students and farmers. Not only have these attacks resulted in people being blinded after pellets were fired at them— as Khamenei accuses the French police of doing — but in a few cases they have also killed people after using excessive force.

The police killed a number of protesters during nationwide protests in December 2017 and January 2018. And according to unofficial sources [Persian link], in early 2019, 21 farmers in the province of Isfahan were blinded after the riot police attacked and fired pellet shots at them during protests. A video has been posted online that shows a number of these farmers in the hospital with clear signs of pellet shots on their bodies and their eyes.

After the clash between Gonabadi Sufis and police in Tehran’s Golestan-e Haftom street, a Gonabadi Sufi by the name of Mohammad Raji, who had been a commander of Iranian forces in the 1980-88 Iran-Iraq war, died as a result of violence under interrogation after being taken into custody.

It has been a year since the dervishes were arrested and beaten by plainclothes agents and the police, but in many cases, the signs of the beatings and injuries that they suffered are still visible on their bodies. Majzooban Noor, Gonabadi Sufi’s news website, has reported the names of a number of dervishes who were maimed or seriously injured by the police:

Three of the above — Nima Azizi, Mohsen Norouzi and Ahmad Barakoohi — have lost their eyesight completely.

Hasan Shahreza, Alireza Lak and Amir Nouri have hearing problems as a result of being beaten during their arrests and interrogations.

Many of the imprisoned dervishes are being held in the Greater Tehran Central Penitentiary, known as Fashafuyeh Prison. The prison is known to lack proper hygiene facilities and it is reported that many of the inmates are suffering from inflammation in their oral cavities and from infected gums. Prison authorities, however, refuse to arrange for them to receive medical treatment outside the facility.

And yet, instead of using his power to improve the human rights of prisoners being held for exercising their right to protest, the Supreme Leader has chosen to look outside his country to a situation in faraway France.

A Young Iranian’s Memory of Torture, Humiliation and Urine, January 29, 2019

Where is Edris Faghighi? Family of Missing Kurdish Man Kept in Limbo for 11 Months