“We spent some time in Alexandria Park and on the streets of Athens. Junkies with needles were all over us. I was six and a half months’ pregnant when I got a positive test result for Hepatitis C. I told the camp manager, and he replied: ‘go back to your country or go and sleep in the streets again if you’re not happy.’ I’m sick of this life. I ask God every day to find an organization for me to support me and my child. My child will come into this world in a month and I have nothing to provide for her.”

I met Mahsa one night outside Eleonas camp. I was talking to an Iranian man named Reza who was holding a blanket and standing next to a campfire he’d lit outside the entrance to the camp. He was demanding to be let in and said his wife had committed suicide because of the pressures of asylum-seeking life in Athens and after having been institutionalized in a mental hospital.

Reza and I were talking when Shahin, Mahsa’s husband, joined us and invited me to visit their shipping container where they were staying in the camp. He asked me to listen to his wife’s story of seeking asylum, the story of a woman eight months’ pregnant.

Shahin told me he was a musician back in Iran and married Mahsa a week after they first met. For the first seven years, they lived their life between Iran and Turkey, but when Mahsa was three and a half months’ pregnant, they decided to leave Turkey to experience “security” and “freedom” in a new country, and planned to get there by climbing the border fences between the two countries. “When the EU opens its doors to refugees, it is responsible for supporting us,” he told me.

Shahin and Mahsa, like thousands of Iranian asylum seekers, thought that Germany’s 2015 invitation for Syrian war-torn refugees to come to and live in their country included them as well.

However, what they experienced was quite different from what they had expected — in fact, it was nothing but homelessness, hunger, hopelessness, and pain. As he took me back to where he and Mahsa were staying, Shahin spoke of his frustration that officials in Athens lacked accountability to care for refugees in the city.

We got to their conex, a shipping container measuring two by three meters. A bed took up most of the space, and there was a mini-kitchen next to one wall. I sat next to Mahsa on the bed and she began telling me her story, describing the pain she had experienced throughout. 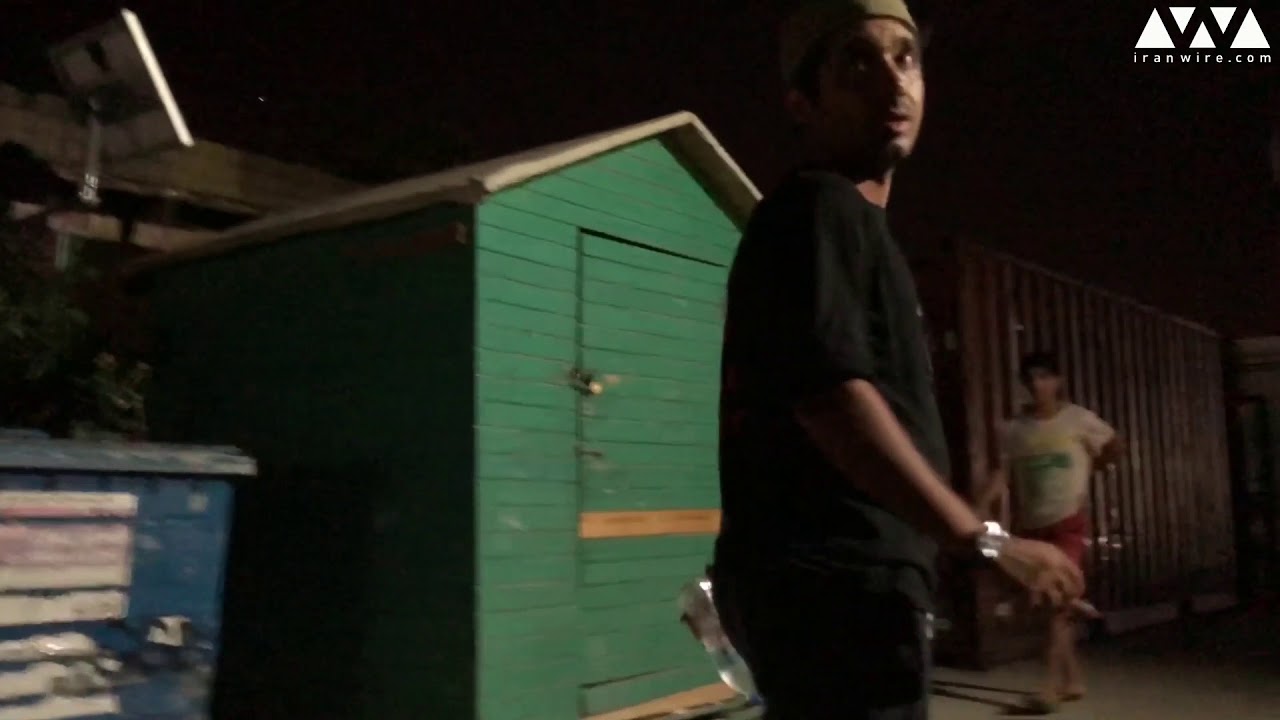 Eleanos Camp, the only refugee camp in the city of Athens

She began crying as soon as she started telling me her story.“You listen to my words as you would complaints from a friend, but no one else even noticed me. We got our money cards [Greek government-issued cards for purchasing food and basic goods, paid for out of a UN budget] after four months. But every month we fear what will happen if they don’t wire the money. We have to go and sign before getting paid. Yesterday we went, and they had only wired 70 euros, which was all gone after we paid our debts. We had to borrow money from everyone during the last few weeks to have something to eat. I should be getting ready to give birth, but we have nothing." With tears running down her face, she told me where they were staying was ridden with mosquitos and she was completely covered in bites, and showed me some of them. “I told the camp manager this place is full of bedbugs. He laughed and replied: ‘do you want to lose this place?’” She said she didn’t even have access to bug repellent. Luckily, I had some with me, which I gave to her.

The moment Mahsa and Shahin set foot in Greece they were arrested. They spent two months in prison and two months in quarantine before they were freed to figure out their destiny on the streets of Athens. It was during that time that Mahsa was diagnosed with Hepatitis C. She was told that she must live in a sanitary environment in order to improve her health, but that was impossible while living in the camp. Although the couple had the necessary documents to receive medical attention, they were not entitled to any support outside the camp. “All of these human rights organizations are responsible,” Shahin said in a sad voice. “One day I finally saw these Greek officers in court [and said]: Is it fair for my pregnant wife to sleep on the streets?”

According to Greek law, refugees should not be left homeless. However, a short walk throughout the streets of Athens reveals dozens of homeless refugees on every street corner. After being on the streets for a while, Mahsa and Shahin took refuge with a group of anarchists in a neighborhood called Exarchia, a place full of “skewat” motels — places anarchists let refugees stay as long as they agree to take part in their marches. But Mahsa and Shahin didn’t spend a long time there because Shahin said some of the Arabs and Afghans also staying there were not welcoming to them. “They had brought their racism with them to Greece,” he said.

Shahin went to many Greek organizations in search of help, but each time he was left feeling he was further away from help. “I could not do anything for my wife. It does not even matter anymore whether I’m in her life or not. My only role is to hug her when she sleeps —and even that can be replaced with a stuffed animal. If this situation continues, I’ll go to the UN and set myself on fire.”

Shahin described what it was like to be rejected everywhere they went. “My country did not want me. After living in Turkey for four months, police raided our apartment to arrest us, and we had no option but to escape to Greece. We passed through Aderna in Turkey and got to Thessaloniki in Greece and then Athens. My family also lives in Athens, but they also abandoned me because of my beliefs. And now this is our life in Athens.”

Shahin’s face was white like the wall behind him, and there was a darkness all around his eyes. Mahsa looked at him and said: “This is what his father had left us with. Instead of supporting us, they threw us out of their motel room. Because of my illness, I have to use warm water in the bathroom, but whenever I did, his father turned mad, turned off the water heater and left the room. I’m carrying their grandkid and they can’t support us.”

Shahin’s father, mother, and sister came to Athens two years ago. Shahin stayed in Iran and continued his music, but after he married and came to Greece, his family abandoned him. “I can’t sleep at nights. When Mahsa sleeps, I stare at the ceiling and think about my daughter Sina, who is coming into this world. When my father found out that our baby is a girl, he said that even the universe is against me or else I’d be having a son. All of our misery is because we listened to Europe’s invitation to refugees. If I invited 500 people to my wedding, I wouldn’t leave them there hungry.”

Mahsa could not stop crying.“I have to use the bathroom in the middle of the night because of my illness. I constantly hope that my child won’t come to this world any sooner than the due date. If she comes now, I have nothing to give her. I even wonder if I have enough milk to breastfeed her. What will I do if we need to buy her food? I feel like I’m going crazy. My memory is fuzzy, I have health issues and I will transfer all this pain and disease to my baby. She’s yet to be born, but she is already infected with Hepatitis C.”

Initially, the camp manager had suggested that Mahsa and Shahin live in a shipping container with another pregnant woman who had Hepatitis C. This was something Mahsa could not bear. “That woman and I had to stare at each other every night and share this unspeakable pain while being pregnant because no one is accountable around here.”

Shahin said he had to take drastic action to get out of the situation.

“The reason that they gave us this conex was because I threatened to set myself on fire if they didn’t provide my pregnant wife with a decent place,” Shahin said.

“Finally, they give us this room with a recommendation from the medic. We are supposed to give birth to our daughter in this room. Where we can even put her bed? Two of us can’t stay in this room for more than a few hours, you can’t breathe after that. These Greek officers only listen when you force them to.”

The couple’s pain and unhappiness was unending, and Mahsa’s tears kept falling. Their eyes were full of disappointment and desperation. I hugged them and promised to visit again. We exchanged WhatsApp details and I told Mahsa: “You’re a strong woman who came this far, you can make it and you will.” She seemed to feel a little better. It was past midnight. I asked her if there was anything she needed. She hugged me and said, “I haven’t had chicken or beef for a while now, I really crave them.”

Then Shahin said: “I asked you to come because Mahsa is very lonely and has no friends here.”

I got in my car and turned on the ignition, then found the only grocery store open late. I got the meat for Mahsa and went back to the camp. Shahin and Mahsa came to the car and I handed them the grocery bags. We hugged and Shahin said: “You promised me. Promise to tell the story of Mahsa and me to the world. Go and tell them what happens to refugees in the hell-hole of Athens.”

Zarif and Pompeo Exchange Insults and Accusations as Floods Continue