8 min read
Sadaf Khademi was not allowed to use boxing facilities in Iran so she practiced in a park with a punching bag that her coach hung from a tree
Sadaf Khadem decided not to go to college to pursue boxing
Khadem fought against French boxer Anne Chauvin
Iran’s boxing federation did not even allow her to advertise herself as an Iranian. But Sadaf Khadem made her own uniform featuring the colors of the Iranian flag

The photograph shows a young woman with a graceful body and well-toned muscles standing next to a referee, crying. A little earlier, her opponent had taken her hand and raised it above them both. But now it was the referee’s turn to declare her the official winner of the fight, which took place on Sunday, April 14 in western France — and she was unable to hold back her emotions, her face lined with tears.

This is Sadaf Khadem, born in 1995, and she is the first Iranian woman ever to take part in an official boxing match.

The first sport she decided to pursue professionally was basketball, but she was told, at a weight of 107kg, that she was too heavy. At the suggestion of her coaches, she changed sports in order to lose weight. She chose boxing which, in those days, was an illegal and underground sport for women in the Islamic Republic of Iran.

“I felt lighter by the week,” she said. “It was as though my body had been set free. And when I got in shape, I did not return to basketball. I felt that I could not let go of boxing.”

It was difficult though. “Everybody was trying to discourage me,” she said. “Even boxing managers told me that this was not my sport and I would not get anywhere as a boxer. But I stood by it and fought.” 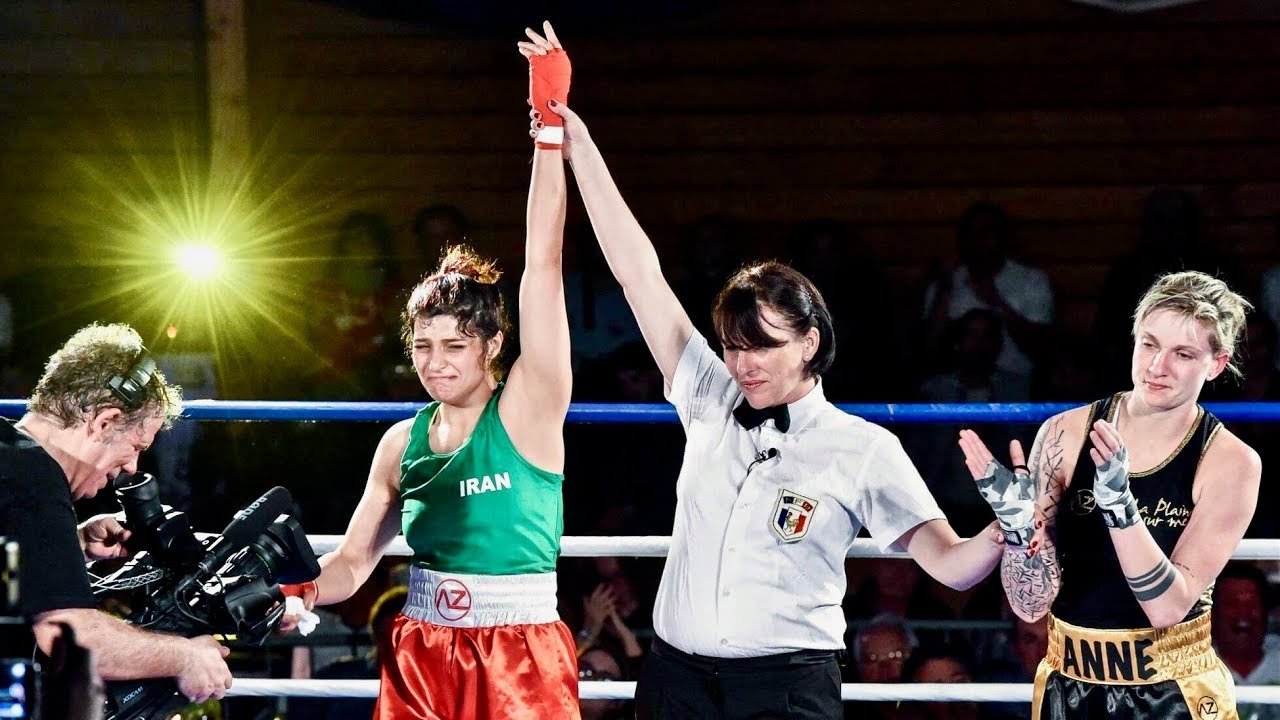 Boxing in the Park

In 2016, when Sadaf Khadem had just started boxing, she would go to the Taleghani Park in Tehran where her male trainer would hang a punching bag on a tree so that she could practice. They had to do this because women are not allowed to practice in boxing facilities.“One day they told us that we were no longer allowed to practice in the park because I was a woman and boxing was not for women,” she said in an interview with the Islamic Republic News Agency (IRNA). “We arranged it so that I would go to where he [her coach] coached boxing in the village of Kheir Abad in Gharchak...I went there three or four times a week to practice.”

In 2017 she was accepted to the university to study sports engineering — but then the professors objected. They told her she had to choose between sports, work and college. So she chose to work and to pursue sports. “That year I worked at a sports club in Yousef Abad [a neighborhood in Tehran],” she said. “There was a lady photographer who took pictures of women. She learned that I boxed and took pictures of me during a session. I posted a couple of them on my Instagram page and the media took notice. A sports magazine interviewed me and it led to a lot of controversy. Male boxers said that I did not know how to box and ridiculed me. I was so irritated that during the night my heart rate would get very high.”

But Khadem stood her ground. Little by little she became Iran’s only professional female boxer. She ran her own private club and taught other young women to box. Her weight stayed down, at 70kg. And she used Instagram to introduce herself and her activities to the world. And it was Instagram that brought her to the world’s attention.

At one point Sadaf Khadem learned that Mahyar Monshipour, the Iranian-born French boxer and a legend on the international boxing scene, was coming to Tehran. When in Tehran, he got together with a group of male and female martial artists in the ski resort of Tochal near Tehran and offered them free training on the rules and techniques of both professional and amateur boxing. “To me, Mahyar was a legend and I loved meeting him,” Khadem said. “I and another couple of girls went there to practice boxing.”

A little later she received a message that Mahyar Monshipour had joined Telegram, so she messaged him a video of her practicing. He immediately got in touch with her.

Monshipour, born in the city of Bam in southeast Iran in 1975, was sent to Poitiers in France when he was 11. He became known to Iranians in 2003 when he came to Iran to help after a devastating earthquake killed over 26,000 people, injured about 30,000 and laid waste to the area he was from. He is known to the boxing world because he was super bantamweight champion of the world from 2003 to 2006. Of the 37 matches that he fought during his professional career, he won 31 — almost a world record.

Now the world champion wanted to make Sadaf Khadem an international figure in boxing too, entering into negotiations with the French boxing federation to invite her to a friendly tournament in France.

But what about support for Khadem within Iran? On February 12, Hossein Suri, head of Iran’s Boxing Federation, reported that women could participate in boxing competitions if they wore the Islamic hijab while competing. He told Tasnim News Agency that after numerous efforts by Islamic countries, primarily from Iran, the International Boxing Association (IBA) had agreed to allow female boxers wearing Islamic hijab to take part in tournaments promoted by the organization.

But on November 20, 2018, the Iranian Students’ News Agency (ISNA) broke the news that Iranian female boxers would be able to register to box on Iran’s Boxing Federation website. In other words, before November 20 Iranian women were banned from competing in boxing matches in Iran. But, according to the head of the boxing federation, the agreement with IBA had been reached through negotiations in Moscow and Jakarta before November. It was hard to believe that the national federation would negotiate with the international federation about Iranian women competing when women were still banned from boxing in Iran.

In fact, even after it was possible for female boxers to register on the federation website, women were still not allowed to participate in actual matches inside Iran. This truth was clearly demonstrated by Hossein Suri himself when commenting about Sadaf Khadem’s participation in the tournament in France. “One day Ms. Khadem came to the federation,” he told the newspaper Shargh. “She had received an invitation to the tournament in France and requested that we arrange things for her. I told her, very respectfully, that the federation could not issue her a permit because female boxing was only at the level of talks and we had no permit to engage in this activity. I have no idea how Ms. Khadem went there and participated in the competitions.”

Whatever mixed messages Iranian sports authorities were sending out, Khadem persisted in pursuing her sport, and it paid off. “I have been waiting for this moment for so long,” she told Reuters. “I hope this first fight will pave the way and that I will go as far as I can to have my name go down in the history of Iranian boxing.”

Not only did Iran’s Boxing Federation not issue a permit to Khadem, it also did not cover any of her expenses, did not provide facilities or a boxing ring so she could practice and did not even allow her to advertise that she was from Iran. She ignored this stipulation, donned a uniform in the colors of the Iranian flag and entered the ring. And when the Iranian national anthem was played, she stood respectfully with her hand on her heart.

Her opponent in Sunday’s match was the French female boxer Anne Chauvin — who has been able to use her country’s boxing facilities for at least 10 years now, unlike Khadem, and who has fought in previous tournaments. Nevertheless, Chauvin lost to Khadem in three consecutive rounds. Throughout the fight, Khadem never stopped punching — perhaps it was partially the result of a frustrated energy that had built up during the years and was now being let out in the ring.

From the Land of Prohibitions

“Sadaf won but it was not the result of the match that was important to anybody,” wrote the French sports daily L'Équipe. “This match went against the history of Iranian women. The barriers are being broken.”

“This beautiful 24-year-old Iranian woman is a boxer unlike other female boxers,” wrote Gilles Festor, a reporter for Figaro. “We must remember that she comes from inside the heart of prohibitions.”

What commentators and reporters wrote about Sadaf Khadem and her victory will be remembered in history — but she has said that what went on in her heart cannot be expressed through mere words. After her hand was raised in victory, her tears started flowing, and she thanked her supporters and her fellow athletes.

Before the fight, the Iranian embassy in France had told Khadem: “don’t talk to anybody”, “go into the ring wearing hijab,” “observe your boundaries” and “don’t shake the hand of any man.” But on Sunday night these ridiculous rules had no place. The night belonged to Sadaf Khadem, who fought beautifully, won and cried with happiness. And then she said: “This victory belongs to all men and women who died so my country could live.”