“Nazanin Worries She Will be Forgotten”

Niloufar Rostami
4 min read
Nazanin Zaghari-Ratcliffe has been accused of espionage and has been used for the Islamic Republic's propaganda purposes
While foreign secretary, Boris Johnson, the UK's new prime minister, incorrectly stated that Zaghari-Ratcliffe had trained journalists

As tensions build between the United Kingdom and the Islamic Republic, Nazanin Zaghari-Ratcliffe, the dual-national charity worker jailed in Iran, fears her plight and her case will be forgotten, her husband says.

IranWire spoke with Richard Ratcliffe, the husband of Nazanin Zaghari-Ratcliffe, on Thursday, July 25.

Days before, news emerged that Zaghari-Ratcliffe had been returned to Evin Prison after being taken to a hospital psychiatric ward on July 15.

Richard Ratcliffe said that, according to the hospital physician, his wife “is suffering from intense depression, constant anxiety, and panic attacks.” But he admitted that he and her family did not have the full picture regarding the state of her health. “Unfortunately, they have not allowed the family access to Nazanin’s medical record,” he said.

According to Richard Ratcliffe, in addition to her frail mental state, his wife Nazanin suffers from pain in her neck, shoulder, and back and has lost some feeling in her right hand and in her feet. “On top of all of this, Nazanin has tumors in her breasts. She was tested back in May and although it was a benign tumor, the doctor said she needs to be tested every six months,” he said.

“These physical and mental problems, and the anxiety Nazanin has been experiencing, are the direct result of solitary confinement, the long period she has spent in prison, and her hunger strike,” he said.

Nazanin Zaghari-Ratcliffe was transferred from Evin Prison to the psychiatric ward at Imam Khomeini Hospital on July 15 after her mental condition apparently deteriorated. She was deprived of visits from her family and was reportedly handcuffed to her bed for the duration of her stay in the hospital until she was transferred back to prison on July 19.

“It was weird that it was the Revolutionary Guards (IRGC) officers that guarded Nazanin’s room at the hospital," Richard Ratcliffe said. "Usually, in her previous visits, it has been the duty of prison guards. The Guards officers did not let her parents visit her and threatened her mother that she would be arrested if she didn’t leave the waiting area.”

Richard Ratcliffe described what he knew about the meeting Nazanin had with her mother and their daughter, Gabriella, the day after she was returned to Evin.“Her mother told me she was skinnier, looked older and more broken than ever,” he said, before adding: “But seeing Gabriella made her happy.”

Richard Ratcliffe said his regular phone calls with his wife Nazanin have resumed, and he most recently spoke to her on Wednesday, July 24. “Nazanin is happy that she was released from the hospital, but she still suffers from anxiety and panic attacks. She also told me that she has been following British politics closely and now worries that the recent changes might mean that she will be forgotten.” 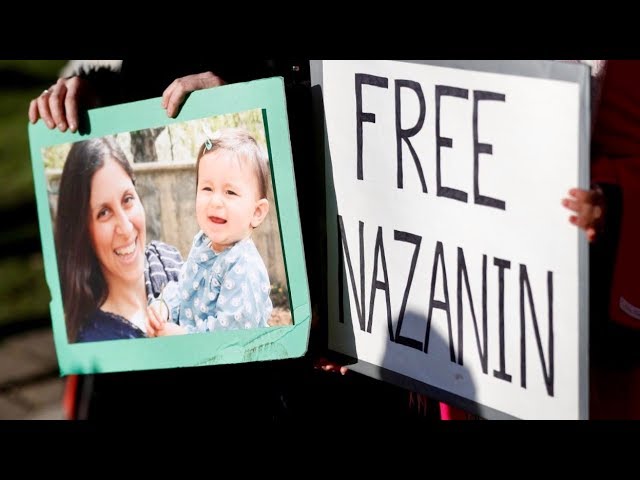 Boris Johnson became the UK’s new prime minister on July 24. During his time as foreign minister, in November 2017, he incorrectly stated that Nazanin Zaghari-Ratcliffe had trained journalists, a comment that may have led to her receiving harsher treatment from Iranian authorities, and even led to new charges being brought against her. Two days after his comments, on November 4, 2017, Zaghari-Ratcliffe was summoned and charged with “propaganda against the regime.” The head of Iran’s Judiciary Human Rights Committee at the time said Johnson’s statements proved that Zaghari-Ratcliffe had traveled to Iran not for a vacation as she had stated, but for more sinister reasons.

Monique Villa, the CEO of the charity the Thomson Reuters Foundation, Zaghari-Ratcliffe’s employer, issued a statement urging Johnson to amend his “serious mistake” regarding his comments about Nazanin Zaghari-Ratcliffe .

Not long after, speculation emerged in both Iranian and British media that she was being held hostage because of the United Kingdom’s longstanding debt to Iran in connection with a fleet of tanks that the Shah purchased from the UK prior to the 1979 revolution. Although officials on both sides denied there was a relationship between the financial dispute and Zaghari-Ratcliffe’s case, it is widely believed her continued detention is linked to the matter.

Back in the 1970s, the two countries signed an agreement for the sale of 1,750 Chieftain tanks from the UK to Iran for 650 million pounds. Iran’s Shah paid the price in full, and only received 185 tanks. Soon after, the Islamic Revolution unfolded and the remaining tanks were never delivered.

On July 25, the Supreme Court in London ruled in favor of the International Military Services Ltd (IMS), stating that the company was not obliged to return the money it had received from selling tanks to Tehran.

Iran also sued the IMS in the International Court of Arbitration in Paris. Part of these IMS shares belongs to the UK Defense Ministry.

Nazanin Zaghari-Ratcliffe is a dual Iranian-British citizen and worked as a project manager for Thomson Reuters Foundation. She traveled to Iran with her daughter in early 2016 to spend the Persian new year with her family. On April 3, 2016, as she was about to leave Iran for the UK, Revolutionary Guards intelligence agents arrested her at the airport. She was initially kept in an undisclosed location in Kerman and then transferred to Ward 2A at Evin Prison, where she remains today. On September 6, 2016, the Revolutionary Court sentenced her to five years in prison on espionage charges, a verdict that was upheld by the appeals court.

'I Learned Freedom in the UK': Iranian-Born Wrestler Melika Balali on Taking a Stand Against Forced Hijab