A Dutch Woman's Frightening Ordeal at an Iranian Stadium

IranWire
5 min read
For the first half of the match, Madelon Bosman watched the game from the VIP box at Tehran’s Dastgerdi Stadium, but she was forced to watch the second half from a building overlooking the field
Kevin Jansen had no idea what was happening during the match, and that his girlfriend had been moved out of the VIP box

The girlfriend of a Dutch footballer who plays for Iranian team Gol Gohar Sirjan has described how she was forced to leave a stadium in Iran, despite getting permission to attend the match.

“They demanded that I leave the box immediately. I got scared," Madelon Bosman, the girlfriend of Dutch halfback Kevin Jansen told the Dutch Broadcast Foundation (NOS). “I was looking at men who were angrily talking to me in Persian and signaled that I had to cover my hair with my headscarf more.”

Bosman says she will think very carefully before going to Iran to visit her boyfriend again. In an interview with tamasha.com, part of the state-run Islamic Republic of Iran Broadcasting, she said she hoped that when she came to Iran in October, she would be able to watch Jansen play, and that other women would be able to watch too. Appearing nervous and unsure, she spoke of Iranians' kindness and her wish to expolore "Iran's beautiful places." When asked what it was like when she was asked to leave the VIP area, she admitted to feeling scared and seemed hesitant to say too much about the ordeal. 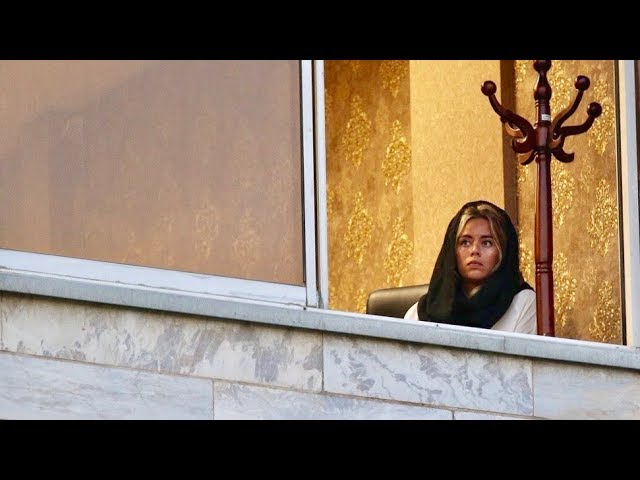 Prior to joining Gol Gohar Sirjan football club this season, 27-year-old Kevin Jansen played as a midfielder for the Dutch clubs SC Cambuur and Feyenoord Rotterdam. When he signed a contract with Gol Gohar, it was agreed that his girlfriend would visit him in Iran and that the club would provide them with their own accommodation. Madelon Bosman arrived in Iran later than her boyfriend — a week after the Iranian Pro League games had got underway for the season — and decided to go directly to Tehran’s Dastgerdi Stadium to watch the game between her boyfriend’s team and Saipa FC of Karaj.

“Kevin and I were aware of the rules in Iran and we knew that women cannot go to stadiums,” Bosman told NOS. “But three-quarters of an hour before the game, the president of the club called and assured me that there was no problem. I relied on that and I went. In retrospect, I might not have done it."

When Madelon Bosman got out of the car, she was warmly received by Saipa and Gol Gohar club officials. She was escorted to the VIP box and was offered a chair and something to drink. Everything seemed fine, and just before the game, the box was at full capacity, mainly with Iranian dignitaries.

At the time, Pejman Rahbar, editor-in-chief of the sports news website Varzesh-e Seh, tweeted: “Ms. Madelon Bosman, the wife of Kevin Jansen, Gol Gohar’s Dutch player, was the only official woman spectator at the second week of Pro League competitions” [Persian link]. He also posted a photo of Bosman in the VIP box.

Pulled Out from the VIP Box

But not long after he had to correct his earlier tweet: “After watching the first half of the game of her spouse’s team from the VIP box, Ms. Bosman was escorted out of Dastgerdi Stadium to an office building overlooking the field and watched the rest of game [Persian link].” Pejman Rahbar also posted a photograph of Bosman sitting at the window watching the game with a look of disbelief on her face.

“During the first half I noticed that the photographers in the stands had turned their cameras toward me,” Bosman said. “But I thought they were taking pictures of the dignitaries. So I paid no attention. Not for one moment did I think I was their subject, but after a few minutes everybody was looking at the pictures.

“About 25 minutes after the start of the match I got a tap on my shoulder. I was asked to leave the box. I got scared. “I was looking at men who were angrily talking to me in Persian and signaled that I had to cover my hair with my headscarf more.”

Bosman describes how she was made to move to another building. “They tried to explain, in Persian and in English, that I was not being arrested,” she said. “The police had been in touch with the stadium’s officials and had asked them to remove me from the stadium.”

During the game, Kevin Jansen was unaware of what was going on with his girlfriend. After the game, the security guards escorted Bosman to a car to take her to the hotel. Bosman used an app on her phone to inform her friends and Kevin Jensen of her location so they would not worry. “Because of her photos on social media, Bosman has become a famous figure in Iran, perhaps more famous than her boyfriend,” the Dutch broadcaster NOS reported.

"I understood Iranian customs and norms only when I returned home,” Bosman said. "I wonder if I can go to see Kevin without any problems, or if it is safe to travel to Iran. Especially because Iran is now so big in the news."

By “big news,” Bosman was perhaps referring to the “Blue Girl,” a football fan who recently set herself on fire as a protest against the ban on Iranian women at sports stadiums. Or perhaps she has read about the wave of arrests of foreign nationals in Iran. Only a week ago, news emerged that an Australian couple had been arrested while traveling in Iran. In August, the Austrian newspaper Der Standard described traveling to Iran as a “suicide attempt.”

FIFA Responds to IranWire about the Death of the “Blue Girl”, September 10, 2019

Ayatollah Gives Thumbs Down to Women in Stadiums, December 12, 2017