Maryam Dehkordi
5 min read
Shahnaz Akmali’s young son Mostafa Karimbaigi was shot in the head during 2009 protests. Since then, she has helped give a voice to political prisoners and their families

Although losing a child to violence is a disaster that most parents do not recover from, Shahnaz Akmali is a grieving mother who has not given up fighting injustice.

Akmali’s 26-year-old son Mostafa Karimbaigi was shot in the forehead in Neauphle-le-Château Street in Tehran during the religious holiday of Ashura on December 27, 2009 as protests shook the capital in the aftermath of the disputed presidential election of that year. It has been 10 years, but not only has Shahnaz Akmali not ceased her fight to find justice for her son, she has also become the voice of grieving mothers like herself.

Shahnaz Akmali, born on March 21, 1965. She married when she was a teenager and when she remembers becoming a mother her voice is filled with joy. When talking about Mostafa, she does not use the past tense. “I have two children,” she says. “I was 18 when Mostafa was born and then came his sister Maryam. All throughout those years we tried to be each other’s friends. The children, their father and I were very close and talked over everything, until that day in 2009 when, after 14 days of searching for Mostafa, we found his body at the coroner’s”.

The authorities have published their account of how Mostafa died, but his mother has repeatedly disputed this official version, and she continues to this day. Authorities presented his death not as murder by security forces but as an accident, claiming that he fell off a bridge as a result of overflowing crowds during the demonstrations. “He was shot on the Day of Ashura,” Shahnaz Akmali says. “Unfortunately, some believe that Mostafa fell off the bridge. No, he did not fall off the bridge. He was shot in the forehead on the left side. The back of his head was gone.”

Throughout the last decade, Akmali and her family stood by the families of political prisoners and mourned with mothers who have lost their children, and have endeavored to be their voice and tell the stories of the injustices that they have suffered. 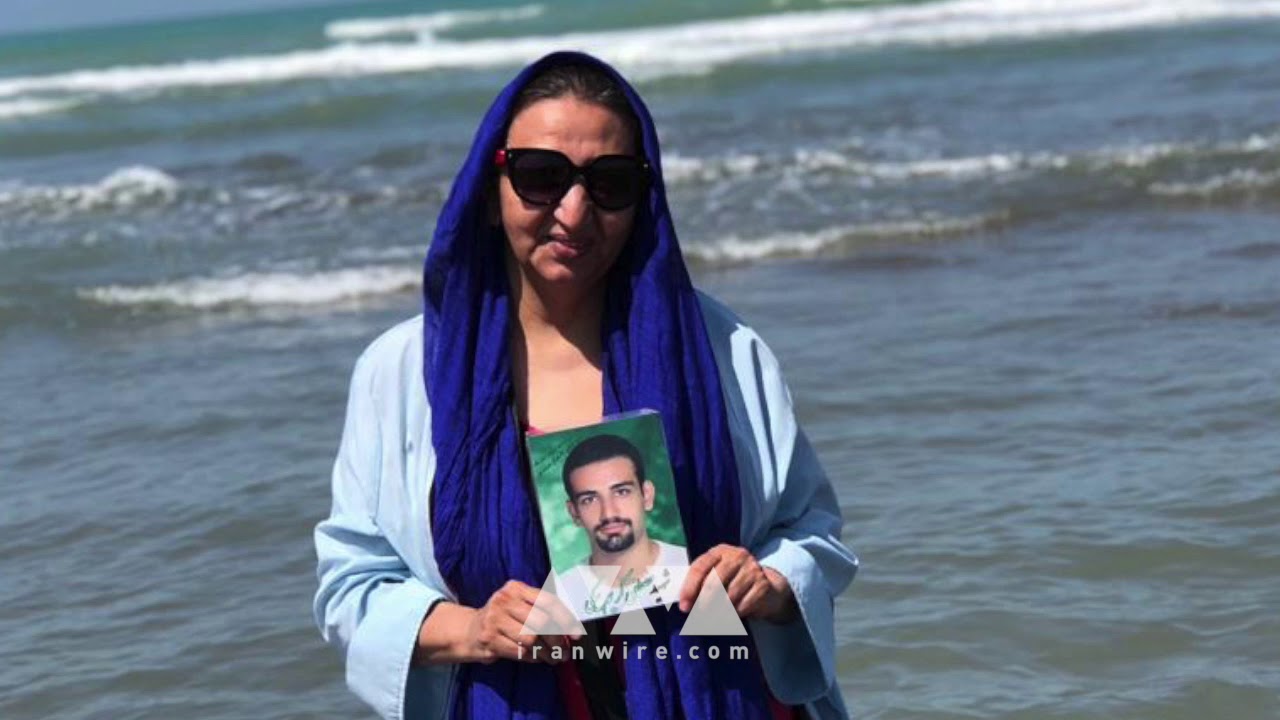 Shahnaz Akmali sings a lullaby over the grave of her son, Mostafa Karimbaigi, who was killed by security forces during protests against the results of the 2009 presidential election

One of Akmali’s most important efforts to tell these stories to the wider public was a documentary she made with Iranian-in-exile Masih Alinejad, the US-based women’s rights activist, about the victims of 2009. When Vahid Sayyadi Nasiri, a young political prisoner at Qom Prison, died in hospital in late 2018 after a 60-day hunger strike, Akmali participated in all mourning ceremonies for him without fearing the consequences and reprisals from the authorities. And when in June 2019, Alireza Shir Mohammad Ali, a 21-year-old political prisoner at Fashafuyeh Prison, was murdered by two dangerous criminals he should not have been on the same ward with, Akrami’s family was photographed standing next to his family.

Shahnaz Akmali has paid a price for her dedication to the cause of justice. During the last 10 years, security agencies have pressured and threatened her and her family. In January 2017, intelligence officials raided Akmali’s workplace and her house in Tehran, confiscating some of her belongings before arresting her. She spent three weeks at the Intelligence Ministry’s Ward 209 at Evin Prison, including 17 days in solitary confinement, and was interrogated without the presence of a lawyer before she was released on bail. On October 29, 2017, it was reported that a revolutionary court had sentenced Akmali to one year in prison on the charge of “propaganda against the regime." She was also banned from traveling abroad, from using social media and from taking part in any political activities.

Akmali later said that the authorities had threatened to kill her daughter if she did not stop advocating for the plight of other families: “They called me again and said: ‘We will kill your daughter the same way we’ve killed your son, so shut up. Stay home and just recite the Koran for your son. We will kill you and your daughter if you leave home.’”

After the lower revolutionary court published its verdict, many Iranians went on to Twitter using the hashtag #MostafaMom to show their support. “Grieving mother put in a cage...to silence her,” tweeted one person. “This is abuse like no other. How dare any man silence a mother.”

Akmali’s daughter Maryam Karimbaigi believes that the arrest of her mother, and of mothers like those of the imprisoned blogger Soheil Arabi and Saeed Zeinali, a college student who disappeared after being arrested during student protests in 1999, only goes to prove their strong influence.

What has made her so full of passion and determination that her name stands out as an influential Iranian woman, IranWire asked Shahnaz Akmali? “You are too kind,” she said, “but if I want to explain this passion it goes back to only one moment: when, after days of trying and of interrogations, we received the permit to bury Mostafa, the security agents said that they themselves would bring his body to the burial site. When they came and, before my eyes, wrapped my son in the shroud and put him in the coffin, I was the first one who went and took hold of the coffin to lift it. Everything started at this moment. It was as though a new woman was born in me, a woman who had a long way ahead of her. I had to cry louder for justice. This new woman helps to not only to give voice to my own person but also to be the voice of others who are bereaved and in pain.”

This is part of a series about influential Iranian women.

Hayedeh Shirzadi, campaigner for education and the environment