"There were so many security forces in the streets in the morning that nothing could be done. The distance between Shiraz Gate and Si-O-Se-Pol, all along the Chahar-Bagh Street, was full of security forces. Unlike two days ago, there were many plainclothes [agents] in the street, all wearing white masks. All around Shiraz Gate, security forces were stationed. There were at least 200 personnel. Plainclothes, security agents, and special police forces (NOPU) with all sorts of military vehicles. Security guards were also deployed around the university. There were five plainclothes standing around the campus, [positioned] every 40 meters. The university was actually besieged. It was martial law — without being declared."

This is the account a man called Armin gave regarding what he witnessed in Isfahan on Monday, January 13. It reveals why, after two days of dramatic, widespread protests during which people shouted radical chants against the whole political system and its highest-ranking officials, on day three, there were few political protests against the regime, except in Sanandaj and at two universities, at Sharif University of Technology in Tehran, and Isfahan University of Technology. As Armin says, the reason was that the country was under undeclared martial law.

However, on January 14, people went back out on the streets, at least in Sanandaj.

The protests followed the Revolutionary Guards’ accidental downing of a Ukrainian passenger plane, a chain of lies from military and political officials — all of whom report to the Supreme Leader Ali Khamenei — denying responsibility for the tragedy, and finally, an admission that the Guards made a terrible mistaket.

According to Iranian officials, the Monday January 13 crackdown managed to keep the cities calm. But this calm, it is plain to see, is more like a burning fire under the ashes, a fire that will burst out again, whether in days, weeks, or months.

Sanandaj: Protests began at University, Spread to the City

On Monday afternoon, protests began in Sanandaj at the campus of the University of Kurdistan. Students chanted: "We are so sick of crime, why should we be afraid? 1500 people were killed in November 2019." The students refused to trample on steps that had been painted with the United States flag. They chanted: "Years of crime, death to Velayat [the system that enshrines the Supreme Leader’s authority over the state]; “Shameless, shameless”; “Solidarity with students, support, support." 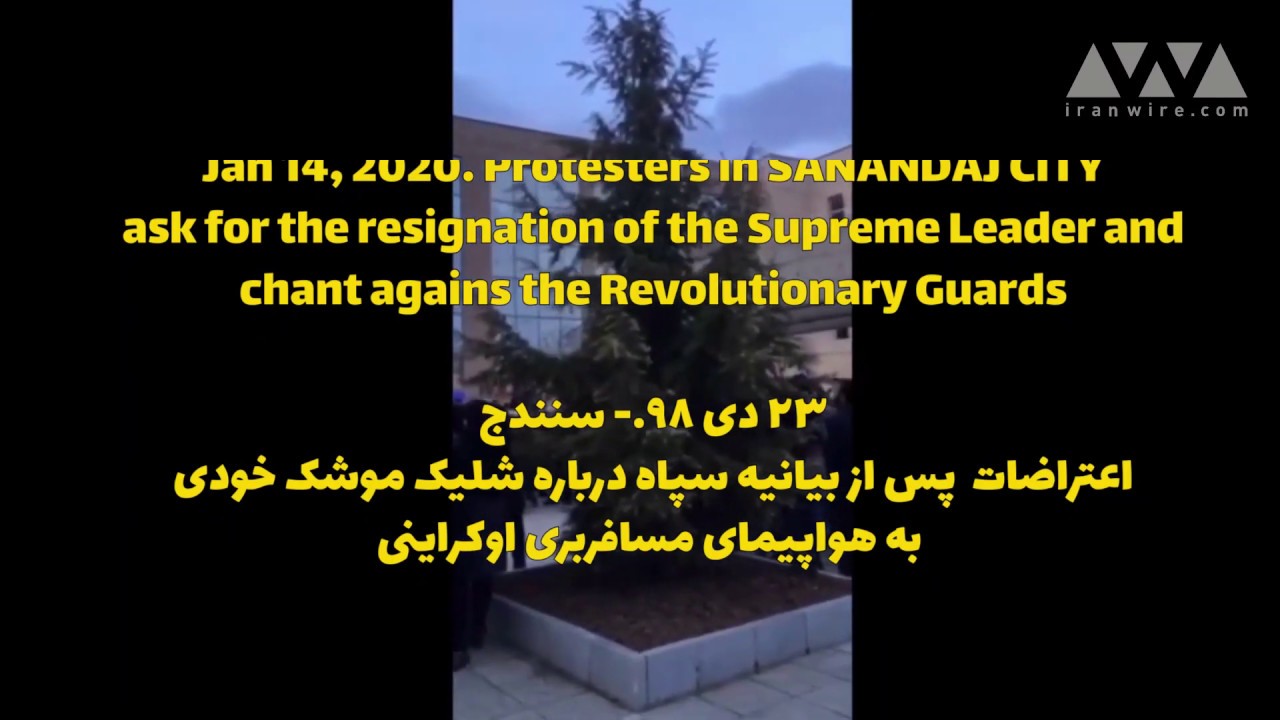 
Rougin, a shopkeeper in downtown Sanandaj, said that during the day, despite semi-martial law being enforced in Sanandaj, sporadic small gatherings broke out in Sharifabad, Sixth Bahman Road, alleys leading to Iqbal Square and other places, all of which were quickly disrupted by security forces, which rushed in. "I had trouble returning home because of guards chasing small groups of protesters, and although the protests were not as big as on Sunday, and there wasn’t complete control of the protests, there was a severe suppression that made the protests very difficult."

Demonstrations and chants in Sanandaj continued into the night, as videos people have shared online and with IranWire show. At sunset and into the night, people shouted:  "Down with Khamenei," and "Our disgrace, our disgraceful Guards."

One of the videos from Sanandaj shows people shouting "No more dictatorship” and "Death to the dictator" while being attacked by security guards.

In a video from the protests in Sanandaj on January 14, a man speaking in Kurdish can be heard saying that half of the protesters are women and girls. This confirms what many people have said about the most recent unrest —women are playing a key role, a marked difference from many previous protests. Some people have said women are the face of the demonstrations, and have dubbed it the  women's revolution.

Isfahan: A City Besieged by Security Forces and Dominated by Protests at the University

Isfahan did not quite experience martial law on Monday in the way that Sanandaj did. "Apparently all offices and shops were open, but the sheer volume of security forces stationed around the city, and their equipment and vehicles, actually gave the people a sense of insecurity,” Armin said. “Everyone was expecting something to happen at any time."

According to Armin, the largest security force presence was between Shiraz Gate and the historic Si-O-Se-Pol bridge, all along Chahar-Bagh Street: "Shiraz Gate was overpowered. I went out of the house at eight this morning, and that was the situation until the evening. There were maybe more than 200 people there. There were also some water cannon and fire extinguisher vehicles. Their forces and equipment were different in various places. For example, in Nikbakht Junction, they mostly had batons, but they were equipped with paintball guns at the next crossroads, or tear gas and tear gas launchers at the next intersection." 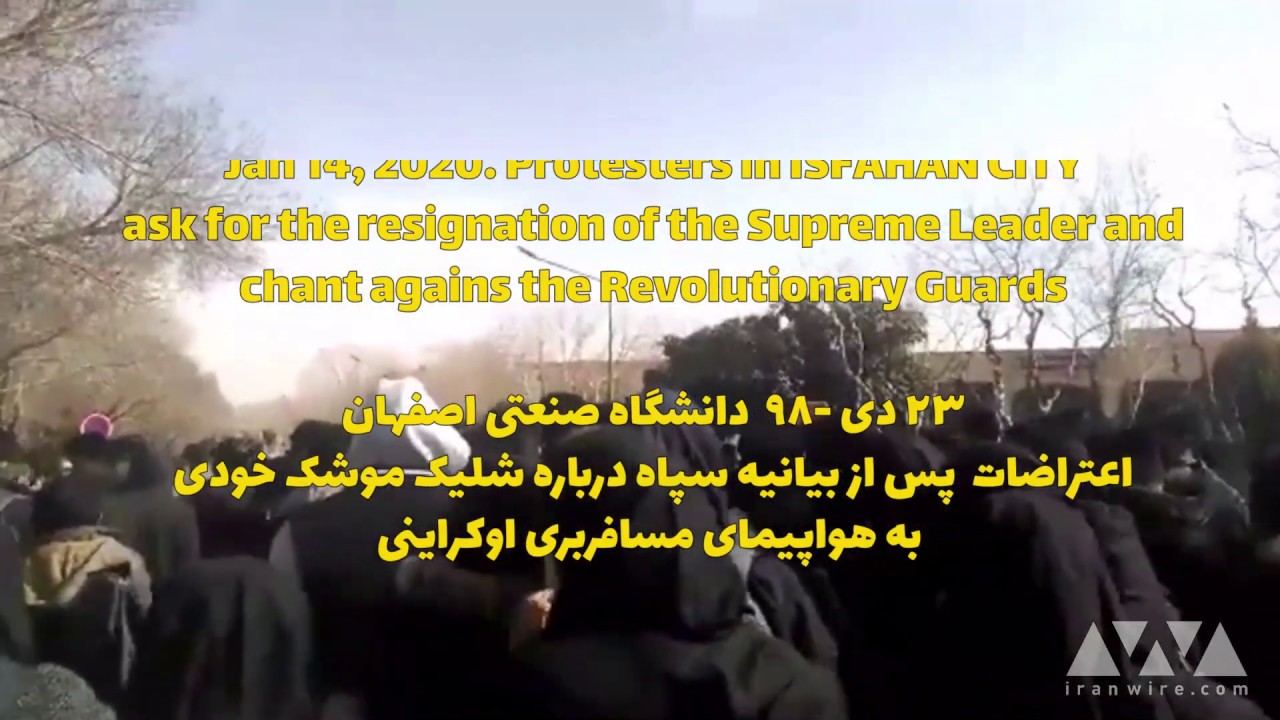 There were big protests at Sharif University of Technology on Saturday and Sunday, but it was relatively quiet on Monday — or at least there were no reports of protests. However, some students at Al-Zahra University hung photographs on the wall of some of the passengers who had died in the plane crash, lighting candles to commemorate them and singing: ”From the Blood of Homeland Youths, Tulips Have Grown." 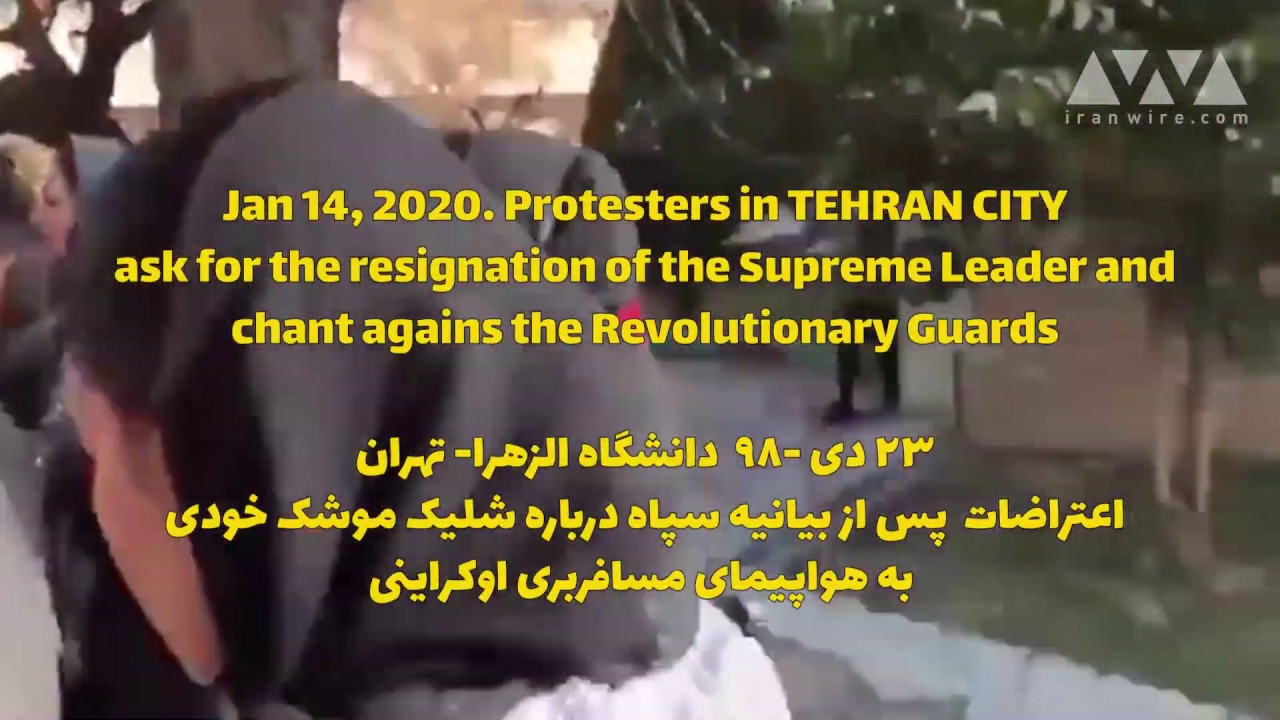 A man going by the name of Manouchehr who lives in the suburbs near Enghelab Square and took part in the protests in Tehran on Sunday, says the number of security and military forces near Enghelab Square, Azadi Street and Azadi Avenue was as high as it could be, making any protests impossible. "The number of agents was terrible. There were fewer people than agents. No one was taking a risk because you could get arrested even before any gathering was formed. For the first time, I saw plainclothes [agents] in two to three-person groups on the sidewalks above Azadi Street and near Tohid Square, with small radios in their hands."

Manouchehr said some of the security forces seemed to be in disguise. "Some of them were wearing traffic agents' uniforms, which made it difficult for me and anyone familiar with the area to identify them. I was passing by a police vehicle car at 5pm. The driver was in plainclothes, but four agents who came down were all wearing traffic officers' uniforms and masks. The traffic officers were on one side of the street, and these type of agents were on the other side of the street along the whole length of Azadi Street."

Siavash, who attended Sunday's rally at Azadi Square and who spoke to IranWire previously, said the security forces were abundant throughout the city, but he did not think they were much larger than on the crowds on Sunday, January 12. "At the Somayeh Street intersection with Hafez Avenue and at the eastern door of the Amir Kabir University, the presence of anti-riot forces with water cannon vehicles was more pronounced. Also, in some of the alleys and suburbs near the main streets and squares, security forces inside buses and minibusses were waiting to take action if a rally began."

Unconfirmed reports on the rally on the campus of Amir Kabir also emerged on Monday, January 13, but videos did confirm that a significant number of students arrived outside the Sharif University of Technology to make their explicit and radical protest against the government, the Revolutionary Guards, and the Supreme Leader heard. At Sharif University, one controversial chant was: "They killed our elites, and replaced them with mullahs."

In addition to political slogans shouted by Sharif University students, some students spoke out against university officials. This followed the announcement that university directors had canceled all university exams scheduled to take place on the afternoon of Monday, January 13, as well as a mourning ceremony that had been planned by the Islamic Association. 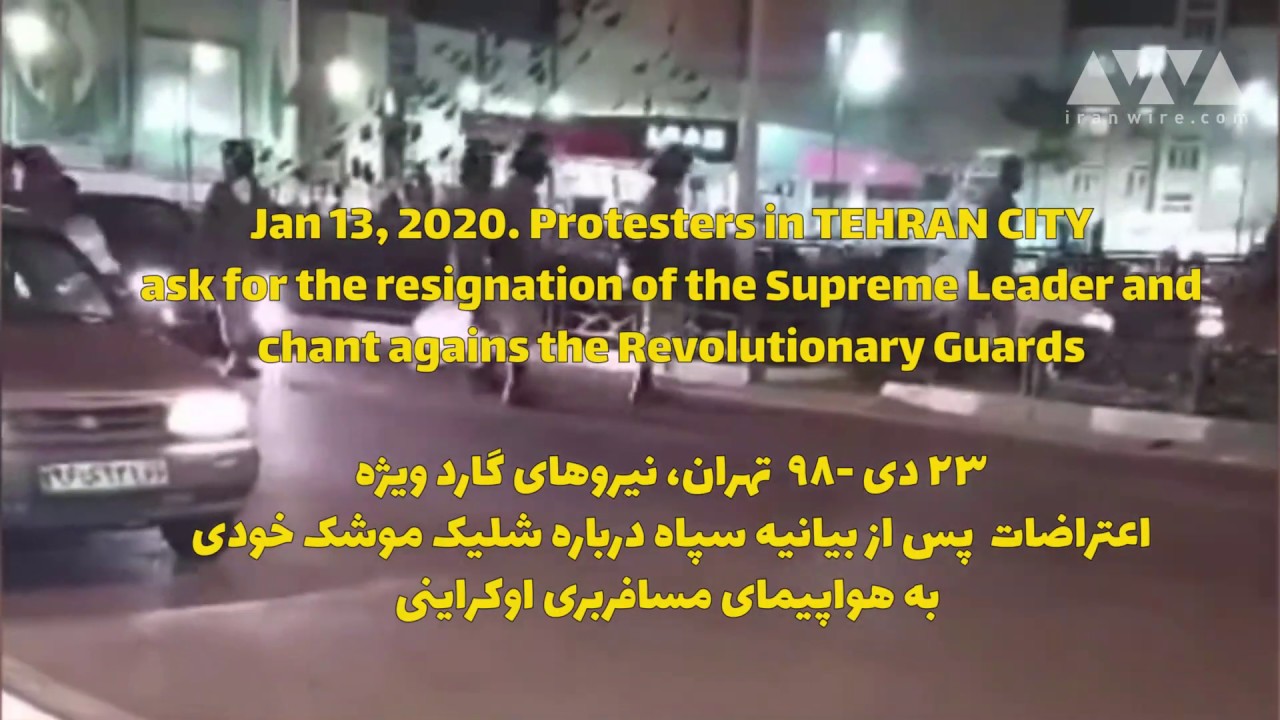 Protesting students said they believed the university officials made the decision under pressure from outside institutions that did not have such authority over the university. "We do not want coward directors," the students shouted. Then, when the president of the university addressed the students, calls of "Resign, Resign” could be heard. 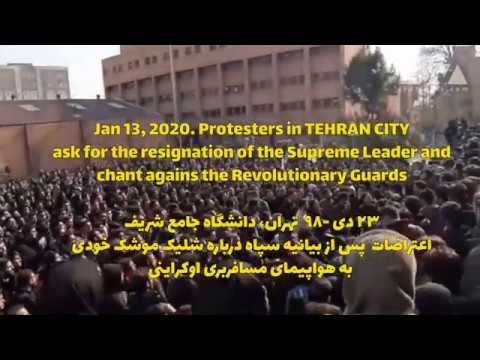 
Another video shows angry students shouting, “Liar!” After the head of the university said no one had pressured him to cancel exams. 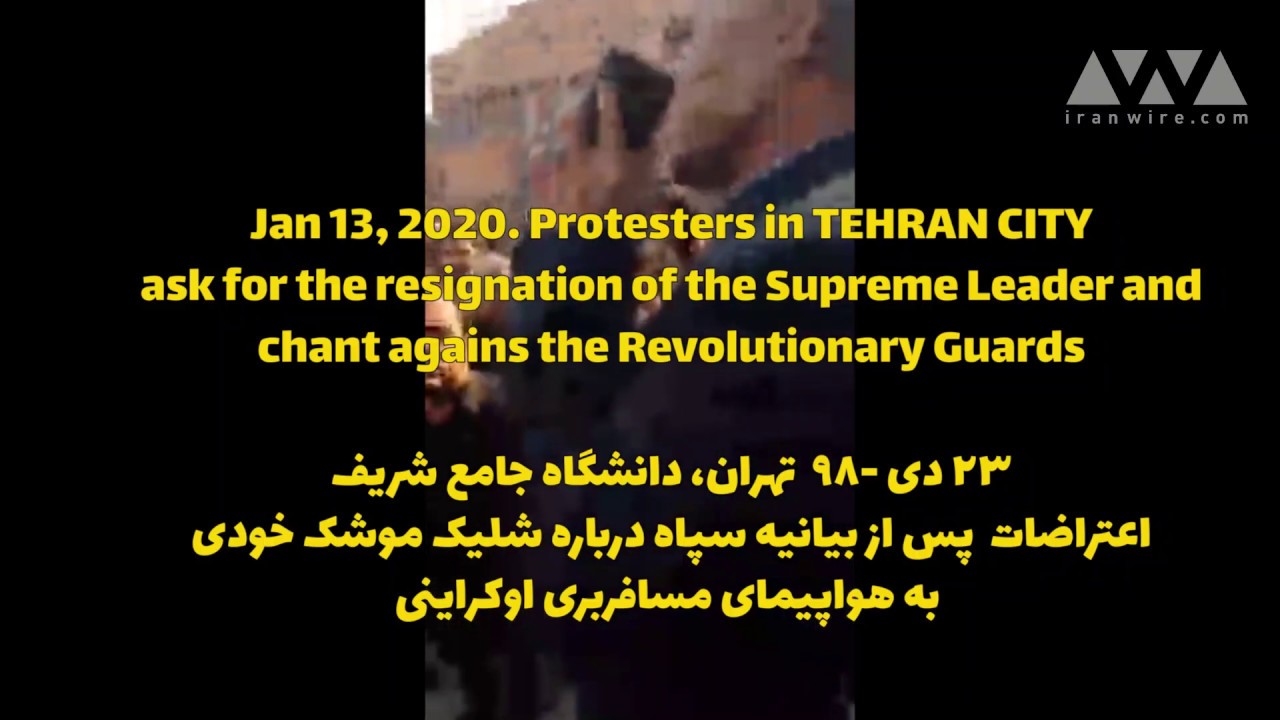 
In another short video, one student says, “For sure if the flight was not a flight with foreigners on it, the Iranians wouldn't have known what was going on." Another says, "We want transparency. This country has not been transparent for many years, everyone is lying to us. They have considered the people to be ignorant and they have been lying to us for years, people have been fooled for years ... The leader of the country must answer us if he has done wrong. Mr. Khamenei, why are you lying?" Another student says: " ... let us do something to end this filth, let us end the endless lies." 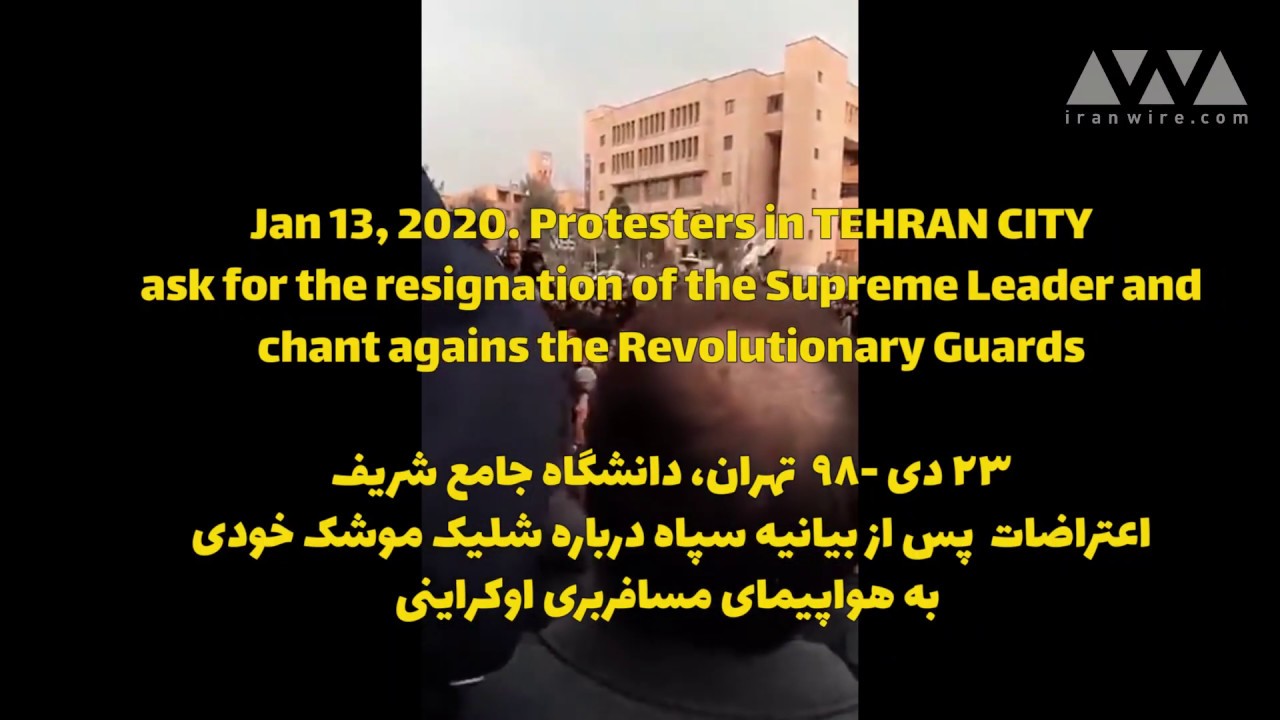 Three female detainees have been transferred to the general prison in [northern] Amol city after being arrested on Saturday, January 11. In addition to these three, according to Amoli activists, at least 16 detainees remain in the city's security police detention facility, although their families have been told they have been handed over to the Revolutionary Guards’ intelligence department. 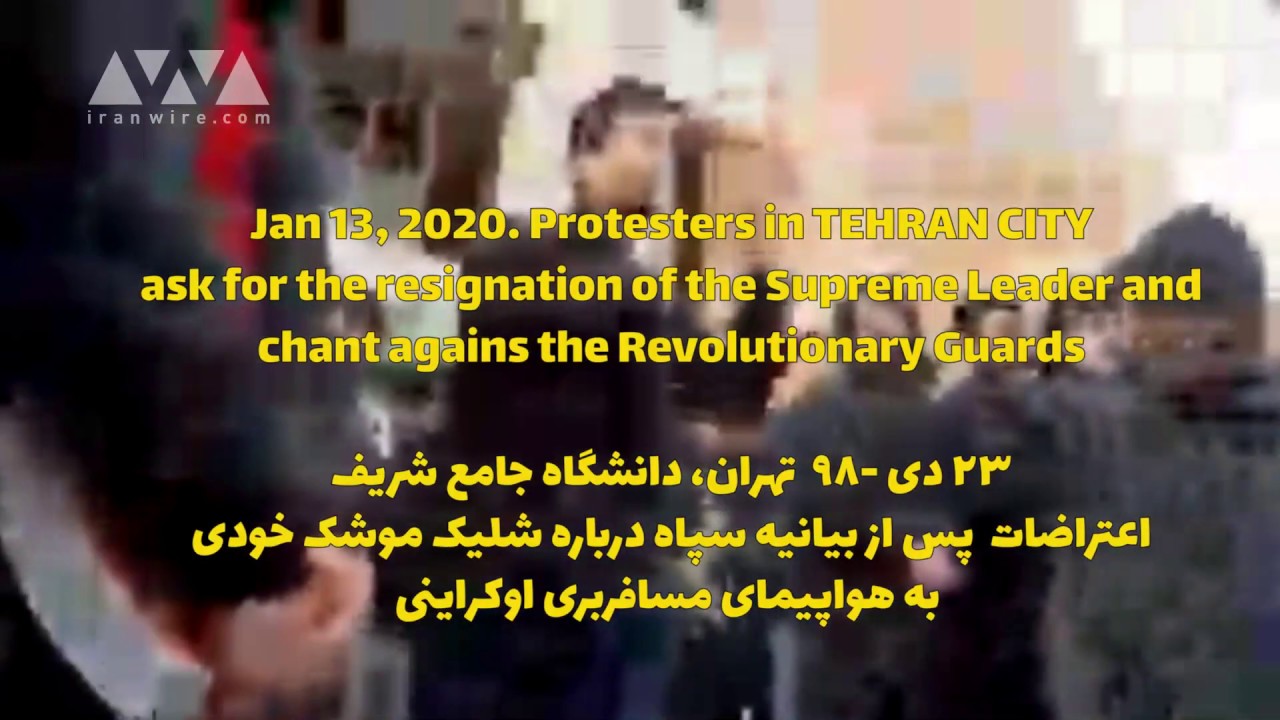 In Kermanshah, a number of protesters were also arrested, including two students at Razi University: Nabi Tardast, a Master's degree student in sociology, and Salah Qgharibi, a veterinary student, both of whom were arrested on Sunday evening during a rally.

Asadullah Fakhimi, a Tehran-based civil activist, was among those arrested Saturday at Tehran's Amir Kabir University.

Mohammad Esmaili, a senior student of photography at the University of Tehran, was also arrested Sunday night near Azadi Square.