Shahed Alavi
6 min read
Saeed Soltanpour, a Gonabadi dervish prisoner in Karaj Central Prison, has reported that a prison ward has been evacuated and turned into a quarantine area for prisoners with coronavirus
News has emerged that a prisoner has died from the coronavirus in Greater Tehran Prison, also known as Fashafuyeh Prison
A former Karaj prison official said that the fact that visits have been banned and temporary leave has been canceled does not necessarily signal a coronavirus outbreak

"They came in the morning without any notice and told us to pack our belongings because they wanted to move us. When we asked why we were being moved, where we were going, and why they were only telling us now, they didn't answer,” Saeed Soltanpour, a Gonabadi dervish prisoner at the central prison of Karaj, told me. “There seems to be a coronavirus outbreak in the prison; they canceled visits and temporary prison leave. There were two of us dervishes in a special security ward, and we were transferred to a six-meter cell in the workers' ward that had formerly been a single cell and now accommodates eight people. They now say that our former ward, behind the medical facility, has been allocated to prisoners with suspected coronavirus."

Soltanpour is one of eight Gonabadi dervishes who were transferred from Fashafuyeh Prison to Karaj Central Prison and, on February 25, without prior notice, were again transferred, this time to a small cell.

A former member of staff at Karaj Central Prison also quoted a prison guard, who confirmed the evacuation of the prison's ward for political prisoners, saying it is being used as a quarantine area for prisoners suspected to have been exposed to coronavirus due to its proximity and easy access to the prison's medical facility. "I am not sure whether there was a suspected coronavirus case at Karaj Prison, but given the prisoners’ close contact with prison guards and officers who are in constant contact with the outside, there is a risk that coronavirus has reached the prison." 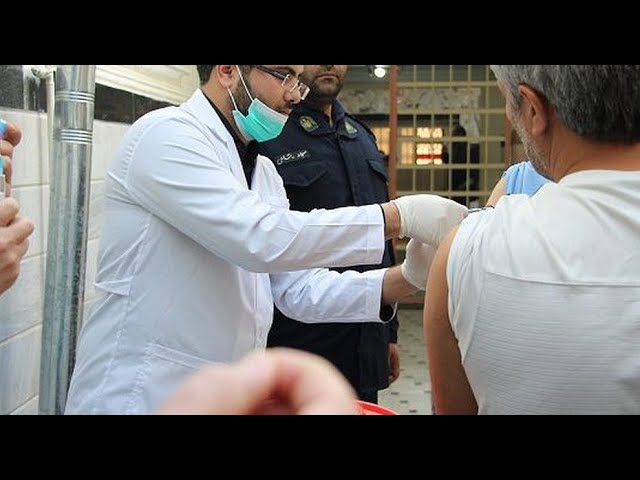 According to the former Karaj prison official, the fact that visits have been banned and temporary leaves have been canceled does not necessarily mean there is a coronavirus outbreak, and it could be a simple preventive measure. But he also added that it could be too late: "The big problem is that the prison environment is very polluted and  transmission could be much faster due to over-crowding and non-compliance with health guidelines. And because the prisoners are also physically more vulnerable to diseases, the probability of a higher coronavirus mortality rate in prisons is much higher. If a prisoner gets the virus when he visits someone or leaves the prison for a few days, this can affect the whole prison."

Dervish inmate Saeed Soltanpour also said that the workers' ward where he and seven other dervishes were transferred to is unhygienic, which means their lives are at risk. The inmates held in this ward usually have regular access to all areas of the prison, so they could be unknowingly responsible for the transmission of various viruses and diseases. Soltanpour released an audio file, in which he said that prison authorities had given the prisoners gloves and masks. Doctors have recommended frequent and regular handwashing as one of the most important preventive measures, but Soltanpour says there are only two toilets for 75 prisoners in the workers' ward.

Concerns about the spread of the coronavirus in the country's prisons are not restricted to the central prison of Karaj. Shahrzad Izadi, the wife of Anousheh Ashouri, an Iranian-British dual national in prison in Iran also reported that her husband had told her on Monday, February 24 that a prisoner in Ward 4 of Evin Prison had been infected with coronavirus. Given the prison environment and the way in which prisoners are housed together, if a coronavirus diagnosis is correct, there will be concern that a large number of inmates at Evin Prison could also be affected.

However, the Prisons Organization appears to have taken no further action to counter the danger of a coronavirus outbreak in the prison apart from the suspension of visits and temporary lave, and the allocation of a special ward for prisoners suspected of having coronavirus. As of Monday, February 24, no guideline or special directive to counter the spread of the coronavirus has been prepared or communicated to Iran's prisons.

But in some provinces, local authorities have taken measures to counter the spread of coronavirus in prisons, at least through setting up meetings and informing the public. In Kerman, officials from the province's Prisons Organization and the province's medical authorities held a videoconference for provincial chiefs to advise them on being prepared to tackle the disease.

Isfahan Prisons Organization chief also said that in addition to restricting visits, measures such as suspending prison sentences, granting leave to older prisoners, supplying and distributing hygiene and disinfection facilities in the prison and the distribution of masks available to specific prisoners have been taken. It is unclear whether the suspension of sentences and the granting of leave to older prisoners will include political prisoners and prisoners of conscience or not.

There are also reports that an inmate in Greater Tehran Prison, also known as Fashafuyeh Prison, has died from the coronavirus. According to reports obtained by IranWire, a 54-year-old prisoner named Mustafa Ashkbus, has died after contracting the virus. Ashkabus, who was serving his time in what is known as a “type 1” ward at the prison and had been hospitalized at the medical center at Fashafuyeh Central Prison for the last few days, was reported to have died on the evening of Sunday, February 23. Fellow inmates say he was showing coronavirus-like symptoms before he was admitted to the prison clinic.

However, it is difficult to ascertain the cause of Ashkbus’ death, as the prisoner's medical record does not specify why he died. The same source I spoke with said that after the prisoner's death, the section of the prison Ashkbus was in was quarantined, and even prison officers were not allowed to leave. If this news is true, given the poor conditions at Fashafuyeh Prison and the lack of direct communication between wards where ordinary criminals — non-political prisoners — are held. Considering the volume of prisoners held on these wards and the lack of essential medical care, hundreds of people’s lives could be at risk.

The brother of a political prisoner held at Fashafuyeh Prison says the lack of clear and accurate information about what is really going on has made them very frightened about the fate of their loved ones. "In China, with all its precautions and quarantines, the virus has reached the prisons. But in Iran, which sets an example of irrationality, chaos, and irresponsibility, there is serious concern about the widespread contamination of prisons with coronavirus. The lives of our loved ones are in danger."

But China's experience is hard to compare with Iran's. On Friday, February 22, the media reported that there were cases of coronavirus infection in two Chinese prisons. According to the news, Chinese authorities have identified and quarantined a number of patients in two prisons after testing them and dismissed several prison officials and higher authorities. Under similar circumstances, how can Iranian officials, who are ill-prepared and unable to perform accurate coronavirus tests, perform a diagnostic test on all inmates and quarantine those people in the prisons who are infected? With the spread of the coronavirus, the lives of prisoners are at serious risk.