Demonstrators in Tahrir Square in Baghdad have contacted IranWire to call on the international community, the United Nations, and the European Union to protect them from the mass killing of protesters by parties and militias targeting them in Iraqi cities.

Despite security restrictions implemented by Iraqi forces blocking media from Tahrir Square, with great difficulty, an IranWire reporter was able to enter the square and interview demonstrators.

On February 26, demonstrator Ali Hamzah said, "For 16 years the parties' hands have been stained with the blood of honorable Iraqis... the Iraqi people who rose up in the October Revolution have sacrificed 800 people so far. Those [responsible] will be held accountable, and their end is very close."

In a press statement given to an IranWire reporter in Baghdad, Bahjat Talib, a journalist in Tahrir Square, said, "The Iraqi people have exploded in the face of the rulers, and the political parties and gangs that are linked to Iran.” Talib added that protecting protesters has become an international issue, and described what is happening to Iraqi demonstrators as an "international genocide."

He said that Iranian militias have freedom of movement and are working on demographic change in Iraq, and that they assassinated a demonstrator a few days ago with a gun with a silencer in Tahrir Square. 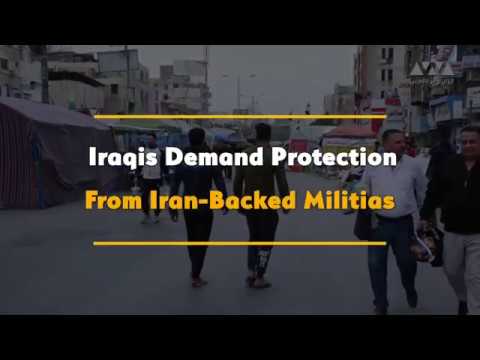 Special Representative of the Secretary-General for the United Nations Jeanine Hennis-Plasschaert has condemned the use of "hunting weapons" against demonstrators in Iraq, renewing her call for the protesters’ protection, according to the United Nations News website.

"The continued pattern of the use of excessive force, with ambiguously identified armed groups and unclear loyalties, is a grave security concern that must be tackled urgently and decisively,” she said. “Peaceful protesters should be protected at all times."

Hennis-Plasschaert explained further: "Information has been received from Karbala [south] on the use of similar projectiles, causing the injury of more than 150 protesters in January alone."

Iraq has witnessed unprecedented protests since the beginning of October 2019, which have been interspersed with violence and have left more than 600 people dead, according to the country's president Barham Salih and Amnesty International.

Since demonstrations erupted on October 1, Amnesty International has documented the use of lethal force by security forces against peaceful demonstrators, including live ammunition and the use of tear gas canisters meant for military use, which cause fatal and horrific injuries, as well as kidnappings and enforced disappearances.

Exclusive: Sareh, an LGBT+ Blogger on Death Row in Iran, in Her Own Words

World Cup Countdown Special: Everything You Need to Know About Iranian Football