Ahmad Salloum
3 min read
Over the past few months, Israel has launched dozens of raids against Iranian targets across Syria
There are reports of significant casualties in the latest attacks, including 10 members of Shia militia the Liwa Zainabiyoun Brigade

Umar Al-Ahmad, an IranWire correspondent in Syria, reports that four Israeli warplanes bombed the Tal Al-Sahn area in the countryside of Al-Suwayda Governorate on the morning of 23 June, not long after military reinforcements affiliated to the Iranian militias arrived in the area. There were reportedly a number of casualties and the militias' armories were destroyed.

The casualties that have so far been identified include Hadi Hassan Al-Jaramqani, Mustafa Ahmad 'Alaywi, Hassan Mari Ahmad, and Haytham Jihad Jablawi, all of whom are members of the Iranian Revolutionary Guards Corps.

According to the Syrian regime's official media outlets, two were killed in the attack and four others wounded. But based on the reports of sources near the targeted area, our correspondent affirmed that the number of dead and wounded among the militias' ranks was significantly higher. The injured were transferred to Al-Basil Hospital in Salkhad.

The pro-opposition network Syria TV stated that Syrian air defences intercepted the Israeli strikes in an airspace over the city of Al-Suwayda.

Our correspondent explained that the site targeted in the Governorate of Al-Suwayda was in the city of Salkhad, east of the town of Al-Harisa, which is part of Tel Sahn: as such, it constitutes an air defence position under the authority of the IRGC.

The Israeli air force also targeted sites in the Kobajjep region of Deir Al-Zour Governorate, which is also affiliated with the IRGC. This resulted in the deaths of 10 members of the Shia militia the Liwa Zainabiyoun Brigade, in addition to the destruction of its headquarters, where military warehouses and a radar point are located, on the road to Palmyra. 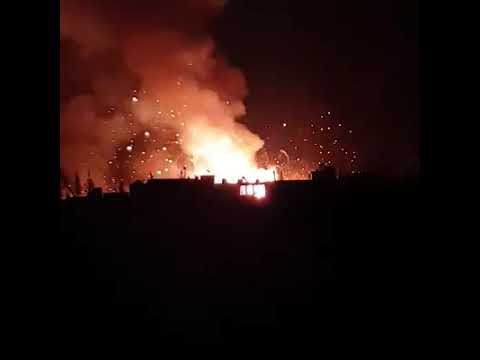 Just few hours later Israeli aircraft headed to Hama Governorate, bombing the Al-Salamiyah area: specifically an onion-drying plant which Iranian militias had taken as a warehouse for various weapons and ammunition. This attack also targeted a feed station in Aqirbat, north of Al-Salamiyah city, and the cultural center in the town of Al-Sabourah in Hama. According to Al-Ahmad, all these locations constitute the Iranian militias' points of influence.

Our correspondent further indicated that the Israeli bombing targeted the headquarters of the Syrian government unit the 46th Regiment in the western Hama countryside, leading to 20 casualties.

For its part, the army of the Syrian regime simply stated that Israeli air raids had targeted sites in Hama on the evening of 23 June. They stressed that air defences had intercepted hostile targets in the sky above the city of Hama.

"The Israeli enemy carried out a new air attack that targeted several of our locations in Al-Salamiyah and Al-Sabourah in the Hama countryside,” one statement read. “Immediately upon discovering hostile missiles, our #air­_defenses dealt with them by pursuing, targeting, and shooting down a large number of them before they reached their targets, limiting any material damage.”

A senior defector from the Syrian army and a source from a regional intelligence agency told Reuters that an Iranian armory near the city of Al-Salamiyah was ablaze following the bombing, while a command center run by Iranian armed groups in the town of Al-Sabourah was also severely damaged.

Over the past few months, Israel has launched dozens of raids against Iranian targets across Syria and has acknowledged responsibility for many of them since the beginning of the Syrian revolution in 2011.

Israeli Defense Minister Naftali Bennett said: "There is nothing for Iran in Syria. We will not stop until the Iranians leave Syria.” He added that Iran entered Syria in the context of a war that has been raging in the country since 2011, seeking to establish a location on the Israeli border in order to threaten cities such as Tel Aviv, Jerusalem and Haifa. “Iran has become a burden,” he asserted. “While in the past it was a source of strength for Syrians, helping Assad against ISIS, it has now become a burden."

Israel has reiterated that it will continue to respond to what it describes as Iran's attempts to consolidate its military presence in Syria and send advanced weapons to Hezbollah.

The Ayatollah and Women on Bicycles