The Death Penalty and Religion: An IranWire Webinar

IranWire
8 min read
“According to Christians, only the one who has given life can take it,” said Farshid Fathi, a Christian Biblical instructor
Zoroastrian cleric Kamran Jamshidi said the religion did not approve of death as an appropriate form of punishment
Sociologist Shadyar Omrani said as societies progressed, religious leaders asked a crucial question: When is it that God should supersede human authority?
Mahmood Amiry-Moghaddam, the director of the Iran Human Rights organization, describes the Islamic principle of qisas as "double oppression"

Pooya Dayanim, head of the Iranian Jewish Public Affairs Committee (IJPAC), had also agreed to take part, but was unable to join the discussion due to unforeseen circumstances.

IranWire also invited speakers from the Bahai faith, the Yarsan faith, as well as representatives from other branches of Christianity and Islam, but none were available to take part in the web discussion. Future webinars will aim to include them.

To begin with, the panelists were asked: What are the different religions’ beliefs regarding the right to life?

“The core of Iranian culture is based on the worth, or sanctity, according to Zoroastrians, of life and wisdom,” said Zoroastrian cleric Kamran Jamshidi. “To hurt life is to hurt God Himself. The root of everything is life. Life needs to exist first for wisdom to come about. Wisdom can then be a guard for life.”

Christian Biblical instructor Farshid Fathi said that, according to the Bible, humans are formed of soul, life and body. “According to Christians, only the one who has given life can take it,” Fathi said.

“Since God gives life, only He can take it,” he added. “The New Testament does not give permission for anyone to take life."

“With the progress of human society and the dawn of capitalism, internal contradictions in society gave rise to a question: When is it that God should supersede human authority?” sociologist Shadyar Omrani said. “In the modern age, humans are at the center and human society has less need for God for survival.”

“The Universal Declaration of Human Rights (UDHR) considers the right to life be the most fundamental right that is prior to other rights because without it, no other right has any meaning,” said Mahmood Amiry-Moghaddam, the director of Iran Human Rights. “The UDHR matters because for the first time in history, there was an agreement on rights that all human beings are entitled to. It doesn’t matter where people live, what their religion is, or the color of their skin or what physical condition they are in. When you see how many problems there are in reaching a consensus in today’s world, you can appreciate that this was a huge step. The declaration says that everyone has the right to life, liberty and security of person.”

Addressing the issue of punishment that deprives an individual of life, Amiry-Moghaddam pointed to Article 6 of the International Covenant on Civil and Political Rights, which states that “no one shall be arbitrarily deprived of his life.”

Kamran Jamshidi was asked if the Zoroastrian Avesta texts prescribed the death penalty.

“What has passed to us from history, of all that has remained from Avesta, the [Middle Iranian language system] Pahlavi scripts and the rest, I have never seen the killing of humans to be used as punishment,” he said. “The enemy of life was Ajidehak, better known az Zahak, who ate the brain of youth to destroy wisdom. Led by Kaveh and Fereydoun, people overthrew him. And what did they do to him? They didn’t kill him, but took him and jailed him on Mount Damavand. In this culture, we see that he was barred from hurting society, but his life was not taken.”

“Islam also affirms the right to life and it holds it as an unparalleled value,” said Islamic scholar Sedighe Vasmaghi. “But what’s said about Islam, especially by Islamic jurisprudence (fiqh) is at times very different from what we find by research into primary sources. On the principle of qisas (retaliation in kind), the Islamic jurists consider it to be obligatory and a form of revenge and punishment. According to them, when someone commits murder, he must be killed. This is an incorrect interpretation. What Islam and the Quran consider as obligatory is for the punishment to be proportional to crime, i.e. this balance shouldn’t be upset. If you want to punish, you need to do so proportionally. But you also have the option of not punishing. There are many verses in the Quran that show that. The interpretation of Islamic jurisprudence has led to much misunderstanding about Islam. One would believe that Islam doesn’t respect the right to life and prescribes capital punishment as a legal penalty. This is fundamentally incorrect.

“Other religions are the same,” Vasmaghi said. “The Old Testament has the same principle in a different wording. The New Testament also affirms this proportionality. The Quran is the same. Jurists claim that “an eye for an eye” means that if someone took an eye out, their eye should be taken out. But the Quran doesn't say that. It speaks of proportionality. If you forgive, the forgiveness can pay for your sins.”

Responding to Vasmaghi, Farshid Fathi said: “Not only does the New Testament not endorse qisas, there are very clear verses that exclude such punishment. A complaint made against Jesus Christ was that he has abolished such penalties. In the Gospel of John, Chapter 8, when they want to stone a woman for adultery, Jesus asks for the first stone be thrown by someone who has no sins... he then forgives the woman. In the Gospel of Matthew, 5:38, such punishments are officially lifted.”

On the question of proportionality and principle of qisas, Fathi asked: “If proportionality means taking a human life, what kind of a proportionality is this? One life for one life? It is better to forgive. The first Shia Imam, who was killed by a sword blow by Ibn Muljam, asked his murderer to be struck only one time. Well, obviously Ibn Muljam would lose his life by that one blow. If forgiving is better, why is it not practiced by the best people in this group? When they put Jesus on the cross, he said ‘Father! Forgive them, for they do not know what they are doing.’”

Who Should Have the Power to Take Life, God or Humans?

“I am here as a sociologist,” Shadyar Omrani said. “I speak based on science, history and what has happened in the past. I see human society in the process of its development. Pastor Farshid Fathi said some very interesting words. In the Sermon on the Mount, we see that Jesus distanced himself from the Old Testament. This might have been a departure by proponents of Jesus from a society in which the Israelites were heavily suppressed by the Roman kings. In other words, Jesus is attempting to rescue the Israelites and he will do anything to achieve this as a reformer, as someone who gathers a people, to guarantee survival of society. The idea of God appeared in human society when humans started a settled life and had to think of their survival. It was important to keep human population up because you needed a labor force for agriculture.

“We see the same thing in Zoroastrianism,” Omrani said. “Zoroaster rises against the gods before him and Mithraism and this is when agricultural society is increasing in size. That’s why in the Gathas, we don’t see capital punishment or the elimination of humans but we do see killing. Even when religions haven’t prescribed capital punishment, when they came to power, whether in case of Zoroastrianism or Christianity, they did practice it. Catholic Christianity has a dark history in this regard. As for Islam, it has been involved in governance since its beginning. This is not true about Zoroastrianism or Christianity but it is about Islam. That’s why Islam needed a mechanism to control individuals in society. The mechanism is held by a god who can take life and his messenger now has this power to take life on His behalf.”

Speaking about qisas, Amiry-Moghaddam said: “I believe qisas to be a feature of totalitarian systems. These are systems that want to control all aspect of peoples’ lives but they also want to blame things on someone. In other words, they want the very people who they oppress and control to work for them as potential foot soldiers. The death penalty is always inhumane but when you turn someone who is a victim of violence and has lost someone into a person who now causes the execution of another human being, this is double oppression.”

The full webinar can be viewed on IranWire’s Youtube channel: 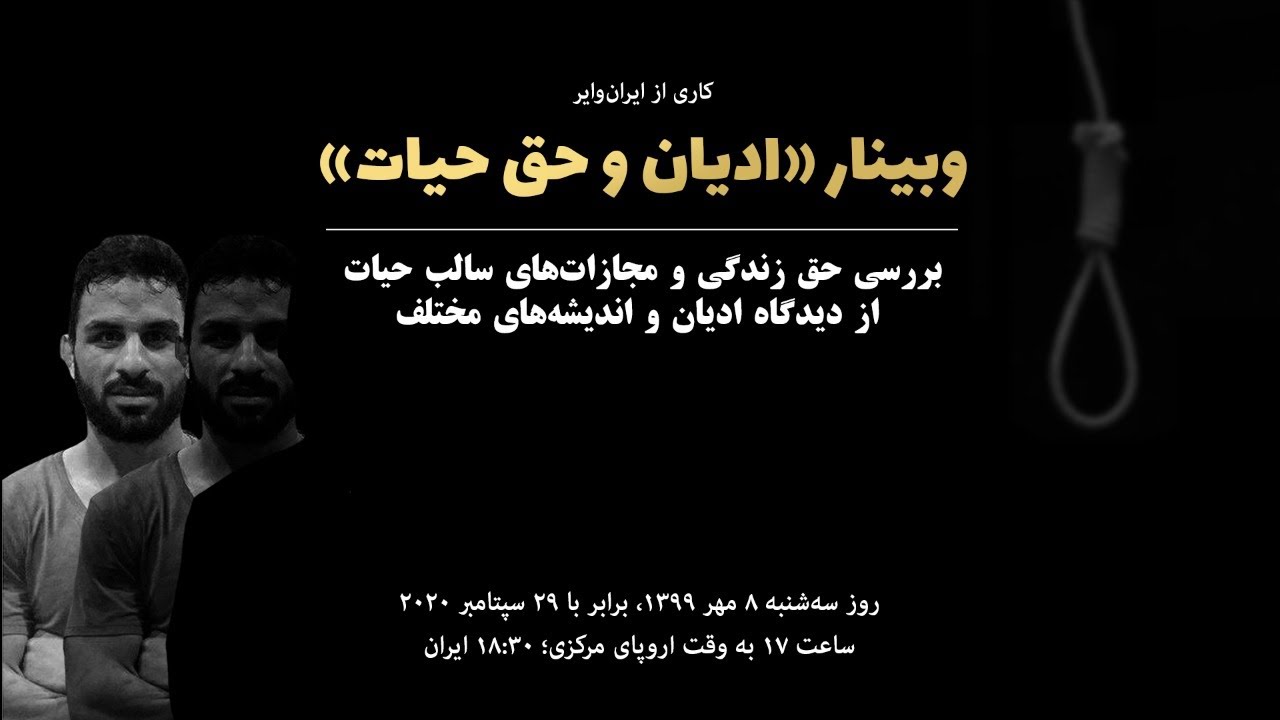 IranWire would like to hear from experts on religion, spirituality, human rights, philosophy and ethics. If you would like to present in future webinars, suggest other speakers or topics, or share your opinion please contact IranWire by emailing [email protected]

You in IranWire
6 min read
Continue to next article