Javad Motevali
9 min read
A nationwide strike by workers in Iran’s oil, gas and petrochemical industries entered its fifth consecutive week on Saturday, July 17
Labor activists this week joined a Clubhouse discussion hosted by IranWire to shed light on how this situation came about

A nationwide strike by workers in Iran’s oil, gas and petrochemical industries entered its fifth consecutive week on Saturday, July 17. Labor activists this week joined a Clubhouse discussion hosted by IranWire to shed light on how this situation came about and the workers’ demands, many of which relate to disparities in contracts under the Ministry of Oil.

Kaykhosravi, who was first to address the room, said he had reviewed various disputed contracts from some of the striking employees. Some of those on strike, he said, objected to how salaries were calculated for 2021-22 and the imposition of additional tax. 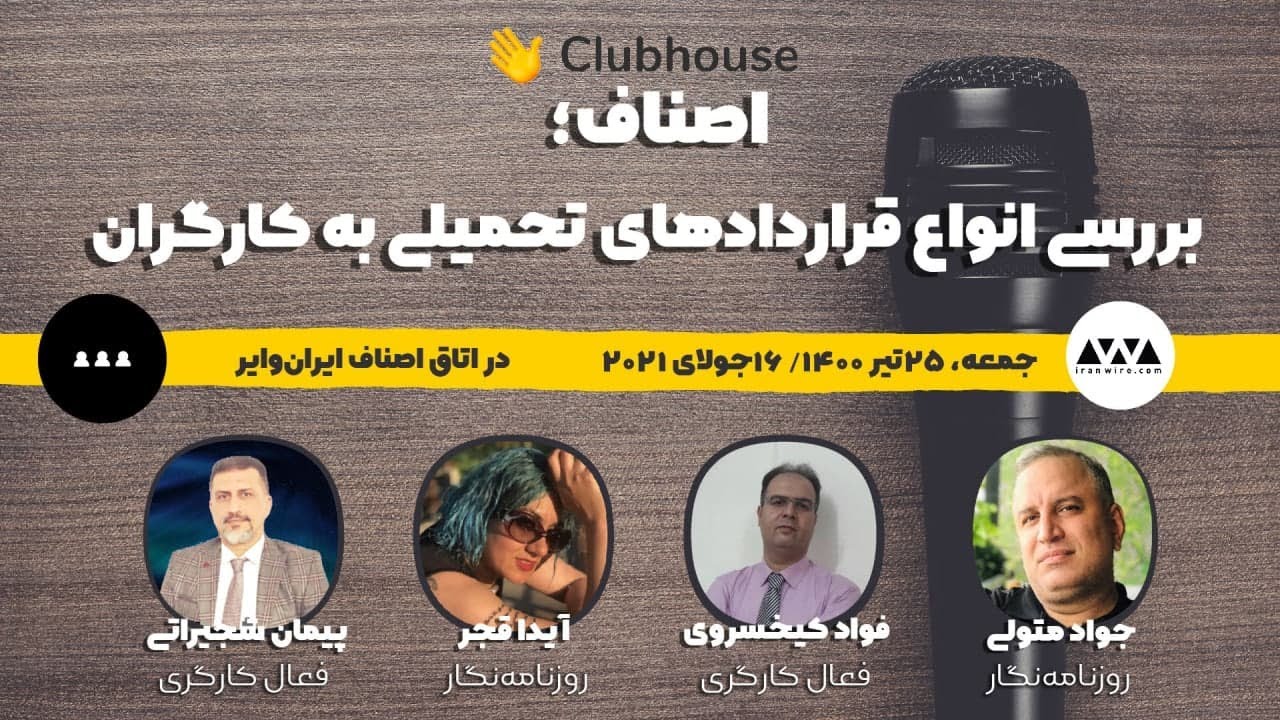 Temporary contract workers – who effectively work full-time for the Ministry but are only ever subcontracted out to private companies on a job-by-job basis – are thought to number about 106,000 in Iran and have also been on the vanguard of the strike action. These workers either want official recognition as Ministry of Oil employees or to be put on fixed-term contracts, and to be paid the same amount as the “permanent” workers: a little over 12 million tomans (US$521) a month.

Note 3 of Article 29 of Iran’s Sixth Development Plan for 2016 to 2021 called for a policy of “pay equalization” for oil workers, but this never happened. Salaries and bonuses were also due to have been reviewed by 2021, and “temporary” status eradicated for certain types of public sector workers in Iran. But many striking workers say they are still being subjected to the whims of so-called “third party” companies, while being paid vastly less than their peers and made to work in unsafe conditions.

The workers also want their work schedules to match those of their “official” colleagues: 14 days’ rest for every 14 days of work. Their other demands include the timely payment of wages, safeguards to prevent unfair or on-the-spot dismissal, state recognition of their right to protest and an end to what they have termed “slavery conditions” in Iran’s free economic zones, which are not subject to the same labor laws.

Free Zones: A Backyard for Looting

Tens of thousands of so-called third party workers are currently on strike. Unlike last summer’s industrial action, when only pipeline workers took part, this time all manner of employees, from electrician to construction workers to day laborers and administrative staff have downed tools, affecting an estimated 50 facilities across the country.

Peyman Shajirati said these workers’ lives and livelihoods were stymied by problems large and small because of the way the system was set up. “Most of the issues have their roots in these exploitative contracts and the labor law,” he said. “This has led to a high percentage being deprived of many of their rights, and left in an insecure situation in terms of job stability, with wages that are frankly scary. It is inconceivable how one could live on their wages. I know many workers whose children have no concept of a cinema, a swimming pool, library or travel.”

In 1994, he said, with the creation of the free trade zones, Iranian sub-contractors and the private sector were gifted the opportunity to employ workers on far worse conditions and lower wages than others, through “temporary” contracts lasting between 29 and 89 days. In these contracts, benefits enshrined elsewhere in Iranian law – such as an end-of-year bonus, insurance, overtime and housing – are non-existent.

"Naturally,” Shajirati said, “through this vehicle, apart from the profits that have poured into private firms – which are often owned by the military, or by influential individuals close to the government – the government itself is exempted from paying out unemployment insurance premiums to the unemployed workers. According to the existing ‘anti-labor law’, insurance is only paid out to workers who have at least six consecutive months of insurance payment history, and obviously those on temporary contracts will never manage this.”

In fact, he said, the supposedly private firms sometimes go further by asking employees to commit themselves to these brutal terms. “Workers in these areas are forced to sign ‘white contracts’ in which they make a commitment not to demand New Year bonuses and pensions. No copy of this contract is then given to them."

Workers in the special zones have reported working 12-hour days as standard, while living in dormitories that lack basic amenities, where the sanitary standards are often abysmal and the food inadequate. “The state of the health protocols is below zero,” Shajirati said. “This is a horrible and inhumane situation. It’s not an exaggeration: they look like forced labor camps.”

In the event of a dispute between workers and their temporary employers, the case is reviewed by a board comprising none other than a representative of the special zone and the company in question. "In the event of a dismissal,” Shajirati said, “the employer is only obliged to pay 15 days’ wages for each year of the person’s work experience. Meanwhile, companies in these areas enjoy a 15-year tax exemption and also benefit from state foreign currency facilities.” Free trade zones and special zones, he concluded, had become a “backyard for looting”.

In December 2017, the Secretariat of Iran’s Supreme Council of Free Trade-Industrial and Special Economic Zones proposed the government design a special economic zone for the Haft-Tappeh Sugarcane Agro-Industrial Company, the Khuzestan sugar refinery hit by repeated strikes since 2017 over a disastrous privatization attempt.

Shajirati told IranWire’s Clubhouse room that the 300-hectare project was approved by both the government and Omid Asadbeigi, the owner of Haft-Tappeh. Asadbeigi himself was then placed in charge of all related construction project, thereby reducing labor costs but also turning him into a gangmaster. Asadbeigi's financial partners are present at all levels of government in Iran, Shajirati said, and would be making a handsome profit.

"This is one of the reasons why Asadbegi has not been dealt with so far,” Shajirai added. “It’s possible he will be deprived of his official ownership of Haft-Tappeh, according to published news, but I doubt he will be dismissed outright. The Haft-Tappeh Free Trade Zone is green-lit by the government and Asadbeigi also has many partners in the state security agencies. From this angle, we can see why the government insists on establishing and expanding these zones.”

Iranian lawyer Moin Khazaeli told the group that collective bargaining would be key to the oil workers’ demands being met. But, he added, “this [concept] is not recognized in Iranian law. Workers in other countries have the power to go on strike without being fired, threatened, detained, convicted or prosecuted by the security and judicial apparatus. The government of Iran does not honor these rights, in spite of the fact that they are enshrined in international covenants.”

Curiously, he added, the application of labor law in Iran is overseen by the Expediency Council and not by parliament. The Guardian Council also does not recognize international labor law: a factor that has its roots in its understanding of what is meant by “labor”. According to Shiite jurisprudence, Khazaeli said, “the employer has something like a rental relation [to the employee] and can apply the laws to that individual at his own discretion."

In addition, Khazaeli pointed out, “In 1979, the Revolutionary Council issued a resolution according to which it was a criminal offence to go on strike, promote or plan strikes. In 1990, when the new labor law was approved, there was still no mention of the right to strike. Then in 2003, the Supreme Leader of the Islamic Republic was asked a a jurisprudential question about whether going on strike was permissible or not. He said: "Because the strike weakens the holy Islamic system, it is not permissible and it should not be done."

Associations and Labor Councils Beaten Down by the Workers' House

Parvin Mohammadi of the Free Union Of Iranian Workers said the Islamic Republic had pursued a policy of disenfranchising workers ever since the 1979 Islamic Revolution. The Workers’ House, once an umbrella body for Iranian trade unions, was turned by degrees against labor activists and, she said, had ended up destroying smaller movements from within.

"Workers' organizations and associations and councils formed after the revolution have been attacked by the members of the Workers' House in Tehran,” Mohammadi said. “They spread inside the factories, destroying all the workers' organizations. In the war years, there was no talk of workers being organized or having the means to bargain. The enactment of the new labor law saw these organizations defined as practically tools of the Ministry of Labor.”

Chapter six of the 1990 labor law sets out rules and conditions for would-be heads of unions. It includes the provision that they be defined as assistants to the employer. The so-called Islamic Labor Councils are also unofficially supervised by the Workers’ House and local representatives have no right to demand a meeting with employers or government institutions. “The individuals who are sent as labor representatives to investigation boards,” Mohammadi added, “are hand-picked by the Workers' House."

Tens of Thousands of Complaints Since 2013

International advisor Mehdi Kouhestani-Nejad told those present that Iranian workers have a number of grievances open with United Nations body the International Labor Organization (ILO). The fundamental sticking point for all of them, he said, was that "We have been confronted by a government, for 40 years, that cannot be categorized within the framework of any capitalist system.”

“Iran has had seven open cases with the ILO going back 1982. The teachers’ complaint, number 2566, is over issues of the right to organize and harassment of teachers. The Haft-Tappeh workers’ complaint was registered over the same issues under number 2887. The oldest complaint was filed in 1983, and relates to workers who were executed in the 1980s. The thickest file belongs to the Syndicate of Workers of Tehran and Suburbs Vahed Bus Company.”

In total, though, he added that between 2013 and 2018, the Statistical Center of Iran had recorded some 40,000 different industrial complaints made by Iranian workers. “Of the international complaints against Iran, 2,747 alone were registered over the expulsion of the ILO’s representative on the Islamic Republic of Iran. The situation in Iran is very sensitive, and the problems are deep-rooted.”

Thousands of Iranians on Strike in Weekend of Multi-Sector Protests

Iranian Laborers Greet the New Year at Risk and Underpaid

Oil Strikes in Iran: What are the Contract Workers' Demands?

Worker Commits Suicide in Oil Field Because of Unpaid Wages

The Workers' House: Supporter of Trade Unions or Tool of Suppression?