Unprecedented protests in Khuzestan over the province’s nightmarish water crisis entered their fifth night on July 18. Protesters gathered outside government buildings and marched in their hundreds through the streets in a number of major cities.

Angry demonstrators amassed outside the governor’s office in the provincial capital of Ahvaz, where the city center also witnessed bigger crowds than on previous nights so far. In Susangerd crowds did the same, chanting: “Shameless governor, resign! Resign!” 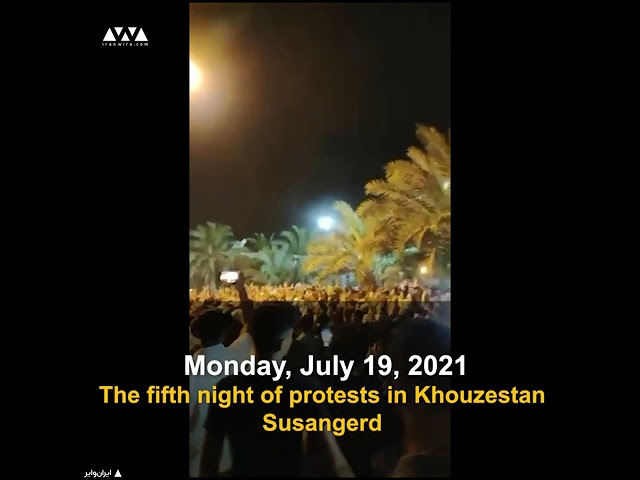 Up until now, the security forces of the Islamic Republic had been heavily concentrated in the cities of Susangerd and Shadegan. But clashes also broke out in Ahvaz on Monday night while videos posted online also showed officers firing directly at protesters in Mahshahr.

Women also took part in the marches in larger numbers on Monday night, even squaring up to special forces officers and chanting in their faces. In one video from the Alavi neighborhood of Ahvaz, a woman called on people to stand up against the suppression of protesters in Susangerd: “Let us all gather together," she said. "Let us go forward. Damn these tyrants!”

A number of political figures have thrown their weight behind the ongoing protests in Khuzestan. In a tweet directed at the security forces yesterday, Reza Pahlavi, the country’s last crown prince, said: “You have no right to shoot at peaceful and unarmed people who have taken to the streets. Your duty is to defend the innocent, thirsty people of your country against this anti-patriotic regime and its mercenary agents of suppression.”

Residents in the Alavi and Kut Abdollah neighborhoods of Ahvaz lit fires in the streets last night in a bid to block the officers off. They could be heard chanting in Arabic against the flawed water policies of the Islamic Republic, and in particular the diversion of water from Khuzestan’s rivers to the central regions of Iran. 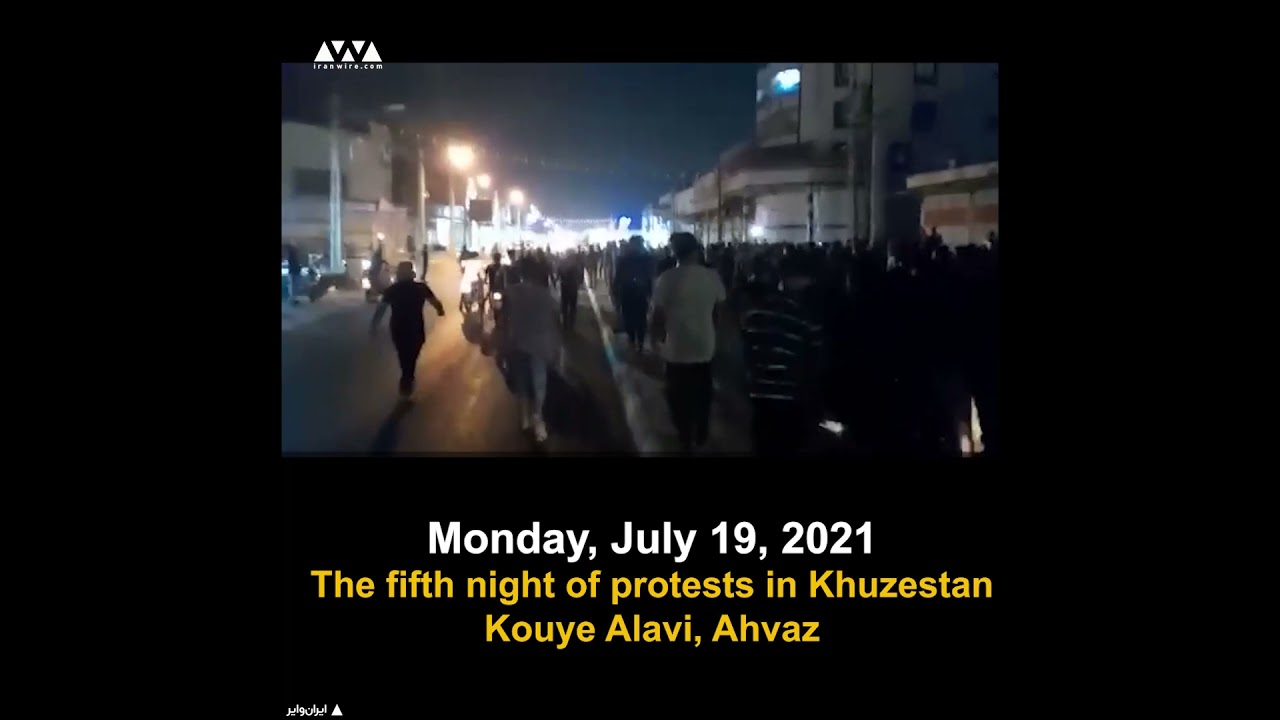 People in Alavi also reported that riot police had been shooting directly at them. At least three people have been killed by the security forces in Khuzestan since last Friday, according to provincial authorities.

Eyewitnesses report that many others have been injured, and in Alavi, demonstrators have responded by throwing stones. Dozens are also thought to have been arrested. As of now, 18 of them have been identified by name. Eight were arrested in various neighborhoods in Ahvaz, five in Khorramshahr and five in Shush. The whereabouts of all of them is currently unknown.

“The first night, police stood by and did not interfere in the protests,” a citizen of Ahvaz told IranWire. “The protests went ahead, but we knew that in the coming nights they would fight us with everything they had. Late into the night the news came that somebody in Shadegan has been killed.”

In the major port of Khorramshahr and in Jarahi township, a suburb of Mahshahr, police have also reportedly been shooting at protesters. A source on the ground told IranWire that anti-riot units have used “extreme force” in trying to suppress local unrest. Local sources in Shadegan also say anti-riot units and military sharpshooters have been stationed at the Laleh crossroads, near the city’s main marketplace. 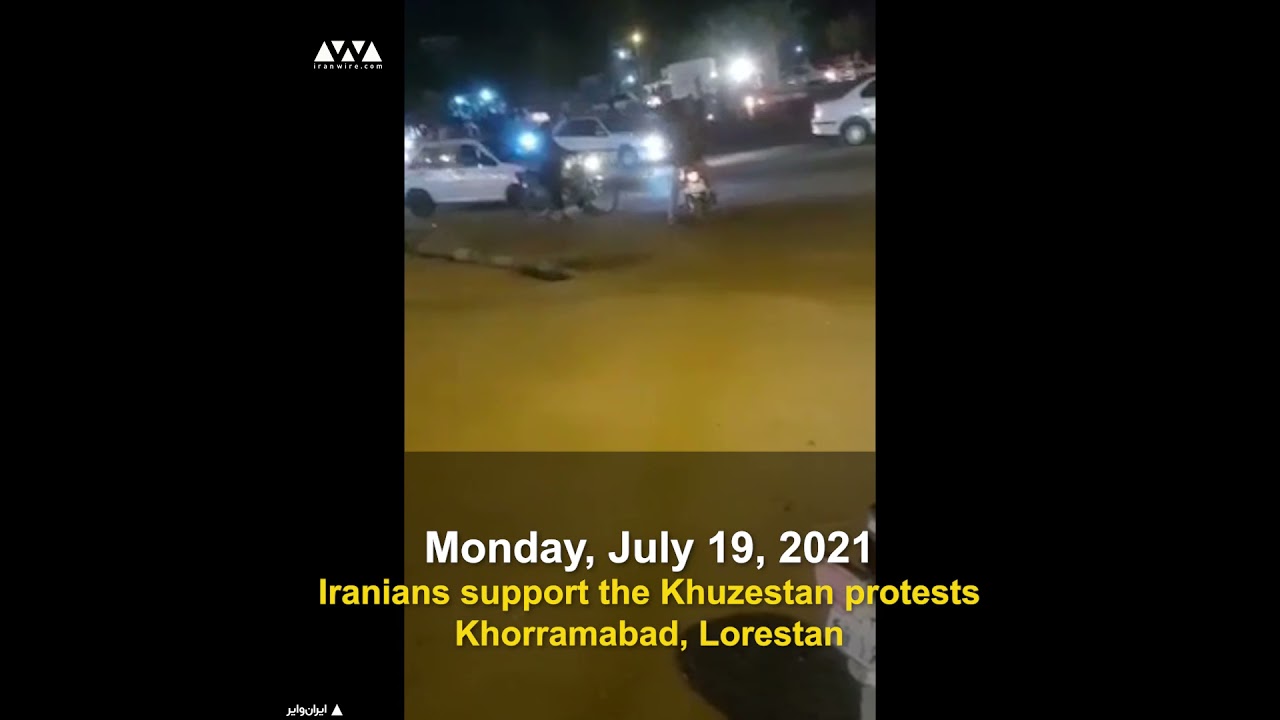 Citizens in some other provinces of Iran have now also taken to the streets in support of the demonstrations in Khuzestan. In one video published online, residents of Khorramabad, the capital of Lorestan, are seen attending a rally. “We must stand united,” the man recording the video says.

Monday’s unrest took place shortly after Khuzestan’s deputy governor for security affairs had told Islamic Republic of Iran News Agency (IRNA) that the protests had “finished”. In the same interview on Monday, though, the governor also threatened people posting footage of the demonstrations on social media, saying they could be arrested for “disturbing the public mind”.

Countless images and videos of the unrest in Khuzestan have been posted on social media in the past few days, but some of the most shocking have been those t posted at noontime on Monday, July 19: a plane on the tarmac of Ahvaz Airport that had flown in anti-riot units. Military commanders were lined up around the plane, looking on as their soldiers disembarked.

Some of those present were wearing masks to guard against coronavirus and the plane appeared to be a Boeing 747, which that the Iranian military usually uses to transport its forces. The images’ authenticity was confirmed some hours later by informed sources in Ahvaz.

“On Monday practically no normal flight landed at Ahvaz Airport,” one told IranWire. “This is the first time we’ve seen soldiers air-lifted to quell protests in Khuzestan. Before this they were always dispatched by land, usually from neighboring provinces like Ilam and Lorestan. But these ones were brought in aboard planes that the Iranian people have paid for.”

“The first night, the police stood by and did not interfere in the protests,” a citizen of Ahvaz who has participated in the protests since the first night told IranWire. “The protests went ahead but we knew that in the coming nights they would fight against us with everything at their disposal and we would stand against them with our lives in our hands. Late into the night the news came that somebody in Shadegan has been killed.”

Three people are so far known to have been killed by security forces during the Khuzestan protests. A man of 30 by the name of Mostafa Naimavi was shot dead on Friday night.

Omid Sabripour, the acting governor of Shadegan, confirmed Mostafa Na’imavi had been killed but blamed “rioters firing in the air” for his. He also claimed the culprits had been identified and arrested, but this was later denied by the semi-official Fars News Agency.

On evening of Saturday, July 17 an 18-year-old, Ghasem Khaziri, also died in hospital after having been shot the previous night. Access to the internet and even phone lines in most of Khuzestan was disrupted on Saturday night, allowing less information about the protests to reach the world outside. Saturday also saw the death of a third citizen of Khuzestan, named by HRANA news agency as Ali Mezraeh.

On Sunday, protests took place in at least 17 different cities in Khuzestan. Riot police and the Basij lobbed teargas at protesters and shot at them with live ammunition, with many demonstrators injured.