Maryam Dehkordi
6 min read
Iranian Christian convert Naser Navard Gol-Tapeh has been jailed for his faith since 2016
To mark his 60th birthday last Tuesday his mother released a tearful video in which she demanded to know what her son had done wrong
Christian converts in Iran have been targeted in fresh waves of arrests by the Iranian judiciary in recent months
Security forces have used religious differences within detainees' families to try to force them to "repent" and renounce their Christianity
Milad Goudarzi and 11 other Christians were arrested last December and their belongings seized, officially for belonging to a house church

Naser Navard Gol-Tapeh, a convert to Christianity living in Iran, has been in Evin Prison serving a 10-year sentence since December 2017 without a single day off. Arrested at an engagement party in 2016, the 60-year-old has since been denied medical care for a severe gum infection and in August 2020 came down with symptoms of Covid-19.

On Gol-Tapeh’s birthday on August 3, his distraught mother released a video in which she again called for his release, insisting her son had done nothing wrong. In fact all signs point to Naser being an early, blameless casualty of fresh crackdowns by the Iranian judicial system on religious minorities, especially those who have converted away from Islam.

It doesn’t matter whether the child is five years old or 50; for mothers and fathers the world over, worrying about one’s offspring every day is a given. But when that child has also been arbitrarily detained and abused for more than three years by an unstable, intolerant regime, on account of a faith they won’t renounce, that worry reaches fever pitch: no less than a secondary form of torture.

In a video shared with Article 18 on August 3, 2021, the elderly mother of Naser Navard Gol-Tapeh, a Christian convert jailed in Iran in summer 2016, bursts into tears as she talks about her son’s plight. “I love him very much," she says, before breaking off to sob aloud. “He calls me every day and asks about my wellbeing. He’s a good boy. God protect him.” 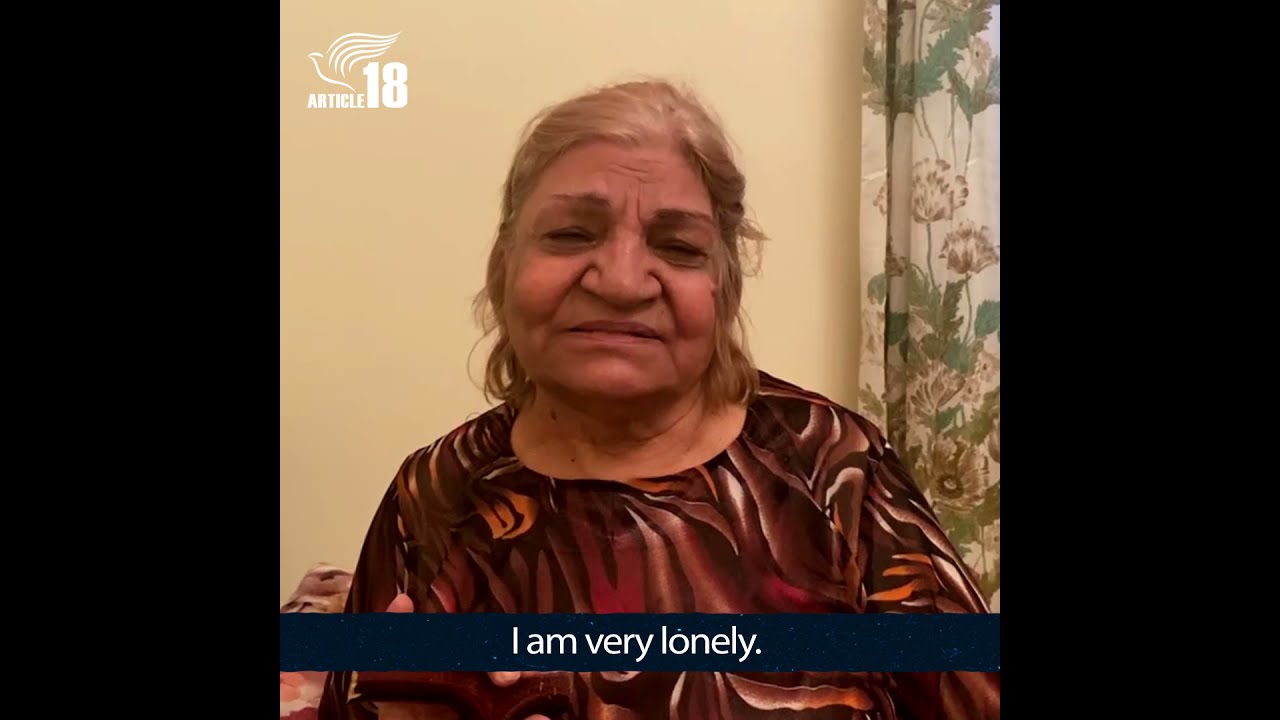 Naser was sentenced to 10 years in prison in May 2017, officially for having hosted a Christian church at his home. There was no other reason. In her anguished video, Naser’s mother goes on to say: “He has done nothing. All he did was become a Christian!”

She adds: “He’s already spent four years in prison. What was his crime? For God’s sake, please free him!... I am very lonely. Anyone who can do something for him, please do it. Free Naser.”

Naser Navard Gol-Tapeh lived in the planned city of Parand, in a deprived area on the outskirts of Tehran. According to Mansour Borji, director of advocacy for Article 18, although Naser has other siblings he was the primary carer for his elderly mother, supporting her at home day and night.

In July 2016, he was arrested when 30 intelligence agents descended on an engagement party at a house in the Andisheh township of Karaj, near Tehran. Everyone at the gathering was taken into custody. Most were later released, but Naser and three Azeri Christians visiting from Baku, named Alder Gorbanov, Yousef Farhadov and Bahram Nasibov, were taken to Evin Prison on charges of “illegal gathering” and “evangelism”.

The four were held in solitary confinement and interrogated for two months. Eventually they were released after posting a bail of 100 million tomans (about US$3,810) each. The Azeri citizens quickly left the country. But in May 2017, Naser was hauled back before Branch 26 of the Revolutionary Court in Tehran, presided over by Judge Mashallah Ahmadzadeh, and convicted of “acting against national security” through “the formation and establishment of an illegal church organization in his home”.

The court’s decision was allegedly based on a Ministry of Intelligence report, which was withheld from Naser’s lawyer along with the rest of the case file. He was sentenced to 10 years in prison while the three Azeri citizens were sentenced in absentia. All four had their appeal against the verdict thrown out by Judge Hassan Babaei in November 2017.

Naser was summoned to a badly-overcrowded ward of Evin Prison in January 2018 to begin serving his sentence. He has refused to renounce his faith behind bars. Last year he had a serious gum infection that went untreated, making him fear he would lose all his teeth, and in August he came down with Covid-19 symptoms, which under-resourced prison officials could only treat with painkillers. In that time, Tehran prosecutor’s office has turned down his request for a retrial four times and he has been denied so much as one day of furlough to see his mother, despite being eligible.

Article 18’s Mansour Borji told IranWire this case is part of a wider, illegal pattern of coercive behavior by the Iranian judiciary. “The intended recipients of Naser’s mother’s questions [in the video],” he said, “are those who, despite its prohibition under the Iranian Constitution, keep people like Naser in prison and exploit their family members to pressure them to give up their faith.”

Other Christian converts, he said, had recently also been arbitrarily jailed in a bid to force a kind of “repentance”. “Nasser and other prisoners of conscience are told that in exchange for denying their faith, they’ll be considered for release or a commuted sentence. If a prisoner refuses, like Naser did, they might lose the right to medical leave.”

He added: "The Iranian authorities have always claimed no-one is in prison in Iran because of their religious beliefs. But based on the testimonies we’ve received from prisoners, especially from Christian converts, we’re convinced it was only their beliefs that led to the application of these harsh sentences.

“Some testimonies explicitly mention pressure from interrogators to say that they regretted being, or were not, Christian. Where they didn’t agree to this, attempts were made to exploit their families’ intellectual and ideological differences – or else to accuse them of strange other offences. Mr. Gol-Tapeh, for instance, was arrested at a private party, but was charged with acting against national security.”

Since Naser Navard Gol-Tapeh was jailed, changes to Articles 499 and 500 of the Islamic Penal Code have allowed for increased pressure on certain types of political prisoner even after their release.

In May this year another Iranian Christian convert, Milad Goudarzi, was accused of "deviant propaganda and educational activities contrary to the holy law of Islam" after being arrested last December. A source familiar with the case told IranWire: "Milad was imprisoned along with 11 other Christian converts for believing in Christian doctrine and for peaceful ideological activities. He was released on a 250 million toman ($9,254) bail.” But in addition to this, they added, under the new law “he now has to report to the security police every week for six months."

The legal amendments were put forward by the Ministry of Justice. Article 500 now states that people who provide “financing or any other kind of material support” to banned groups, such as churches, is now punishable by imprisonment of two to five years. Convicts’ assets can also be seized by the Iranian judiciary.

"People like Milad and his peers are constantly in danger of having their property confiscated simply because they believe in Christianity, carry out peaceful religious activities or form house churches," the source added. “If this isn’t pressure to turn them away from their faith, then what is?"

Other Christian converts in Iran have seen their homes raided and personal property such as laptops, mobile phones and sacred objects confiscated without a clear reason. Even talking to other Christians online can provide officials with sufficient pretext to arrest them.

“The Islamic Republic seeks to build a homogenous society,” the source said. “The state won’t accept any divergent readings of faith or morality. The confiscation of property from people who worked for it, on false pretences and baseless accusations, seems to be the latest ‘solution’.

"Milad and the rest of his friends have done nothing wrong. But intelligence agents warned them that if they don’t sign a written commitment, they could face up to 10 years in jail or even be forced to leave Iran.”

US Government Publishes Overview of Iran's Crimes Against Religious Minorities

Six Christians among 54,000 released from prison

40 Years of Discrimination Against Christians, Jewish People and Zoroastrians