IranWire
3 min read
The first ever criminal trial for Iran's 1988 prison massacre opened in Stockholm District Court on Tuesday, August 10
Ex-prison official Hamid Nouri is accused of war crimes and murder for his alleged part in the atrocity
Victims' families, journalists and activists gathered outside the court building on Tuesday
Key witness Iraj Mesdaghi told reporters Nouri had been led into the courtroom by police

Dozens of people lined the streets in front of Stockholm District Court this morning as a first-of-its-kind trial of a former Iranian prison official got under way.

Hamid Nouri was arrested in Sweden in November 2019 after a private plaintiff accused him of having had a decisive role in the 1988 massacre of political prisoners in Iran. The former prosecutor’s assistant at Gohardasht Prison was indicted earlier this year on charges of murder and war crimes: offences serious enough that they can be prosecuted in a third country under the principle of international jurisdiction.

Family members of some of those killed travelled to Sweden this week for the opening of a court case expected to run until around next April, with around 70 witnesses due to be called by the prosecution. This is the first time a former agent of the regime has stood trial in connection with the slaughter. 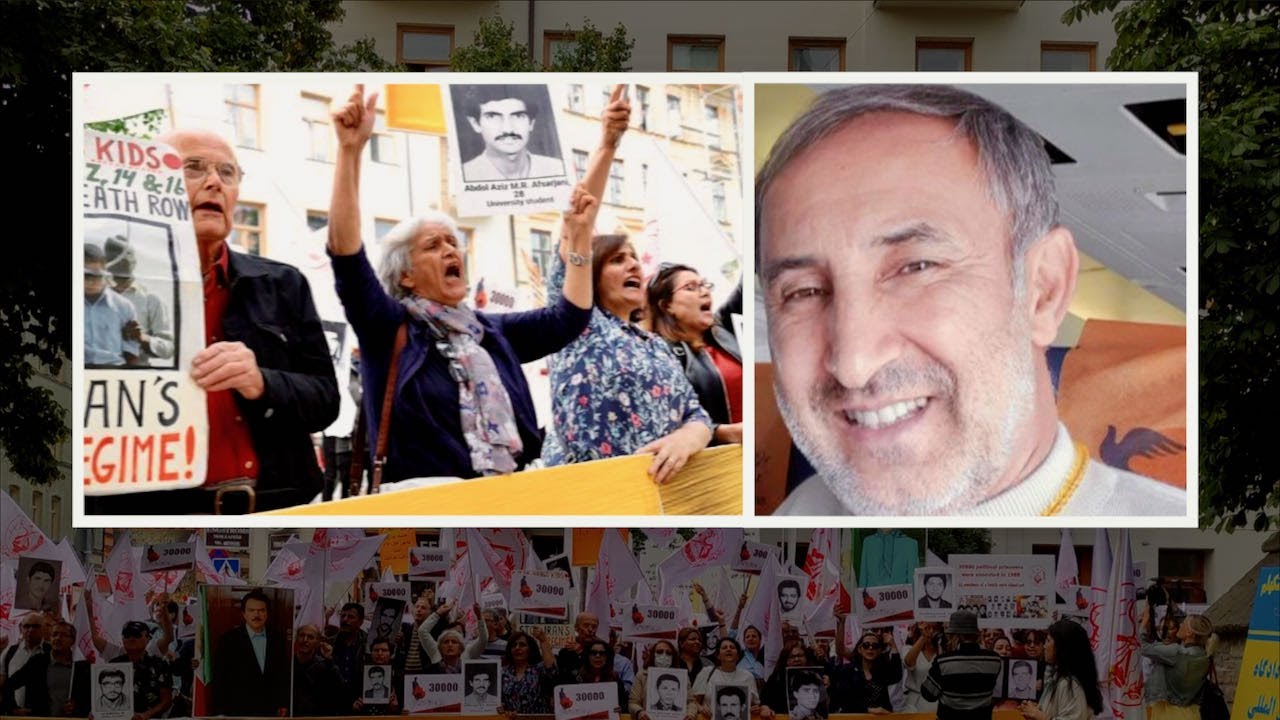 Iraj Mesdaghi, a human rights activist and one of the key witnesses in the case who helped to positively identify Nouri, said the 60-year-old defendant was led into court on Tuesday by several policemen with his hands cuffed.

Prosecutors read out the charges on Tuesday and in their opening statements, accused Nouri of “deliberately taking the lives of a large number of prisoners”, of placing inmates in the so-called “corridor of death”, reading their names and personal information out to staff, and lining up the condemned to be taken to systematic executions.

Despite Mesdaghi’s testimony, Nouri’s lawyers maintain the plaintiffs have got the wrong man. During the hearing on Monday the defendant never spoke, but threw the occasional angry glance at the courtroom and sometimes grinned.

Outside the courtroom a crowd of onlookers including journalists, activists and victims’ families and friends played music and held up pictures of some of those who were killed in 1988. Volunteers erected posters bearing the faces of dozens more victims on the fence opposite the court building.

Thousands of jailed members of the opposition Mojahedin-e Khalq (MEK) organization were sent to their deaths in the late summer of 1988, on the orders of Ayatollah Khomeini in the aftermath of the Iran-Iraq war. This “first wave” of killings was followed by a purge of leftist Iranian prisoners who were found not to be adherents to Islam.

So-called “death panels” were set up in prisons across the country to determine – based on interrogations lasting mere minutes – whether each detainee would live or die. The victims’ bodies were then driven away from the compounds in trucks and buried in mass graves.

Iranian authorities have never revealed the locations of the graves, which Amnesty International has said may constitute an ongoing crime against humanity as it amounts to enforced disappearance.

More than thirty years have passed since the 1988 massacre. But for countless Iranians it still constitutes an open, traumatic wound. Some of those in court on Tuesday also carried pictures of their parents, who died not knowing what happened to their children.

Hearings will take place for three days a week from now until well into 2022. A few participants have expressed hope that the Swedish trial could open the door to prosecutions of other Iranian officials for their part in the massacre – up to and including Iran’s new president, Ebrahim Raisi, who sat on the Tehran death panel.

'The Nation is a Plaintiff': Scores of Iranians to Testify in Case Against Hamid Nouri

A Move For Justice Around the World

Raisi's Crimes Against Humanity Will Haunt his Presidency

Ebrahim Raisi: The Case for the Prosecution

Fresh Calls for Mousavi to Face Criminal Investigation Over 1988 Massacre

A Move For Justice Around the World