Shia Militias in Iraq Change Uniforms to Avoid US Attacks

Members of the Iran-backed Kata’ib Hezbollah – otherwise known as the Hezbollah Brigades – in Iraq have replaced their uniforms with civilian clothes and stared dressing like Iraqi troops to avoid being targeted by US strikes, a source within the militia has confirmed.

The Shia militant group is also using civilian cars and has taken down its flags at key buildings.

Kata’ib Hezbollah members were photographed in the Husaiba market near the Al Qaim border crossing with Albukamal in Syria. The pictures show three members of the Brigades: two clad in the standard uniform, while a third is dressed as a member of the Iraqi Tribal Mobilization Forces.

The Tribal Mobilization Forces are part of the Iraqi army. They were formed in late 2014 by Sunni tribes fighting ISIS in the provinces of Anbar, Salah al-Din, Nineveh, Diyala and Kirkuk. The clothes they train in are plain green, and combat unforms are camouflaged in blue, light brown and dark brown, with the Iraqi flag topped by a dark green band on the right forearm.

Another photo shows a recruit at one of the Brigades’ bases near the Syrian border and the Khaled Al-Hijami military hospital, wearing the clothes of the Tribal Mobilization Forces.

In another image, two members of the Kata’ib Hezbollah are seen wearing the same military trousers and T-shirts as are worn by the Iraqi army. The internal source explained to IranWire that this is to camouflage their military presence in the border area.

Selling military clothes to civilians is strictly prohibited in Iraq. Shopowners in Baghdad confirmed to IranWire that those who violate this rule run the risk of being prosecuted for terrorism offences. Purchasers, they said, must display a military card, with the name and personal information of the holder. The card also bears a phosphorous stamp to prevent forgery.

A member of the militia stationed on the Syrian-Iraqi borders said his group is now using civilian cars to move around. He provided IranWire with images of one such vehicle belonging to the Brigades: a popular model owned by many locals.

Further video evidence shows a small convoy of military vehicles followed by civilian cars driven by the same group. In Iraq, it is also strictly forbidden for civilian vehicles to intermingle with military vehicles in case of booby-trapped cars. 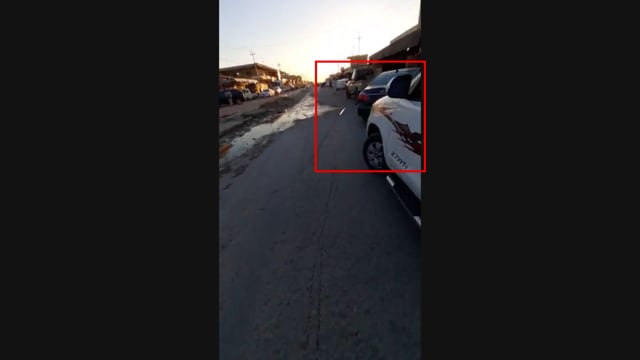 The Iran-affiliated paramilitary group has removed both flags and signs from its headquarters in Al-Anbar on the Syrian border. A photo obtained by IranWire shows a local office shorn of its official insignias, although a Toyota truck equipped with a 23mm machine gun is still visible parked nearby.

An uptick in attacks by US forces could be one of the reasons behind this new strategy. Over the past months, pro-Iran militias in the Syrian province of Deir Ezzor have been subjected to nearly 20 US and Israeli raids.

One of the most severe assaults was launched by the US on February 26, 2021. The raid, which targeted the border crossing, killed around 20 members of Kata’ib Hezbollah and seriously wounded ten others. Several armored vehicles were also destroyed in the attack.  "This evening's attacks show that President Biden is clear that he will act to protect Americans," the Pentagon said in a statement.

US President Joe Biden has also cautioned that Iran should regard his decision to authorize US airstrikes in Syria as a warning that it can expect consequences for supporting militia groups that threaten US interests.

‘Iran Has Told Shia Partners, ‘Iraq Is Our Backyard’

Killers of Iraqi Reporters and Activists Sentenced to Death in Basra

A Dispatch From Saqqez – Where Anger Runs Deep

King of Jordan: Tehran's Behavior in the Region Has to Change

What Happened to 'Exporting the Revolution' in Algeria?

A Dispatch From Saqqez – Where Anger Runs Deep

Abducting Children to Punish the Parents

Four Countries Give Tehran Deadline to Engage on Flight 752