In the past month, top-tier officials in the government of Bashar al-Assad have issued a series of statements effusively supporting the Iranian regime. The overtures to Tehran coincided with the second anniversary of the killing of the IRGC Quds Force commander Ghasem Soleimani in January 2020, which prompted an escalation of activities by Iran-backed militias against the US-led coalition forces in Syria. The pageantry came at the same time as an Iranian delegation led by the new Minister of Roads arrived in Damascus, reportedly signing an array of brand new bilateral agreements with Assad’s officials.

On January 6, the Iranian embassy in Damascus held a commemoration event with Ghasem Soleimani, coinciding with hundreds of mourning events and associated spectacles in Iran. Soleimani was killed along with Popular Mobilization Forces deputy chief Abu Mahdi al-Muhandis in a US drone strike on his car at Baghdad Airport on January 3, 2020, while the pair were returning from Damascus.

Syrian President Bashar al-Assad did not speak in person at the event. But in a speech delivered on his behalf by his political and media advisor Bouthaina Shaaban, he called for "expanding the Axis of Resistance, led by Iran, to include Syria, Lebanon, Iraq, Palestine and Yemen”. He also called for strengthened communication between the named countries. 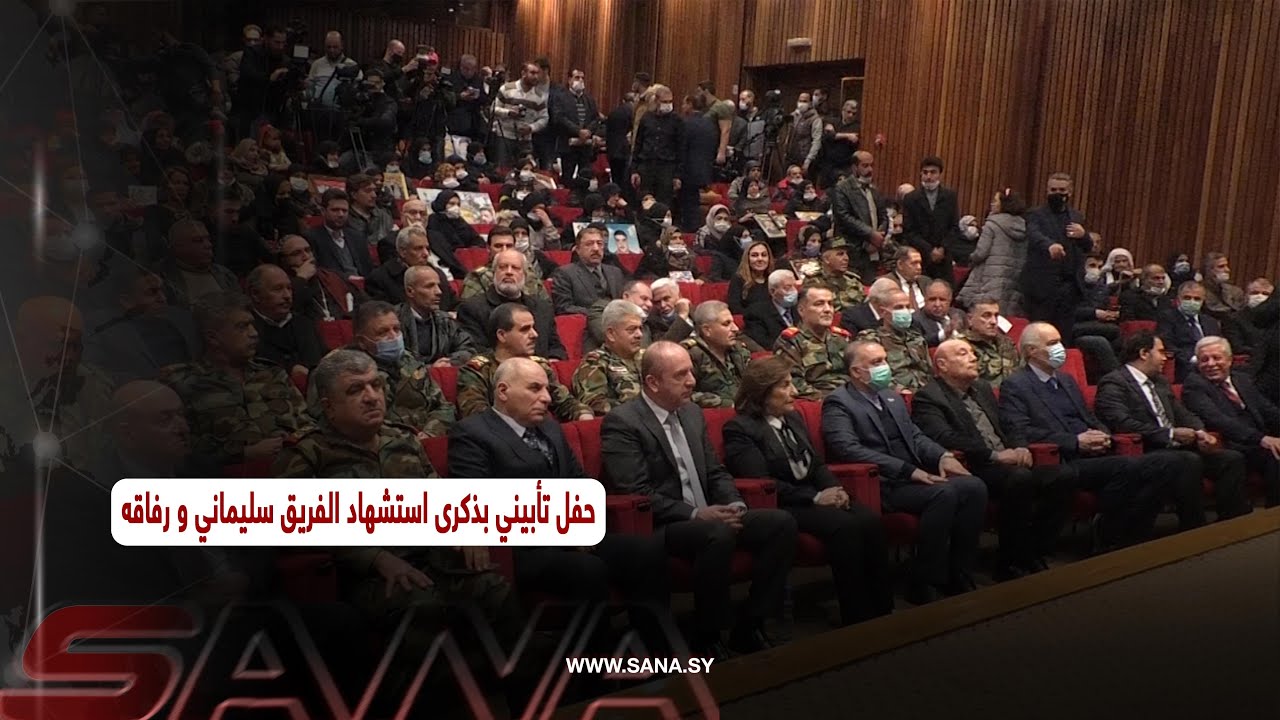 “Rail and electrical connections between Iran, Iraq, and Syria may constitute a good start to link the countries of the region with open relations,” Shaaban/Assad continued, adding that the goal of the Al-Tanf garrison, forces at a US military base stationed in an opposition-controlled zone on the Syria-Iraq border, was to “prevent” communication between Syria and Iraq.

Al-Assad’s speech also praised Ghasem Soleimani for his “asceticism, conscience, sacrifice and jihad for the sake of God, homelands and man”. He claimed “worked to establish the spirit of unity for the peoples of the Axis of Resistance” and as such, “posed a threat to the plans and presence of the United States and its Western allies, leading to the decision to assassinate him”. The memorial also included the screening of a laudatory documentary film about Soleimani’s life.

Several other areas under Syrian government control, including Sayyidah Zaynab in the Damascus countryside and Nubl in Aleppo, held ceremonies to honor Soleimani. Amongst others, they were attended by representatives of Hezbollah and militant groups loyal to the Islamic Republic.

On January 17, Al-Assad’s mouthpiece Shaaban gave an interview to Islamic Republic of Iran Broadcasting’s Ofogh TV channel. "Iran was the first country that helped Syria in its crisis, by sending advisors,” she said. "Syria’s relationship with Iran, Iraq and Lebanon is much more important than its relationship with Western countries... Iran has provided a lot of aid in the form of oil and medicine to the Syrian people, and the Syrian people will not forget that.”

Of the late commander of the Quds Force, Shaaban added: "The presence of the former Revolutionary Guards Quds Force commander, Ghasem Soleimani, was the greatest help to us of all. We needed him to confront the enemies and terrorists in the region who worked to destroy Syrian cultural heritage. Soleimani did the people a valuable service, with sincerity. We will not forget the sacrifices he made in Syria.”

In its official propaganda, the Assad regime usually conflates opposition fighters with ISIS and recognized terror groups. Without explicitly naming the subject, Shaaban concluded: "The terrorists did not expect people in Syria to fight them. But Syrians were able, with the help of Iran, Hezbollah, and Russia, to confront the takfiris [Muslims who condemn others for being ‘apostates’] and terrorists."

The day after Shaaban’s statements, on January 18, Luna Al-Shibl, a special advisor to Bashar al-Assad, told the Kremlin-owned RT Arabic channel that Iran’s presence in Syria was limited to “Iranian officers accompanying the Syrian army”.

Despite the welter of evidence to the contrary, Al-Shibl denied the existence of any other Iran-backed or Iranian military presence on the ground. But she went on to say that any “presence or absence” of foreign forces, “regardless of the type or nationality”, would have been the result of a sovereign decision by Damascus.

She then described the fledgling alliance between the Iranian and Syrian regimes as one rooted in a common history: “Iran has stood by our side, and we will not meet that with treachery, but with loyalty.”

The statements glorifying Tehran and Soleimani came at a crucial time for bilateral relations between the two dictatorial regimes. Recently Tehran has ramped up its economic and political, as well as military, activity in Syria with a series of brand new bilateral agreements.

At the start of 2022 Iranian Shia Muslims were allowed back into Syria for religious pilgrimages after a nearly two-year hiatus due to Covid-19. Along with crowds of the faithful came an Iranian delegation led by the Iranian Minister of Roads and Urban Development, Rostam Ghasemi. Their visit to Syrian counterparts in Damascus was extended to run for three days until January 14, during which, according to state media, they agreed on the following:

•          To launch a jointly-owned bank with local branches in Syria and Iran;

•          To form a “Joint Economic Committee” to oversee financial cooperation;

•          To establish a direct shipping line between Syria and Iran;

•          To look into the possibility of setting up joint free economic zones;

•          To look into shared enterprises in the development of public works, housing and reconstruction;

•          To work on a tripartite rail link for both passengers and goods between Iraq, Iran and Syria;

•          To discuss increasing Syria’s capacity to manufacture Iranian goods, such as tractors and agricultural equipment;

•          To coordinate against what was described as “the Western economic blockade”.

Rostam Ghasemi, who also chairs the Tehran-based Syrian-Iranian Joint Economic Committee, told Fars News Agency that the proposed new Iranian-Syrian joint bank would have branches in both countries. The Iranian delegation also met with the Governor of the Central Bank of Syria, Mohammad Issam Hazimeh, who reportedly expressed "the Central's readiness for technical cooperation to find mutual banking channels”.

At the end of 2020, an official at the Iranian Authority for Economic Transactions had claimed Tehran was trying to create a domestic version of SWIFT, the international messaging system used by banks, to facilitate the sharing of information on transactions between the Central Banks of Iran and Syria while both countries remain under sanctions.

Many Syrians Celebrate Assassination of a War Criminal

An Interactive Map of Iran's Presence in Syria

Travel Restricted Between Iran and Iraq After Lethal Protests in Baghdad

Day 29 of protests; Fire and blood from Ardabil to Evin

Is Iran’s Use of Ambulances to Arrest Protesters Legal?

Day 29 of protests; Fire and blood from Ardabil to Evin

Is Iran’s Use of Ambulances to Arrest Protesters Legal?

Scientific Report: Governance, not Climate Change, the Root Cause of Iran’s Water Bankruptcy