Aida Ghajar
4 min read
Composer, musician and singer Bijan Mortazavi has released a five-minute music video dedicated to refugees and asylum seekers the world over
The now 64-year-old left Iran shortly before the 1979 Islamic Revolution and never returned
Mortazavi's new track, Lalaie (Lullaby), written by Vandad Fallah, calls on refugees in peril to be unafraid
The video features real footage of migrants and asylum seekers, including children
“Only geographical boundaries separate us, demanding a visa in order to move just a few meters. It is the corrupt international system that separates people"

Bijan Mortazavi, an Iranian composer and singer-songwriter, has released a new music video entitled Lalaie, or Lullaby. First published by Radio Javan and later shared with IranWire, the track calls attention to the plight of refugees worldwide.

According to the latest UN statistics, there are more than 82 million displaced people in the world today. That figure has grown by more than two million since the Russian invasion of Ukraine on February 24 – the biggest single wave in Europe since World War II – and that number continues to climb.

Last year alone, more than 700,000 Afghans fled their country after the Taliban came to power, joining the 2.2m already abroad. The EU, Norway, Switzerland and the UK received asylum applications from more than 617,000 desperate individuals, from Belarusians to Eritreans, Syrians to Iranians, each in search of some kind of shelter, each with a story to tell. And images of terrified Ukrainian mothers and bewildered children crossing the border have haunted the airwaves in free countries for two weeks now.

Mortazavi’s new track aims to voice the feelings of these millions upon millions. The 64-year-old violinist and pianist left Iran for the United States on a student visa just before the 1979 Islamic Revolution, and never returned home. What motivated him to produce Lullaby, he told IranWire, was “to awaken the public to the plight of refugees”. 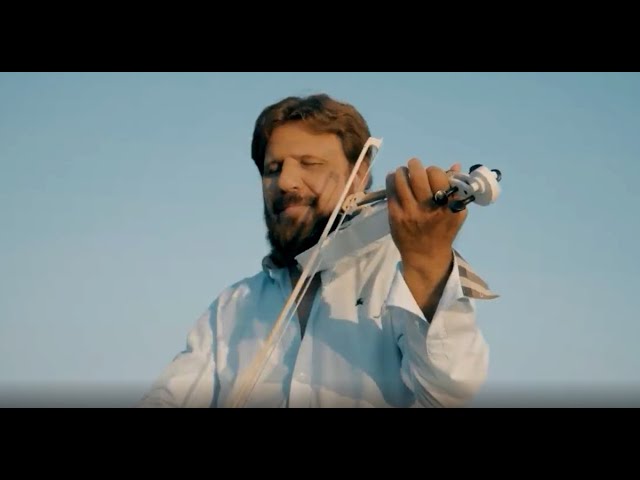 “Each and every day,” Mortazavi said, “I experience the pain of having been away from my motherland for 45 years. It makes no difference whether a refugee has left home because of war, tyranny, or poverty. They all leave behind their families, their past, and their roots in order to find a safe haven. I wanted to use art, beautiful poetry and music to draw attention to them.”

“To Be Human is to Open Our Arms”

Bijan Mortazavi’s five-minute video for Lullaby, arranged by Barbod Bayat and mixed by Parsa Ghavizad, features abundant, real footage of families escaping conflict zones around the world. It shows children in particular packed into dinghies and making the dangerous and traumatic sea crossing to Europe, waiting at asylum processing centers, and being aided by rescue workers. The lyrics, set against a violin and cello, evoke calm and rest: something that often eludes those making the crossing.

Since 2014, global commentators, media outlets and legislators have sought to differentiate between “real” and “fake” refugees, or between “refugees” and “migrants”; often with little regard to the very real human rights violations they face at home. “Some believe a refugee must be on the point of execution, or that only a war can justify becoming a refugee,” says Mortazavi. “But this is not so.

“Regrettably, our corrupt international system does not observe the logic of the human rights conventions signed by governments. Human rights laws are gathering dust. Enforced lifestyles, poverty, social and economic decay, cronyism, and everyday misery – all these can drive a human being who is not in hock to their system to flee, in order to live like a human being.”

The recent shuttering of borders, illegal push-backs and rise of the extreme right, especially in parts of Europe, are, to Mortazavi, an early sign of a global atrophy of humanity. “Every human being must open his arms to the other,” he says. “This is what humanity means.

“Only geographical boundaries separate us, demanding a visa in order to move just a few meters. It is the corrupt international system that separates people. When somebody wearing a suit garners more respect than somebody who struggles day and night for a piece of bread, it means humanity is on the retreat.”

According to the International Organization for Migration (IOM), since 2014 at least 47,353 people have gone missing on the asylum-seeking journey. Unfortunately, just like those that do make it, the number of these people keeps growing every day.

The following is IranWire’s translation of the Persian lyrics to Mortazavi’s Lalaie, written by Vandad Fallah:

Sleep, my love, let me worry about the terrors all around

Sleep, my life, I’m beside you

Don’t fear the night, for I’ll be awake for you all night

Gently close your eyes my darling

Throw the night out of the depths of your eyes

I’ve lain in wait for night my whole life

Sleep, so your sleep will set the night adrift

Sleep, my life, make my heart dance with your tossing and turning

Stun me with the poetry of your being

Sleep, my life, I’m beside you

Don’t fear the night, for I’ll be awake for you all night

Gently close your eyes, my darling

The Suspended Lives of Iranian Refugees in Bosnia

Asylum Seeker: ‘I Spent Everything I Had on Fleeing the Crimes of Khamenei’

Iranians Trapped in Bosnia: Going Back is Not an Option

What Chance a Prisoner Swap for Asadollah Asadi or Hamid Nouri?

Child Malnutrition on the Rise in Sistan and Baluchistan

All Football Matches in Iran Closed to Spectators

Ongoing Protests in Iran: What we Know So Far