Hannah Somerville
10 min read
Left: A banner at a protest in central London against the planned Rwanda deportation on Wednesday. Right: Brook House, where many of the affected asylum seekers are being held

Not one but two ex-officers who refused to shoot civilians during Iran's November 2019 protests are understood to be placed on a UK Home Office-planned deportation flight to Rwanda next week.

On Tuesday it emerged that an Iranian former police commander who testified to the Aban Tribunal about state-backed atrocities in Iran was on the list for the chartered flight on June 14. He has reportedly indicated he would rather die than get on the plane.

Including him, at least four Iranian asylum seekers are being held at Brook House Detention Center near London’s Gatwick Airport who have been given so-called “removal directions” for next Tuesday.

IranWire has learned that another of the Iranians on the list also claims to have disobeyed an order to use firearms on protesting crowds in November 2019. He was arrested as a result, and fled Iran while under investigation.

The four Iranians are being held at Brook House Detention Center, a removal facility outside London

Karen Doyle, co-founder and national organiser of UK immigrant rights group Movement for Justice, told IranWire she had spoken to the second man at Brook House with the help of an interpreter. “He said he was a soldier,” she said. “He was held for a period of time, then bailed.”

A third man is also understood to have fled Iran for political reasons. All of them arrived in the UK in mid-May in small boats across the English Channel and had barely a week to present their asylum cases before being told they would be sent to Rwanda.

If unchallenged, the British government wants to begin enacting a controversial deal with Rwanda to “offshore” refugees who arrive in the UK “illegally” to the central African country for processing.

According to Rwandan authorities, the first batch of refugees are being handed over to Kigali in exchange for up to £120 million ($157m) from London. If their asylum claims succeed, they will be able to “begin a new life” there; if not, they will be deported to their country of origin, which for many could be tantamount to a death sentence.

"I Expected Refuge in the UK"

The Iranian detainee identified yesterday is an ex-police major who formerly led a 60-strong police unit during nationwide anti-government protests in November 2019.

Last year, speaking via videolink from Turkey, he told the Aban Tribunal he had refused to allow those under his command to shoot at peaceful demonstrators in Iran, despite orders from the National Security Council to suppress them “by any means possible”.

His full testimony as it was received by the panel at Church House, London last year is reproduced below. For having ignored orders, the man identified as Witness 195 was arrested, held for weeks by the IRGC in solitary confinement, then sentenced to five years in prison.

He is believed to have escaped from Iran in late 2021 while his wife and children went into hiding. Due to “enormous pressure” from the authorities and the threat of potential kidnapping, he left Turkey in spring this year and made the dangerous crossing to the UK from France in mid-May.

Shadi Sadr, a lawyer, human rights advocate and executive director of the NGO Justice for Iran, which co-organized the Aban Tribunal, spoke to him on Tuesday. Having risked everything to testify last year, she told IranWire, he had told her: “I expected to have a little bit of refuge, peace and humane treatment when I arrived [in the UK].”

“He risked his life to get here,” she said. “The smugglers treated them very badly; they put them in a container and took them to some unknown places, then put dozens of them in a very small boat.

“He arrived in the UK on May 14 and it took the British authorities two weeks to send the removal direction. Considering that first he was taken to a detention center near Bradford, really, everything against him happened in a week.

"It’s impossible, completely impossible, to have a thorough review of a case of this kind in that time. He doesn’t have a right to appeal.”

The letter from the Home Office stating the former Witness 195 would be sent to Rwanda came on May 21. The UK government maintains Rwanda is a “safe third country” and offshoring asylum seekers there complies with its international legal obligations.

But, Sadr says, this ignores the reality. Rwanda is widely regarded today as a dictatorship with a dubious human rights record. “If he is returned to Iran [from Rwanda] it’s like sending him to his death. But the situation in Rwanda is not much better as a country that’s friendly to Iran.

“African countries in general are not safe for Iranian refugees. The Iranian state has a freer hand to do whatever it wants, to pay some money to a criminal or warlord to kill them. This is Iran we’re talking about. It has a long record of killing political dissidents outside the borders.”

Yesterday, Sadr said, in a state of acute stress at the prospect of being sent there, the ex-police officer had obliquely told her he would rather kill himself. “He said if this happens, he won’t arrive in Rwanda alive.

“I still can’t believe this is actually happening. It’s an unbelievable, shameless act against every single human rights principle I have ever studied and worked with, starting with the right to life.”

By late May, a little over a month after the Rwanda policy was announced, British NGOs were reporting having spoken to at least 100 asylum seekers who have received “removal directions” from the Home Office for June 14, including Sudanese, Iranian, Egyptian and Syrian nationals.

A group of 17 went on hunger strike last week at Brook House, which is run by a private company, Serco, on behalf of the government. In response, the Home Office threatened them with faster deportation.

Some of the detainees, though, were notified far later that most. Another Iranian at Brook House thought he was in the clear when he belatedly received his “removal directions” on Monday.

The man is understood to have fled Iran after being shot in a dispute by a brother-in-law wiht Iranian government connections. Of his treatment in England, Karen Doyle told IranWire: “It was just awful.

“He was kept in [notorious UK detention center] Yarl’s Wood, then sent to Brook House, where he was given an induction – in English – and told to sign up with a lawyer. On the same day – in English – he was given the notice. Because he only speaks Farsi and couldn’t speak to a lawyer without a Farsi translator, he didn’t respond within seven days.”

International law allows for refugees to be placed in a “safe third country” for their asylum cases to be heard. The UK has sought a new partner since leaving the European Union, where the Dublin Agreement regulated where they could be sent. Last month, it found that partner in Rwanda.

In Britain or Rwanda, Doyle said, would-be asylum seekers from Iran and elsewhere would have to “jump through hoops” to prove their cases. Iranian Christian converts, for instance, are expected to show evidence of “proselytizing” – despite the fact that they regularly face criminal prosecution in Iran solely for having converted.

Meanwhile members of the LGBT community are often required to prove they cannot safely live an “underground” life, and political dissidents must show they have made inflammatory statements that put them at risk if they return.

Ultimately, Doyle predicted, “No-one is going to stay in Rwanda. I don’t think they will even spend the money on deportation. I think they will give people some sort of temporary permit and rely on them just leaving.”

The mood at Brook House, she said, was “awful”: “These are guys who literally just arrived. They arrived with the belief and hope that Britain was a democracy that would treat them fairly."

"No Judge Will Allow This to Hold"

Kigali, Rwanda, where the detainees have been told they will have their asylum claims processed

The “Memorandum of Understanding” between the UK and Rwandan governments was announced on April 14. It was instantly denounced by human rights advocates as a “crime against humanity” and within 40 days was the subject of two legal challenges in the UK.

The first saw two pre-action letters sent to the government by the Public and Commercial Services Union (PCS), the NGO Care4Calais and Detention Action, stating the policy was unlawful. They are represented by Duncan Lewis Solicitors, one of the country’s biggest legal aid providers for refugees.

A spokeswoman for Duncan Lewis confirmed to IranWire on Wednesday that it was also representing some of the Iranians due on the June 14 flight.

PCS General Secretary Mark Serwotka said: “PCS believes that the government’s Rwanda plan is unlawful. In the past five years, we have lodged five judicial review applications against the government where they have breached the law. We are determined to hold them to account over this latest scheme.”

The other legal challenge was mounted by the charity Freedom from Torture, which is seeking a judicial review of the entire policy and has demanded assurances no asylum seeker will be sent to Rwanda before the process is complete.

Separately, a consortium of British lawyers including eminent QCs have been in touch with one another from the moment the policy was announced. Kaweh Beheshtizadeh, himself a former refugee from Iran turned award-winning immigration solicitor, told IranWire he had been party to those discussions and was “absolutely certain” that no flight to Rwanda would take off next Tuesday.

First, Beheshtizadeh said, people fleeing politically-motivated persecution in their home countries are protected under the 1951 Refugee Convention. They can take their individual case to the High Court or to an upper-tier tribunal, during which time they cannot be made to leave the UK.

But separately, he said, another application for judicial review was likely to be made by some of the affected refugees’ representatives by this Friday, or Monday at the very latest.

“I find it incredibly difficult to think that any judge protecting the constitution and rule of law would rule that this policy is lawful.”

Protesters outside the Rwandan Embassy in London on Wednesday

On Wednesday afternoon, a crowd formed in front of the Rwandan Embassy in central London to protest against the planned flight.

During the demonstration, activists were able to place a phone call to two detainees currently being held at Brook House, who have been told they will be sent to Rwanda on Tuesday. One, an Iraqi Kurd, said if it went ahead “my life will be in danger”

The other was a Syrian refugee. He said: “I didn’t have any choice but to flee from the war. I lost a member of my family. I want to stay here. I want to die here. I don’t want to go to Rwanda.” 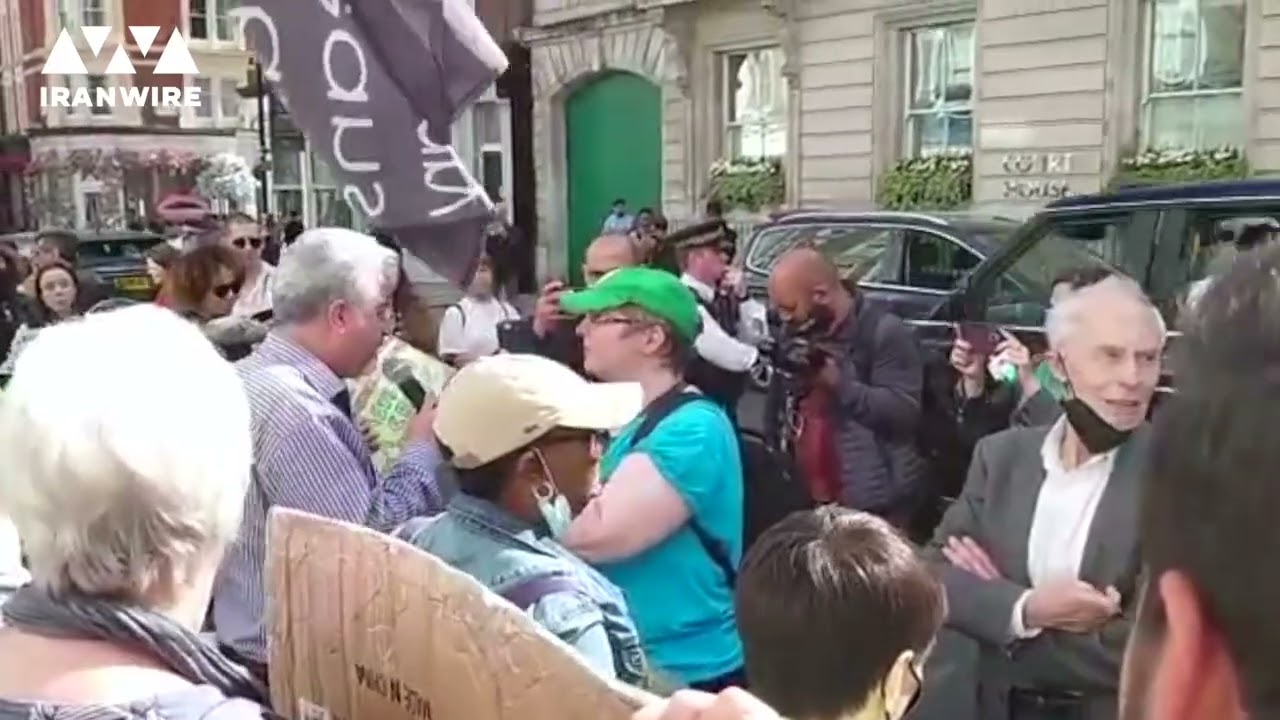 Letter from Calais: Iranian and Afghan Refugees are Too Angry to be Afraid

Letter from Calais: The Smugglers Will Always be a Step Ahead