IranWire
3 min read
Rae Goldfarb, 91, has a message for Iranian president Ebrahim Raisi after he cast doubt on the reality of the Holocaust this week
Rachel (Rae) Mutterperl Goldfarb with her mother Dina and brother Shlomo, in the 1930s. Shlomo was captured and killed by the Nazis in 1942

Rae Goldfarb, who was born to a Polish-Jewish family in what is today Belarus, told IranWire: “I would like to take him to my town, and have him open up the grave where 3,000 people were shot dead.” 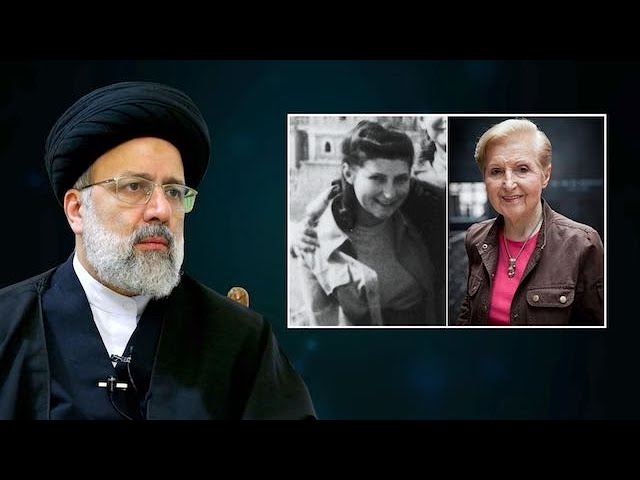 Ebrahim Raisi arrived in New York late on Monday to attend the UN General Assembly. In his first interview with a Western media outlet since his inauguration last year, he was asked by CBS News if he accepted that a massacre of 6 million Jews took place in World War II.

In response, the Iranian premier told presenter Leslie Stahl: “Look. Historical events should be investigated by researchers and historians. There are some signs that it happened. If so, they should allow it to be investigated and researched.”

State-sponsored antisemitism and Holocaust denial has been rampant in Iran since the 1979 Islamic Revolution. Today it is promoted in public announcements, the media and school textbooks. It reached new, toxic heights under Mahmoud Ahmadinejad in the mid-2000s.

Raisi’s comments during his first presidential visit to a democratic country – and ahead of a summit of world leaders – have sparked outrage and drawn condemnation from the White House and Yad Vashem in Israel.

For individual observers, too, the Iranian president’s response was dispiriting. “The sites where the atrocities happened have been preserved by governments, where they happened,” Goldfarb told IranWire. “They didn’t conceal them. Perhaps he’s not used to the fact that some governments acknowledge their atrocities.”

Jews in Dokszyce were made to wear yellow badges and confined to a ghetto near the synagogue, separated from the rest of the town by walls and barbed wire. The next year, the mass killings of Jews began.

One night just before before the final liquidation, the family fled and were sheltered by a farmer in a nearby village. But Goldfarb’s father and her younger brother Shlomo were betrayed to the Germans and killed. Rachel and her mother escaped to another ghetto in Glebokie, then seized the chance to join a group of Russian partisans in the forest.

In late 1944 the pair made their way to Lublin, Poland and later to Italy through the Alps. Finally in 1947, mother and daughter emigrated to the United States, where Rachel went on to marry Harvy Goldfarb, also a Holocaust survivor.

Today Goldfarb volunteers with the US Holocaust Memorial Museum in Washington, DC. “My memories as a child are sketchy,” she told IranWire. “It’s as if they were pictures, slides.

“I remember sitting in hiding, in a very crowded space, while people were dragged from our house and taken to their death. I remember living with the farmer. Neighbours told the Germans about Shlomo for 10 kilos of sugar. They bartered his life for that. I remember the women that sent my mother and I running because she knew I would be taken away next. All I can say is anybody who denies the Holocaust should have gone through something like that.”

Iran was a differently-run country during World War II. For a brief period in the immediate aftermath, the country played host to thousands of young Polish-Jewish refugees who came to be known as the “Tehran Children”. Many of them relocated to Israel after 1948.

Then and now, Goldfarb said, Iran was thought of by Jews as a “beautiful country”. In fact, “Iran was a place where Jews found a lot of help and freedom, going back to Biblical times. I can’t understand why it’s so belligerent now.”

If she had the chance to meet Raisi, she said, she would take him to her hometown where her whole family were buried, as well as to Auschwitz and the sites of documented atrocities in Europe.

She added that in accordance with both of their scriptures, the Torah and the Quran, as well as with the Bible: “I would also teach him compassion. All human beings have the same desire to love a life of freedom, a life of understanding of others and being understood the same way.

“The Bible says that if you forget something, you let your right hand wither. If you forget the Holocaust, I think your mind is withered. And those who have not learned from the past are going to be doomed into the future.”

Journalism is not a Crime

Blinding As A Weapon (5): Fearful Protester Shot In Eye Continues Fight For Justice

Blinding As A Weapon Of War (2): Soheil’s Story

Antisemitism and Holocaust Denial in Iran: A Review of State Narratives Since 1979

Iran's New President Has a Track Record of Antisemitism

Journalism is not a Crime

Blinding As A Weapon (5): Fearful Protester Shot In Eye Continues Fight For Justice

Called A “Whore” And “Infidel:” The Story Of An Iranian Christian Woman Abused In Custody