Aida Ghajar
2 min read
The death toll following the fire and riots in Iran's notorious Evin Prison on Saturday night has risen to 13, IranWire can report. At least four political prisoners are currently in hospital.

The death toll following the fire and riots in Iran's notorious Evin Prison on Saturday night has risen to 13, IranWire can report. At least four political prisoners are currently in hospital.

The judiciary's Mizan news agency said on Monday that four prisoners had died from their injuries on Sunday night, bringing the total number of deaths to eight. Mizan claimed that all those killed during the fire were in prison on charges of theft.

Sources told IranWire that four prisoners died in hospital and eight were shot dead inside the prison.

Meanwhile, Meysam Dehghanzadeh, Reza Qalandari, Sepher Imam Jumeh and Lughman Aminzadeh, political prisoners who were being held in Ward 8, are now being treated for their injuries in hospital. At least one of these prisoners is reportedly in a critical condition.

Thirty-two political prisoners from Ward 8 who were shot on Sunday night have been transferred to Rajai Shahr Prison after the situation calmed. Sources confirmed

to IranWire that these prisoners were severely beaten. Another group of prisoners has also been transferred to Fashafouye Prison. 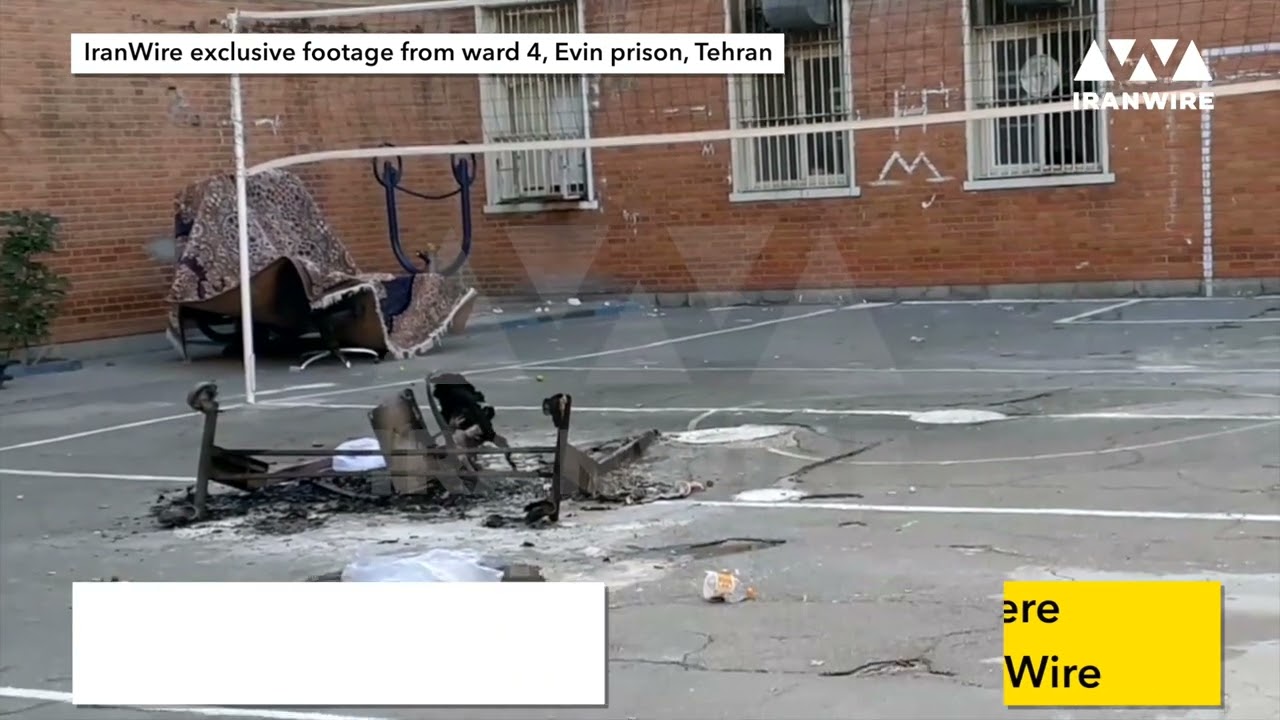 Iran state media broadcast footage from Evin Prison on Monday, claiming the situation was now under control. However, the footage only showed Ward 4 which was not the main area of the conflict.

According to exclusive videos obtained by IranWire, and contrary to the claims of the state media, the yard of Ward 4 was full of burnt items and tear gas canisters on the day after the shootings.

State-owned media described the fire as having started at the prison’s sewing workshop, a claim which was repeated by the head of the judiciary Gholamhossein Mohseni Ejei on Monday. Ejei blamed the incident on “agents of the enemy.” The government has consistently suggested the ongoing protests have been stirred up by the United States, Israel and other nations which it views as the enemy.

“What occurred in Evin Prison was a crime committed by a few agents of the enemy," Gholam Hossein Mohseni Ejei claimed.

“Undoubtedly, the perpetrators of the crime prepared the ground for the Zionist, American and British warmongering,” he added.

The fire at one of Tehran’s most heavily guarded facilities potentially raises the stakes for those continuing to rally against the government and the mandatory wearing of the hijab, following the death of Mahsa Amini last month.

Hundreds of people taking part in anti-government protests in recent weeks have been sent this detention facility.

Shopkeeper Photographed With Iranian President Apologizes To People of Kurdistan

Iranian Sunni Cleric Urges Tehran To Listen To Protesters, Says “We are all Iranians”

Iranian Teen Commits Suicide After Being Tortured In Prison And Released

Shopkeeper Photographed With Iranian President Apologizes To People of Kurdistan

Iranian Sunni Cleric Urges Tehran To Listen To Protesters, Says “We are all Iranians”