4 min read
“They fire directly at people, not just at protesters, but everyone,” a 14-year-old girl from Javanrood said in voice messages sent to IranWire.

Iranian security forces have fired indiscriminately at people during anti-government protests in a western Kurdish town, a teenager has said, amid reports that at least five were killed there earlier this week.

“They fire directly at people, not just at protesters, but everyone,” a 14-year-old girl from Javanrood said in voice messages sent to IranWire.

“We have a neighbor who has a little boy who is only six years old. This little kid came out of the house to throw away the garbage a few days ago and unfortunately the forces shot him in the leg with no reason. And they use snipers too. Also, they break the windows of people’s houses by shooting bullets,” she said. 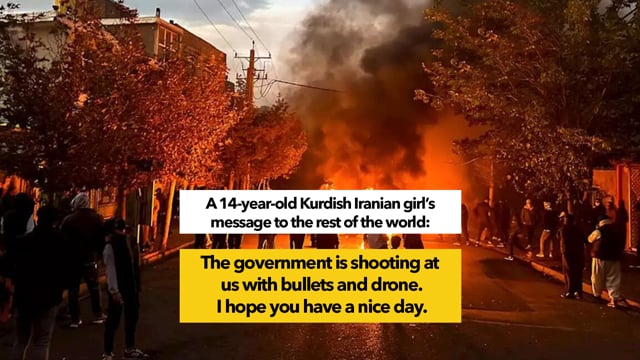 The teenager called for the imposition of a no-fly zone over the region “because the government is bringing drones and helicopters to shoot people in Kurdistan today.”

She also said that there was a lack of doctors, drugs and drinkable water in many areas of Kurdistan ahead of the winter. But she added that “some people bring spring water from the mountain with a tanker and people buy it.”

This girl’s testimony comes amid reports that security forces used heavy gunfire against protesters in Javanrood on November 21, killing at least five.

Activists said the demonstration erupted at the funeral of two people killed the previous day.

Videos circulating on social media shows people taking shelter in alleyways as heavy gunfire echoes through the streets. Individuals could be seen lying motionless and bloodied in the streets.

The semiofficial Fars news agency reported that security forces were fired upon with live ammunition.

Iran has been gripped by protests since the September death of a 22-year-old Kurdish woman in the custody of Tehran’s morality police. The unrest triggered a heavy-handed crackdown by security forces in which more than 378 people were killed, including dozens of children, according to one human rights group. Thousands of people have also been arrested. Five people have so far been sentenced to death over the protests.

3 min read
Continue to next article