Golrokh Ebrahimi: Six Years in Prison for an Unpublished Story 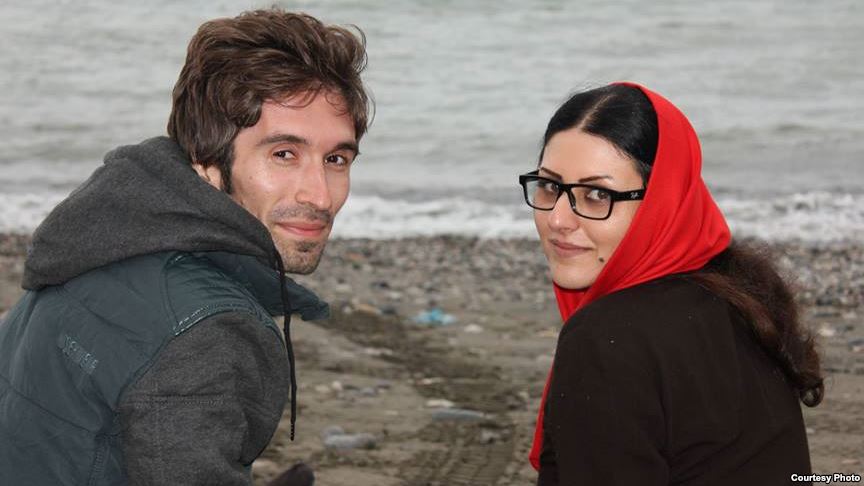 On Tuesday, October 4, writer and human rights activist Golrokh Ebrahimi received a strange phone call ordering her to present herself at Evin Prison by noon on Wednesday evening to start serving her prison sentence. By law, authorities much convey such an order by way of a written summons. But that was not the only unusual thing about the call.

“The arresting officer used the phone of Navid Kamran, a codefendant of mine,” Ebrahimi told IranWire hours before presenting herself at Evin. “They had gone to his shop to arrest him and used his phone. When I answered the call, the man who introduced himself as an agent of the Centre for the Implementation of Sentences said that I must present myself to serve the sentence. I said that I had received no official summons or a call from Evin Court. ‘You are using my friend’s phone to call me and it might be a joke,’ I said. ‘I don’t know you and I have no idea who is talking to me.’ He answered back that ‘you might think this is a joke but we are here to arrest your friend and you must present yourself at Evin’s court right away.’ I said that I could not get there by the end of business hours but perhaps I could do it the next day. He said that I would be arrested if I did not present myself by the next day.”

Ebrahimi’s ordeal began when the Revolutionary Guards arrested her along with her husband, Arash Sadeghi, at his workplace in Tehran on September 6, 2014. The Guards had no arrest warrant, but took the couple to their home, ransacked the place, and confiscated their computers, CDs, and notes. Among the confiscated items was a story about the punishment, under Islamic law, of death by stoning. According to a report from Amnesty International, “The story describes the emotional reaction of a young woman who watches the film, The Stoning of Soraya M, which tells the true story of a young woman stoned to death for adultery — and becomes so enraged that she burns a copy of the Quran.”

On August 22, 2015, Branch 15 of the Revolutionary Court sentenced Ebrahimi to seven years in prison. Sadeghi was also sentenced to 15 years, and two of their friends, Naveed Kamran and Behnam Mosivand, also received lesser sentences. Charges against them included “insulting Islam,” “conspiracy against national security,” and “propaganda against the regime.” Judge Abolghasem Salavati, who the European Union and human rights organizations have accused of gross misconduct regarding the human rights of the defendants, presided over the case.

“The charges against Golrokh Ebrahimi are ludicrous,” says Philip Luther of Amnesty International. “She is facing years behind bars simply for writing a story, and one which was not even published.  She is effectively being punished for using her imagination. Instead of imprisoning a young woman for peacefully exercising her human rights by expressing her opposition to stoning, the Iranian authorities should focus on abolishing this punishment, which amounts to torture.”

Arash Sadeghi, a student activist, had been arrested and imprisoned five times since 2009 and was beaten and mistreated during his incarceration. He was arrested again on June 7, 2016, to serve 19 years in prison because four years of his previous sentence had remained when he was “conditionally” released.

Sadeghi is now an inmate in Evin Prison and in my conversation with Golrokh Ebrahimi I asked her about her husband.

What do you know about your husband’s the situation in prison?

Arash is currently held in Evin’s Ward 8 along with common criminals, which is illegal. The law requires that the [political prisoners] be separated. Recently, there have been many worrisome reports coming out of Evin’s Ward 7 and Ward 8. Political prisoners in these wards are not safe. Diseases are rampant in Ward 8. Evin’s clinic has announced that many inmates in these wards are suffering from diseases such as AIDS and hepatitis and that the sick inmates have not been quarantined. Political prisoners are not in one place but occupy various rooms.

Arash began his sentence under very strange circumstances. Could you please describe them?

In June, when our two codefendants received their summonses, Arash went to the Evin Court to find out how much time we have so we could put our personal affairs in order before going to prison. He thought that by going there, he could ask for more time. Not only did they not give him more time, they arrested him right then and there without any forewarning.

Is there any legal way to shorten your husband’s 19-year prison sentence?

Yes, there is, but it has not been applied to him. Mr. Nassirpour, Evin’s official in charge of carrying out sentences, put a paper in front of Arash that said that he would be freed in 2035. This shows that even Article 134 has not been applied to Arash although legally he was entitled to it. [This article of the Islamic Penal Code allows a prisoner to serve sentences concurrently if certain conditions are met.]

What was the evidence supporting the charges against you?

I was accused of “insulting the sacred” based on the hand-written stories and poems that they found in my home. They were never published anywhere. The night that we were arrested, they searched the house and seized my writings. Afterward, based on these writings and a Facebook posting in support of Shahin Najafi [the Iranian musician whose songs are considered “blasphemous,” and who now lives in Germany] they gave me five years in prison. I got another year for "propaganda against the regime" for my Facebook posts and for my relations with the families of political prisoners and those executed.

Do you believe these charges to be legally valid?

They are not valid either legally or logically. On the day of my appeals court, my lawyer, Mr. Amir Raeesian, referred to a quotation from [Supreme Leader Ayatollah] Khamenei on his website that said, “What happens in the private life of an individual cannot be used as evidence for a prosecution, even if it includes insulting the sacred.” Of course, they disregarded this defense.

What was the verdict against you in the lower court?

Unfortunately, I could not be present in court. I had had a difficult surgery and was not feeling well. I sent the court all the relevant medical documents, telling them that I was hospitalized. But Judge Salavati did not pay any attention to them and sentenced me in absentia to six years in prison. The court of appeals upheld the verdict exactly as it was.

What about your codefendants?

If you read our indictment line by line, it becomes clear that Arash and I have been framed up. For example, they told Arash that he was running a “group.” They named individuals whom we had never met even once, with whom we had no relations and whose beliefs we did not share. They offered no evidence for this whatsoever, not even a text message because this “group” did not exist. It was a total fabrication.

You and Arash were married quite recently. How long was it before you were arrested?

We were married in February 2014, and were arrested in September. We had been married for only six or seven months. I spent 20 days in solitary confinement in the Revolutionary Guards’ Ward 2A, but Arash was kept in solitary confinement in the same ward for seven months. He was transferred to Ward 8 only in his last week. After that, he was released on bail.

He went through a very difficult period, which was both illegal and unjust. Arash was not allowed a lawyer at his trial. During the first two sessions of the lower court, he did not even have a court-appointed lawyer and was forced to defend himself. We were pressured to discharge our lawyer, Mr. Peyman Attar. The next lawyer was Mr. Raeesian. They also pressured us over him, but this time, we resisted the pressure. They explicitly wanted us to hire a lawyer that they approved of. That is why they did not allow Mr. Raeesian into the trial, and Arash was forced to defend himself.

Arash was thrown out of university. It was to arrest him that that night four agents broke the glass to open the door by turning the inside lock and entered the house. That night his mother died from shock and his family was destroyed. Then for a year and a half they subjected him to long interrogations and horrible solitary confinement.

He is a political activist. He is not a murderer, and he does not deserve to spend 19 years in prison just for sympathizing with political prisoners.

This article was originally published in October 2016.

You in IranWire
Continue to next article