Being a Mother Behind Bars in Iran: One Woman's Story

“She pleaded with the court examiner and the assistant prosecutor to let her be with her daughter on the first day of school, so she wouldn’t feel humiliated in front of her classmates. They didn’t allow it.”

The disappointed mother in this case is Maryam Akbari Monfared, a political prisoner held at Tehran’s Evin Prison since 2009 – and recently at Semnan – without so much as one day’s furlough. Her only “crime” was that some members of her immediate family supported the People’s Mojahedin Organization (MEK). On December 13, 2021, her husband and daughters celebrated her birthday in her absence for the 12th year running. 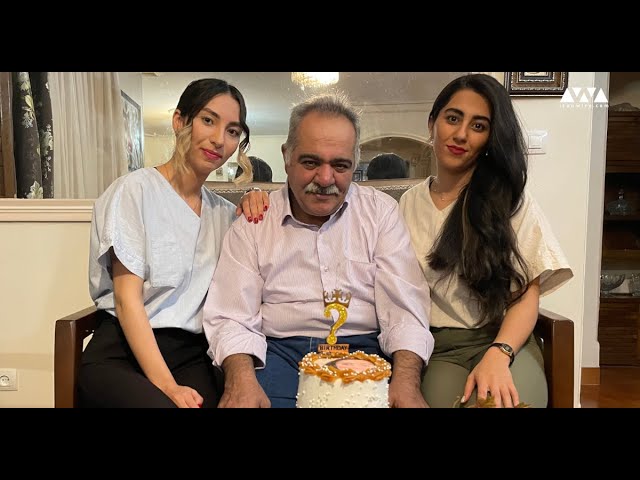 Jila Baniyaghoob, an Iranian journalist and a women's rights activist, told IranWire that Maryam Akbari Monfared’s imprisonment has been legally invalid since 2013, when the Islamic Penal Code was amended to give a different explanation of the “crime” she was convicted of. The lawyer Mohammad Hossein Aghasi has argued both the judge and administrators could and should have allowed her to see her daughters more often. And Hamed Farmand, a children’s rights activist, points out that the children of this political detainee have suffered unjustly as well.

Three of Maryam Akbari Monfared’s brothers, and one of her sisters, were murdered in Iran’s 1988 prison massacre for being members of the MEK. She herself was never found to have any direct connection with the organization. According to Monfared’s husband, even the sentencing judge at Branch 15 of the Revolutionary Court told her: “You are paying for your sister and your brothers.”

Monfared was arrested in December 2009 after calling a member of her family in Iraq. She was held in solitary confinement for 43 days, interrogated without access to a lawyer and in May 2010, was sentenced to 15 years in prison for “war against God” after a trial that lasted less than an hour. Since being jailed, she has issued public calls from inside prison to both the Iranian judiciary and the United Nations to investigate the “illegal killing” of her siblings.

Cooking and Sharing Meals in Prison

Jila Baniyaghoob, who was also Monfared’s cellmate in Evin Prison for a time, explained to IranWire: “They associated Maryam with the MEK just because she had talked on the phone to other members of the family. She was a homemaker, not a political activist. She should have been released after the law amendment in 2013; now, she’s the longest-serving political prisoner in Iran to have not been granted a single day’s furlough.

“Maryam has three daughters. When she went to prison her youngest, Sara, was only three and a half years old. While I was in Evin, each week they were giving her just 20 to 30 minutes to see her children; many of these meetings were behind a cubicle window. Beforehand she’d try to cook for her daughters using the limited kitchen facilities on the women’s ward. She never forgot what it meant to share a meal with them. And she put so much love into it.”

In Baniyaghoob’s view, 20 to 30 minutes a week was nowhere near enough time for the family to reconnect. “Sometimes the children quarreled with one another over who would get to speak to her,” she said. “When Sara turned six and was just starting school, she pleaded with the court examiner and the assistant prosecutor to let her be with her daughter on the first day of school, so she wouldn’t feel humiliated in front of her classmates. They didn’t allow it.

“They are punishing her for a plea she sent from Evin Prison in 2016, asking for those who were responsible for the murder of her siblings to be put on trial. Maryam asked why, if her four siblings had already been tried and were already serving their sentences —one of the brothers had even finished his sentence – they were then executed? She also wanted to know where her sister and brothers were buried.”

Monfared’s children have suffered a great deal during her incarceration, Baniyaghoob said.  “Sara was nine when she had to undergo surgery in hospital. Maryam asked the judge and the court’s examiner to let her go to the hospital and be with her daughter before she was taken to the operating room. But they rejected this request too. Eventually, on her husband’s insistence, they let her go to the hospital for two hours, accompanied by four guards. Imagine what her daughter must have gone through seeing the guards surrounding her mother like that.

“The girls have been growing up for 12 years without their mother. Maryam told me she was distressed by not knowing what her daughters’ interests were: what colors, what types of fruit and what kinds of dresses they liked, for instance.”

Last year Monfared was transferred to Semnan Prison with no reason given. Baniyaghoob believes this was agreed by security officials in a bid to make her suffer more: “Haven’t all these years in prison been enough not to send her to the horrifying Semnan? Before this happened, at least her children could see their mother once a week. But the distance and coronavirus restrictions have meant that now, that weekly meeting has turned into once every few months. The women’s ward of Semnan Prison is in a very poor condition in terms of hygiene, food and living space. Since Maryam is a resident of Tehran, this transfer is completely illegal. It was meant to harass and punish her all the more.”

They Changed the Law but Kept the Old Verdict

The Islamic Penal Code was amended in 2013. Article 279 of the revised version states: “Moharebeh [war against God] is defined as drawing a weapon against people’s lives, property or chastity, or to cause terror, as it creates an atmosphere of insecurity.” This changed legal definition meant the basis of Maryam Akbari Monfared conviction no longer appeared to be valid. Since then her lawyer and husband have taken her case to the Supreme Court three times, but have yet to receive any response.

“Leaves of absence and the commuting of sentences are legal privileges bestowed on a prisoner after the judicial bailiff and prison head confirm their good behavior,” Mohammad Hossein Aghasi, a human rights lawyer who has defended many political prisoners, told IranWire. “I have no idea why this has not been applied to Ms. Akbari Monfared. Her sentence should have been commuted after 12 years, and after she posted an enormous collateral sum. In addition, given that she is a mother, the judge could have allowed her to meet her daughters more often, and more conveniently. They could have changed the sentence to house arrest, or commuted the sentence while requiring her to wear an electronic tag. It seems they have no intention of being helpful in this case.”

Aghasi also criticized the Iranian judiciary’s failure to follow international best practice with regard to Monfared’s family, such as the UN Convention on the Rights of the Child: “When you sign these international conventions you must observe their provisions and reform domestic laws accordingly. Unfortunately, unlike the civilized laws of European countries, Iran’s law lacks any provision for lightening the sentences of incarcerated mothers. They are treated like any other prisoner. As much as possible, we should be preventing blameless children’s lives from being ruined.”

It is not known how many political prisoners in Iran are parents. This makes it harder to call for reform. Hamed Farmand, a children’s rights activist and founder of the International Organization of Prisoners’ Children (COIPI), told IranWire: “It is the right of all children to enjoy their childhood, to be in constant contact with their parents, and to bask in their affection. When the authorities imprison a parent, they must take the consequences for their children into account.

“A mother like Maryam Akbari Monfared, who poses no danger to society and who, according to many activists, is innocent, should not be spending 12 years in prison without a single day of furlough. What are her daughters guilty of?

“Since 2011, after Europe’s penal codes were amended, European countries have imprisoned mothers with small children for lighter crimes. Instead, they are sentenced to unpaid community service.

“How many children in Iran have been deprived of life with their mothers in recent years? Maryam Akbari Monfared, [human rights activist] Narges Mohammadi or [human rights lawyer] Nasrin Sotoudeh are all mothers, whose only crime was activity in defense of civil rights, and criticising injustice. They were all punished by long prison sentences. In many cases imprisoned mothers have even had their phone access cut off, losing their last line of communication with their children. Because of such actions, children suffer from insomnia, stress and psychological disorders, and in some cases have dropped out of school. The Iranian judiciary has effectively turned into a system that reproduces violence.”

Jila Baniyaghoob had a lump in her throat as she summed up the impact of Monfared’s incarceration on her family: “When Sara was studying in first grade, she was so happy to be learning how to read books. She would bring her first-grade Persian textbook to the meeting hall in prison. ’I want to read from the textbook to my mom,’ she would say. This in a meeting that would only last 20 to 30 minutes.”

Crime: Being a Mother

Imprisoned Mother-of-Three: I’m Proud to Have Fought Against Poverty and Discrimination

Saving the Children of Prisoners from Victimhood

The Misfortune of Prison Children

Hossein and Golroo: the Father and Baby who Disappeared

Cover Up? What Do We Know About Evin Prison Fire

Cover Up? What Do We Know About Evin Prison Fire