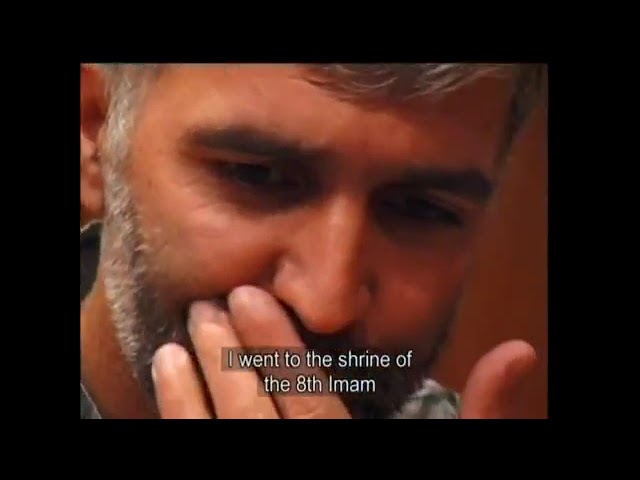 A true-crime documentary on the Iranian self-appointed vigilante and serial killer Saeed Hanaei has been translated into Turkish almost 20 years after it was first released.

Va Ankaboot Amad (And Along Came a Spider, 2003) was directed by IranWire’s founder Maziar Bahari and was later nominated for an Emmy in the category of Outstanding Investigative Journalism. It gives a harrowing and graphic account of a campaign of femicidal violence in Tehran unleashed by a man known locally as the “spider killer”, who was eventually convicted of murdering 16 prostitutes in the city. Part of this comes in the words of Hanaei himself, in a chilling interview given on death row. Not only was he unrepentant, but hoped - not without foundation - that his zealotry would inspire others in Iran.

The film also contrasts the perspectives of Hanaei’s own family, who supported him in his bid to rid the world of the “waste of blood”, with that of the judge presiding over the case, Gholamreza Mansouri, and some of the victims’ children. It shows the long impact on society of imposed “honor” codes and a domestic legal system riven with loopholes that allow women to be abused.

Last year student and translator Ece Eroglu, 23, watched the film for the first time and embarked on a project to subtitle it in Turkish. In an interview with IranWire, she explained why the film sparked her interest and its ongoing relevance to Turkish and global audiences.

Could you tell us a little about yourself and your career to date?

I'm Ece Eroglu, a 23-year-old college student, an English teacher, translator, and linguist. First I studied foreign language Teaching at METU and then recently got into Bogazici University for a master's in linguistics. I've always been into social sciences and understanding humans, especially how the human mind works. Currently, I am pursuing an academic career.

How did you come across Va Ankaboot Amad, and what was your impression on watching it?

About a year ago a friend of mine who works in cinematography recommended Va Ankaboot Amad, and we watched it together with a group of friends on the same day. It was intense, and so striking for me that I couldn't get a good night's sleep for some time. I was stunned while watching it, along with all of my friends. It wasn’t until a few hours passed after the film ended that we could utter words to each other. We all literally choked up. But then when we started discussing it, there were several points of view and so much to say.

Why did you want to share this film with Turkish-speaking audiences?

To be honest, I got unsettled and felt the urge to do something, no matter what it was. I thought of one thing which might actually matter, and that was translating the documentary so that more people could reach it and experience those feelings. Maybe some potential Saeed Hanaei would come across this documentary and question himself before acting. I know it’s very unlikely, and I don’t want to seem like a Pollyanna, but that was my original, so to speak, idealistic thought. Sadly, these types of murders are very common in our country as well. Just in the year 2021, 280 women were murdered by men and 217 were suspected to have been murdered.

What is the legal status of sex workers in Turkey, how are they regarded and treated by wider society?

Prostitution is legal in Turkey. In fact, there are brothels where prostitution can be officially conducted.  However, giving way to it or promoting it is illegal and people who do so are subject to prison sentences of two to four years. Still, this doesn’t prevent prostitutes from being sold in return for a good amount of money.

A considerable number of sex workers [in Turkey] are transsexual people. There are no opportunities for them to earn a living, so more often than not, they earn money this way. Most of the time sex workers are not treated as human beings in our country. Unfortunately, they are maltreated and seen as nothing more than “garbage2 by society. They are unpleasant to talk to, or even look at.

In our language, we call them "hayat kadını", which roughly translates to "a woman of life". On the other hand, in some contexts where someone wants to highlight their way of living, they are also called "hayatsız kadın", meaning "a woman without life". This wordplay summarizes and reveals the position of a sex worker in Turkey. It’s true that they have legal rights, but they are so looked down on and humiliated that they struggle to actually live.

In 2017, four sex workers were killed in three days by someone with the catchline "No [to] prostitiution, yes [to] love". But as far as I have researched it, the crimes were not officially solved. Elsewhere many prostitutes are murdered by their customers. It’s just ordinary news in our country.

The film portrays a wide variety of speakers and lived experiences. Which parts struck you the most, personally?

The part where Saeed Hanaei's son talked proudly about his father and implied how he could take his place and keep up "the good work". Such a young boy growing up thinking it is cleansing to take lives is just unbelievably sad. He admits to the one thing that is normal, his feeling sad at first, as though it were something to be ashamed of, and calls it "childish". That was the only moment I could see his innocence, and it was instantly lost. His words expose how society shapes the minds of its younger ones in the most pathetic way. The primarily instinctive, humane feeling of being sad for lost lives is wiped away.

What do you think about the root cause of Saeed Hanaei's crimes?

His upbringing surely had a huge role in determining his personality. But I don't think that is all. He was not known as a bad person or a bad husband in general. He had this ideal, "better" vision of the world in his mind, and it seems as if he genuinely believed that the “decontamination” of prostitutes was necessary. He saw them as “bugs” that contaminated the minds of even religious people. As far as he is concerned, it was a public service, maybe even a reform.

I think he acted on an instinct similar to that of Hitler, Mussolini, Putin and others. In order to defend his people and preserve their beliefs, and for martyrs to not have died for nothing, he chose to take some "unimportant" lives, acting like a soldier for his version of Islam. I really think he believed what he did was purely good.

This is also observable in his speech. He wants his ideas to be taught at universities, and he wants to donate his organs. I don’t know if it's the case that his self-esteem is so low he is desperately looking for approval, but all of these things, along with the murders he committed, had been taught to him as what was "ethical". The part which is missing the most is proper education, and maybe some chemicals in the brain (it is believed that serial killers have a different chemical structure or communication of synapses; their brains work differently and are largely deprived of the area responsible for empathy).

How was the process of translation? Was there anything you found challenging or unexpected in the work?

Nothing more than the everyday struggles of translating from one language to another. I gave lots of thought to how to give the same meaning with minimal loss. However, one thing I could point out is I felt so much meaning had already been lost during the process of translation from Persian to English. It is common that some part of the original text or speech is left behind in order for it to make sense in the target language. Nevertheless, it is crucial for the translator to beat her/his brains out to find the equivalent phrase or structure in the language. I felt the English translation was to some extent superficial. But of course, I might just be wrong as I don’t know much about Persian.

How do you hope the film will be received in Turkey?

I'm actually afraid it will give people who are already prone to violence some ideas, as the film also gives a very powerful insight into Hanaei's personal thoughts and reasons to his murders. It even contains a demonstration of the killings. However, as long as it is watched until the end, where one of the prostitutes’ daughters talks about what she is going through, or the father's speech, no one will ever adhere to the ideas of Saeed Hanaei. It might allow many fanatics to see the other side of the coin. Therefore, I believe it will be striking for most people in Turkey.

For IranWire readers interested in the issues raised in the film, are there any Turkish films or documentaries you would recommend?

"Limonlu Kahve" and  "Bedensiz Ruhlar" are some of the documentaries on prostitution in Turkey. I don’t think there are any subtitles to them, but maybe I can work on providing English translations on my channel. I'm considering translating many more things which I think will be trailblazing for both Turkish- and English-speaking audiences.

Being an 'Accessory' to Abortion is Now a Crime in Iran

Why is the Judiciary Stalling on the Trial of Alleged Rapist Keyvan Emamverdi?

It's 2022, and Iranian Divorcées are Tired of Being Stigmatised