Montazeri and the 1988 Massacre of Prisoners 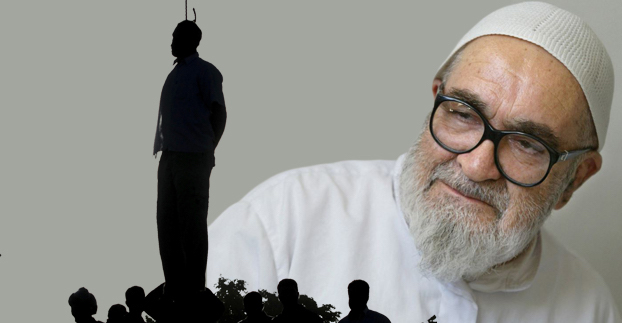 On August 10, the office representing the late Ayatollah Hussein-Ali Montazeri released an audio file from 1988, raising new questions about the execution of thousands of political prisoners that year, including over 2,000 jailed members of the Mojahedin-e Khalq or the People’s Mojahedin Organization (MEK). MEK originally played a role in the 1979 Islamic Revolution, but, following disputes and violent clashes with Ayatollah Khomeini supporters in the 1980s, the group turned into one of the Islamic Republic’s most controversial and long-standing opponents. It sided with Iraq during the eight-year war between the two countries, and, until recently, countries including the United States considered the MEK to be a terrorist organization.

The audio clip released documents Montazeri's August 15, 1988 visit with the members of Iran’s revolutionary death panel. Comprised of religious legal expert Hossein Ali Nayri, Morteza Ashrafi, then Tehran’s prosecuting attorney, deputy prosecutor Ebrahim Raeesi and Mostafa Pourmohamadi, the Ministry of Intelligence's representative to Evin Prison, the body was tasked with carrying out the orders of Ayatollah Ruhollah Khomeini with regard to political prisoners.

In 1988, Khomeini had declared in writing that “All those who, in prisons all over the country, have persisted and continue to persist in their hypocrisy are at war against God and condemned to death.” According to Montazeri’s memoirs, 3,800 people lost their lives in the executions of summer 1988.

So, with the release of this audio clip, what new facts have emerged, and how do they contribute to our understanding of this dark chapter in Iranian history?

-Montazeri as a Reliable Source

The release of the video adds further credibility to Montazeri’s accounts of those days. Hearing is believing. But in addition to this, the audio files do something else: they allow the listener to witness one of the most bitter meetings regarding political, security, and judicial affairs in Iran’s history. Rage and laughter, emotion and indifference, despair and concern, sincerity and deception (both obvious and hidden) between interlocutors do not exactly jump out in dry written memos. But now they are here in this audio clip to be heard verbatim.

At moments in the recording, Ayatollah Montazeri registers his concern that anyone else will join the ranks of the dead. “I’m opposed to even a single one more,” he says at one point. One of those responsible for carrying out the slaughter replies that 200 prisoners are in solitary confinement, and that problems will result if those prisoners are released and return to the general population. Although the clip reveals emotion in some places, some of the most disturbing and strange moments include the dispassionate back-and-forth between officials with the power to seal the fates of 200 prisoners by giving them death sentences.

Montazeri's stance in the clip will certainly come as a surprise to some, as the cleric has not been heard being so frank about the 1988 executions before. He called members of the death committee “historical criminals”, presumably to their faces, and claimed that the case is one of the greatest crimes to take place in the Islamic Republic. He also predicted that in future Khomeini will be thought of as a bloodthirsty murderer. The audio file presents a number of these types of statements — claims that did not appear in Montazeri’s written memoirs.

The clip also reveals the extent to which Khomeini’s son Ahmad Khomeini’s was involved in the events of 1988. Two points in particular hold significance. First, in collaboration with the intelligence ministry, the younger Khomeini had already set out designs for cracking down on dissidents. For three or four years prior to 1988, he had stated in newspapers, journals, and communiques that all MEK members should be put to death. As part of the attack on the monafeqin (Ahmad Khomeini’s highly polemical term, meaning “hypocrites,” and regularly used by him during the 1980s), he welcomed the chance to raise the issue with the elder Khomeini himself, being sure to secure in writing as much support from his father as possible.

In fact, in the clip, Montazeri makes it clear that that dealing with the Mojahedin-e Khalq’s assault on Iran was but an excuse for following through on a long-standing plan. Owing to the fact that some of those executed were members of other leftist groups, it had been clear even before that the executions were a premeditated project. Montazeri’s audio now further confirms this fact.

Secondly, Ahmad Khomeini was also in such firm control of his family that he didn’t permit detailed information about the killings to reach his father, and the clip provides new evidence for this. Montazeri himself couldn’t even secure a 10-minute meeting with the Supreme Leader: “They’ve cordoned off Mr. Khomeini from everyone,” Montazeri says in the clip. And it was not merely Ahmad doing the cordoning off: in one instance, Mohammadali Ansari — Ahmad’s former agent to his father’s estate, who now handles the affairs of Ahmad’s children — blocked a dissenting judge’s objections from reaching Ayatollah Khomeini, telling him: “You have no right to speak to the Imam. You will kiss his hand and then relate the proceedings to Mr. Ahmad.”

Also brought to light is new information concerning the manner in which prisoners were tried. Examples of these unjust processes can be found in official documents: a letter to Ayatollah Khomeini from a religious judge of the Khuzestan Revolutionary Court dated August 14, 1988 states that some of those detained “were prepared to talk and give up information,” but were executed “in the interest of the Islamic Republic” because they had not been able to prove that they had defended Iran in its eight-year war with Iraq or because they were accused of siding with Iraq. The newly-released Montazeri file reveals that even those who insisted they had fought in the war on Iran’s side were put to death. For example, one prisoner was, in the course of interrogation, asked to denounce the MEK. He agreed. He was then asked if he was willing to go the front in the war against Iraq, and responded similarly. Finally, interrogators asked him if he was willing to walk on landmines. The prisoner responded: “Is the whole country willing to go walk on landmines? These things shouldn’t be expected of a new convert like me.” The attendant official then said it was clear the prisoner was unrepentant and still supported the MEK, and his execution was carried out.

Did Khamenei Support the Executions?

Up to now, the current supreme leader Ayatollah Khameini has been portrayed as one of those who opposed the slaughter in 1988. The audio file makes clear that after the widespread crackdown on prisoners, executive officials pursued a campaign of deception, intending to tell the nation that those executed had been in contact with foreign powers. One of those present in the meeting indicates that Ayatollah Mousavi Ardabili (then head of the Supreme Judicial Council) and Ayatollah Khamenei (then president) were in on the plot.“So many lies we would tell the people,” Montazeri said. “So many untruths, in this Islamic Republic.”

One extremely disturbing aspect of the audio file is that the voices of those responsible for issuing death penalties can be heard for the first time. In the clip, they offer a few points in their own defense. They say that they have learned how to suppress extremism — if they had not learned this, they say,  the number of killings would have been three times greater. They also state that they would never argue with Ayatollah Khomeini’s edict. They complain that the Supreme Judicial Council has withdrawn itself and refused to get involved in the issue. They insist they have done due diligence in giving prisoners space to part ways with the MEK, but because they had received no response, they carried out the execution orders.

In one especially bitter moment on the audio clip, Montazeri asks one panel member: “Have you been telling prisoners that if they answer ‘no’ they will be executed?” The member responds, “No, I didn’t say that to anyone.” The panel has no other response to this simple question from Montazeri. “Mr. Nayri, if a person were to ask you why you have put to death a prisoner sentenced to 10 years’ jail time, what would you say? We’ll regret that rashness when it comes time to execute someone sentenced to hanging.” These dialogues illuminate much about the trial process that condemned thousands.

Death panel members were divided, and in-fighting was pervasive

The audio contains further striking revelations of incompetence and hypocrisy on the part of Ayatollah Mousavi Ardabili, head of the Supreme Judicial Council at the time. He not only abdicated his own responsibility in the case but also fanned emotional flames, abetted propaganda efforts, and worked with the others to cook up means for a cover-up. And it wasn’t just Erdibili. The clip neatly exposes  the squabbles and divisions between death panel members: one panel member accuses the body of playing politics, while another says it shirked responsibility by teaching classes every day until noon and meeting only three times a week. Montazeri confirms this: “To hell with them all.”

Another new fact brought to light is the mendacity of some members of the panel. One member claims that some prisoners were spared execution because members of their family had been previously put to death — this claim while there were clear examples of families like the Behkishis, who lost five members to state executions in 1988.

Mostafa Pourmohamadi, the Intelligence Ministry’s representative to Evin Prison, has previously denied his presence in the body: “I wasn’t involved in the death panel,” he has said. His voice can be heard on the audio clip, leaving no room for further denial. Pourmohamadi definitely sat on the death panel of 1988.

Other revelations will likely come to light as a result of the audio clip’s public release, and further investigation into its content. Countless questions remain around the events of 1988. Before the release of the clip, the world knew that Montazeri objected to the executions of 1988. But the audio file has provided further documentary evidence of his protest against the very regime he helped to build, and the clash among Iran’s most powerful figures of the time. Now the world knows the full extent of Montazeri’s outrage. It was a bloodbath — a bloodbath that had the full approval of and was carried out by the highest powers in the Islamic Republic.