The My Stealthy Freedom Facebook page should not be categorized as a “political struggle”, even though some of its supporters — and a few more of its antagonists — like to do so. Instead, it is a civil action working toward a specific goal: Saying “Yes” to a choice in how to dress, and “No” to forced hejab.

But the page’s impact has not remained limited to this single question. It has become a hub for citizen journalists who feel a responsibility toward what goes around them. When women became victims of acid attacks in Isfahan, a young woman from the city bravely used her no-frills mobile to record and transmit videos that exposed the lies, the silence, and the denial by the authorities. She recorded protests by the people, and the deceit by officials, moment by moment.

This episode of our documentary is about these events in Isfahan.

You might ask why we are publishing the documentary in this episodic manner. The answer is this: The My Stealthy Freedom page was built on Facebook, photograph by photograph and story by story. So we decided to follow this example and present our documentary scene by scene. Afterwards, we will put together the final work, including comments, messages and responses. In fact, these videos are part of the production process, so you can participate in the final product too. Send us your views — for, against, critical or approving — and your questions to:

My Stealthy Freedom Documentary, Part 1: A Page Is Born 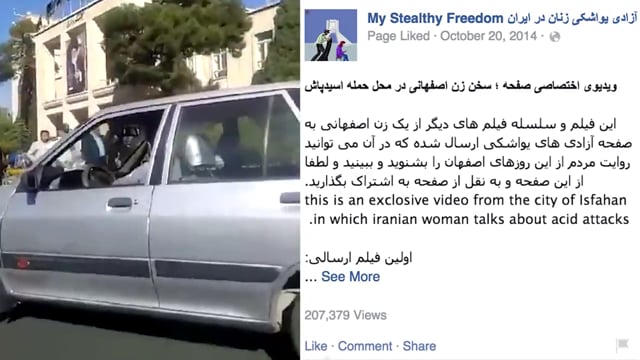 Shahrokh Heidari
Continue to next article