My Stealthy Freedom; Part 11, The Companion

Although Masih Alinejad posted her official wedding photo on Facebook, hardliner media in Iran still call her husband “the boyfriend,” “sexual partner” or other derogatory terms. Masih herself calls him her “companion”, and he calls Masih the “Eagle of Qomi Kola” – referring to the village where she was born.

Like Masih, the Companion is a journalist, although hardliner media characterize him as an escaped counter-revolutionary and “part of a conspiracy to overthrow the Islamic Republic through armed action.” They also accuse Masih of being an agent of foreign intelligence agencies, including the United States’ CIA, Israel’s Mossad and Britain’s MI6, which allegedly ordered Masih to “promote promiscuity in the Islamic Republic, especially among girls and women, through projects such as My Stealthy Freedom.”

One might expect this couple to live a mysterious life reminiscent of a thriller or detective story – and that any film about them would resemble a James Bond movie. But the truth is, when we met them, they were nothing like that. The Eagle and the Companion live in the world of journalism; they are both professionals in their field, although they have different styles and approaches.

The Eagle, Masih Alinejad, is always searching for new ways to encourage her audience and for citizen journalists to participate actively, while the Companion, Kambiz Forouhar, is a journalist in the more traditional sense. Of course, he never forgets to pay attention to his Eagle, who believes that without him she wouldn’t have survived exile, and that she would have abandoned many of her projects, including My Stealthy Freedom.

My Stealthy Freedom Documentary; Part 11: The Companion from Iranwire.com Vimeo on Vimeo. 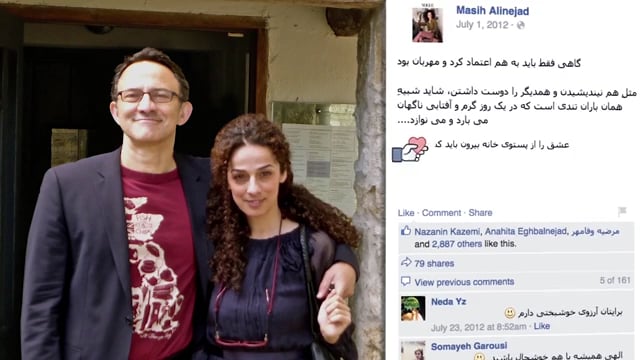 If you’d like to get involved in the making of this documentary, feel free to send us your comments, videos or photographs. Just follow the instructions at the end of the video.

Watch all the episodes of My Stealthy Freedom Documentary: