Dr. Chinda Brandolino, the Far Right and Disinformation in Argentina

This article is part of IranWire's ongoing coverage of Covid-19 disinformation in different countries, in partnership with Health Studio.

When we launched Health Studio we expected a mixed response on social media, with some positive reactions, and some challenging the scientific evidence we seek to promote.

We didn’t expect to find a story uncovering the links between the far right, foreign influence, and anti-Covid disinformation in Argentina.

On Facebook in particular, it was noticeable that many of the comments and messages we received repeated almost verbatim the same disinformation message: that Covid-19 is an invention of the "New World Order" to decrease the world’s population, and that vaccines would fulfil the same objective, sterilizing those who receive them.

Most of the comments used the same or similar text, words and pictures, and their profiles reference the same character as evidence for their "truth": Doctor Chinda Brandolino.

So, who is Dr. Brandolino?

Chinda Concepción Brandolino studied medicine at the Catholic University of La Plata, and is registered to practice in Buenos Aires province, the capital city and Tierra del Fuego. She is also a Medical Examiner. She first rose to wider public attention in 2018, when she began to appear in workshops and the media talking about "gender ideology" and opposing a law that would legalize abortion in Argentina.

Today on social media, Brandolino is well known as "The Woman of the Light Blue Wave", referencing the light blue scarves used by anti-abortion proponents and associated with certain extreme right-wing political groups.

On her official Facebook fan page, Brandolino has doubled her audience since the beginning of the pandemic and currently has more than 150,000 followers. On Twitter her account is followed by more than 26,000 people and she has her own "Fan Club" created in April 2020, coinciding with the first weeks of lockdown in Argentina.

Most of her followers also have Facebook links to extremist strains of ultra-Catholicism and/or to far-right political groups.

While she currently appears in Argentinian media as a "Covid-sceptic physician", or a conservative anti-abortion advocate, Brandolino’s history reveals a much darker political past.

In 2015, Brandolino first appeared on the Argentinian political scene running as National Deputy for the Todos Por Buenos Aires party. In her campaign messaging, she voiced several controversial and scientifically disproved conspiracy theories. She introduced the "anti-vax" conspiracy theory to Argentina and alluded to the extensively disproved conspiracy that autism could be linked to vaccination. Brandolino also promoted the conspiracy that vaccines against Hepatitis A, Rubella, Chicken Pox, Shingles and Rabies require ingredients from an aborted human foetus, again a twisting of the scientific truth that some variants of some of these vaccines utilise a lab grown culture that was originally extracted over 50 years ago. In Argentina, the Argentine Society of Vaccination and Epidemiology (SAVE), presents a complete report on the false myths about the vaccines installed by Doctor Brandolino.

Their candidacy did not reach 2% of the electoral roll, but that was not the end of her political career.

2015 also saw Brandolino appearing on the far right political scene – participating in the International Identity Congress, alongside people like Ku Klux Klan grand Wizard David Duke, where, in a talk entitled "Population control and the New World Order" she was seen referring to Hitler as "the Führer". 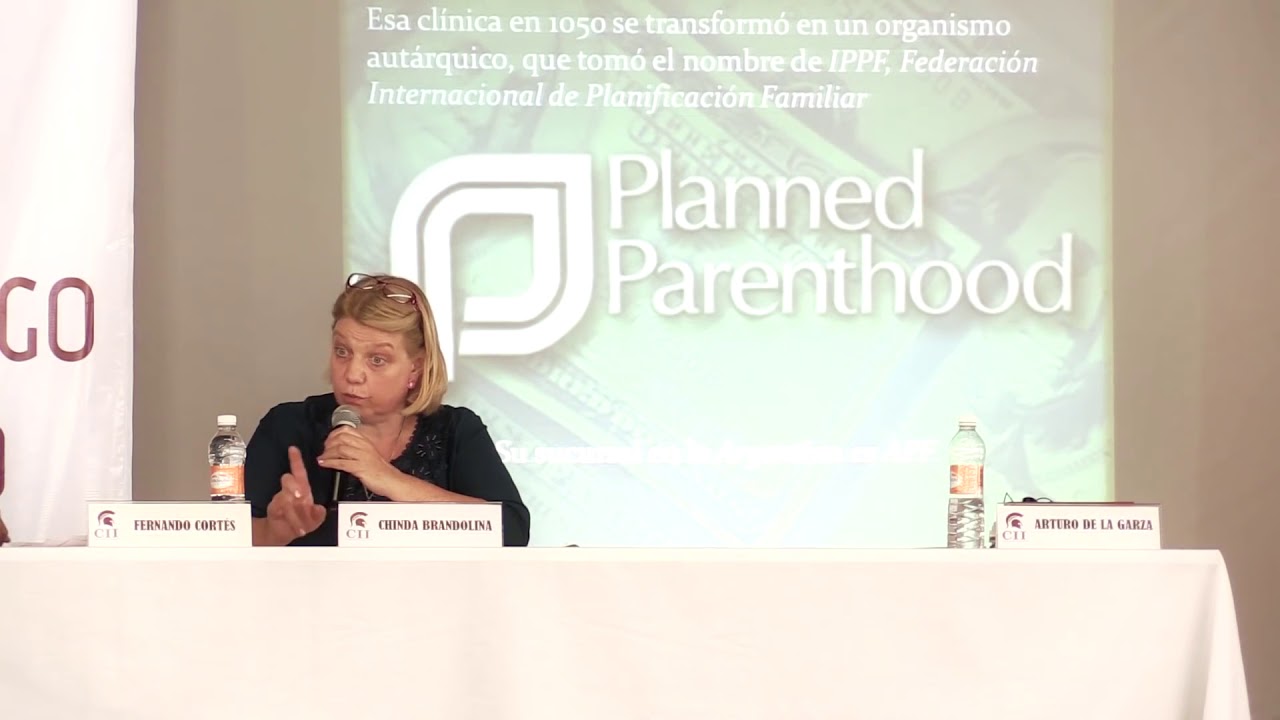 Chinda Brandolino (red arrow) in a photo from the Congress, posted on a neo-Nazi website.

Brandolino’s association with far right extremist politics went underground for a few years, but in 2019, she ran as National Deputy for the Proyecto Segunda República, an ultra-nationalist, far right, catholic party founded by Adrián Salbuchi, who at that time was running for president.

During the electoral campaign, Salbuchi and Brandolino’s policies included "re-founding a sovereign state" and repeated the false claim that vaccines are dangerous.

Image: Chinda Brandolino and Adrián Salbuchi, in the campaign poster promoting their candidacy.

During the same campaign, Brandolino was also close to other political parties with which she sought alliances, among them, the Frente Patriótico (Patriotic front) of Alejandro Biondini, a self-proclaimed ultranationalist, pro-Nazi and antisemite. His positions were in fact so extreme that a court in Argentina denied the Frente Patriótico official recognition as a political party.

Alejandro Biondini is a self-proclaimed Nazi and anti-Semite.

On Twitter, Biondini thanked Chinda Brandolino for her partnership and encouraged his followers to follow her line of thought.

Even after a second electoral defeat, Brandolino’s association with Nazi-sympathising extremists persevered. After Argentina’s 2019 elections she avoided the media, until reappearing in March 2020 as the coronavirus pandemic hit Argentina hard.

Her unholy union of far right politics and disinformation was cemented.

With the arrival of the pandemic, Brandolino and Salbuchi found a population hungry for information. Into the information vacuum Brandolino and Salbuchi pushed disinformation: the coronavirus does not exist; the pandemic is a plan developed by the “New World Order” promoted by Bill Gates and George Soros, with aims to reduce global population. In an interview with Argentine model Nicole Neumann, Brandolino explained her conspiracy theory about the origin of the coronavirus and later, when she was publicly denounced for her statements, she repeated it once more on her Facebook page.

Chinda Brandolino denying the existence of the coronavirus pandemic.

The Bill Gates/ Soros conspiracy theory has been disproved countless times, and it has been scientifically proven that coronavirus was not created in a laboratory. The George Soros accusation is the latest iteration of various far-right Soros conspiracies, perpetuated by anti semitic groups around the world, who oppose the Jewish Investor’s £32 billion charitable programmes.

Brandolino also used the pandemic as an opportunity to attack vaccines once again, but this time, she does not claim the vaccine is "unnecessary" or causes autism, but that it is a genetic experiment that causes sterility in men, and delays puberty in children by "modifying human DNA". Brandolino has exploited the public’s lack of expertise about new technology used in the Pfizer vaccine to make scientifically impossible accusations.

In addition, throughout 2020 Brandolino has spread false news about a supposed "mandatory law for Covid-19 vaccination" in Argentina that was being debated in Congress. Argentina did not approve, and has never debated, any law that requires people to be vaccinated against the coronavirus.

Image: More than once, Chinda Brandolino falsely claimed that Argentina would impose a law to vaccinate its population against coronavirus. This has in fact never been debated in Congress.

Most worrying of all, perhaps, is the success she has found online. There are numerous Facebook pages, Twitter accounts and YouTube channels that reference and repeat Brandolino’s disinformation.

Over the years, Brandolino has made a career capturing the attention of conservative and ultra-religious sectors of Argentine society with her extreme views. Her exponential growth during the pandemic (she doubled, and in some cases tripled her followers on different social networks during March 2020 alone) is undoubtedly related to the fact that, in difficult times, when people are desperate for information about an unknown event, fake news and conspiracy theories spread as fast as a virus. Fake news is cheap and easy to produce and reproduce, as evidenced by Brandolino’s platforms, and it gives consumers a false sense of security.

Links claiming to provide "evidence" almost never relate back to recognised, respected sources or institutions, often simply linking to other conspiracy sites. If the fake news does not work, it is extremely easy to modify and spread again. Bad actors reap the financial benefits that social media and an agitated following provide.

The next question to address is whether this is solely an Argentinian problem, or the symptom of an international pattern. For that, we will need to follow the money.