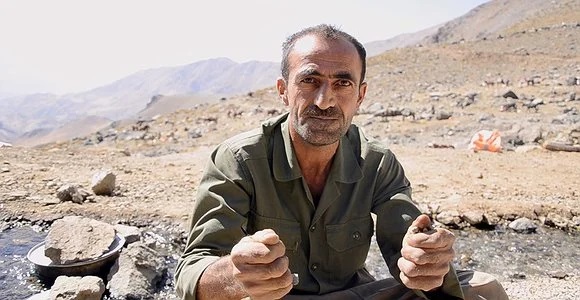 The lead protagonists in this film are Kurdistan and the kolbars of Kurdistan. In one of Iran’s most remote, deprived and little-understood regions, every day hundreds of people – from 12-year-old boys to men in their 70s – strap up to 50 kilos’ worth of goods to their backs and set out on foot, singing, on the days-long and dangerous journey across the border to Iraq.

Kolbars are border couriers who physically shuttle large amounts of items for sale, from tissues to cigarettes to white goods, between Iran and Iraq. Their very existence is testament to the decades-long wanton neglect of Kurdistan by the Islamic Republic of Iran, which regards the minority communities in this mountainous border province as a security threat and does all it can to stifle local economic growth.

Not only are the breadwinners of many Kurdistani households now forced to go into kolbari to survive, but they face untold perils along the way; from falling, to treading on unexploded landmines ,to being shot at by border guards. This documentary follows the kolbars down the difficult and winding mountain paths, and tells the story of their daily lives in their own words.

Fimmaker Jamshid Bahrami is from Kurdistan himself and formerly worked as a kolbar before having to flee to Europe. In partnership with IranWire he has produced They Shoot Kolbars, Don’t They? using footage and interviews with kolbars that was filmed by his contacts inside Kurdistan. The result is a shocking glimpse of the lives of a largely-silenced group of people on the margins who, in their own words, “sell their tomorrow for today’s bread”.