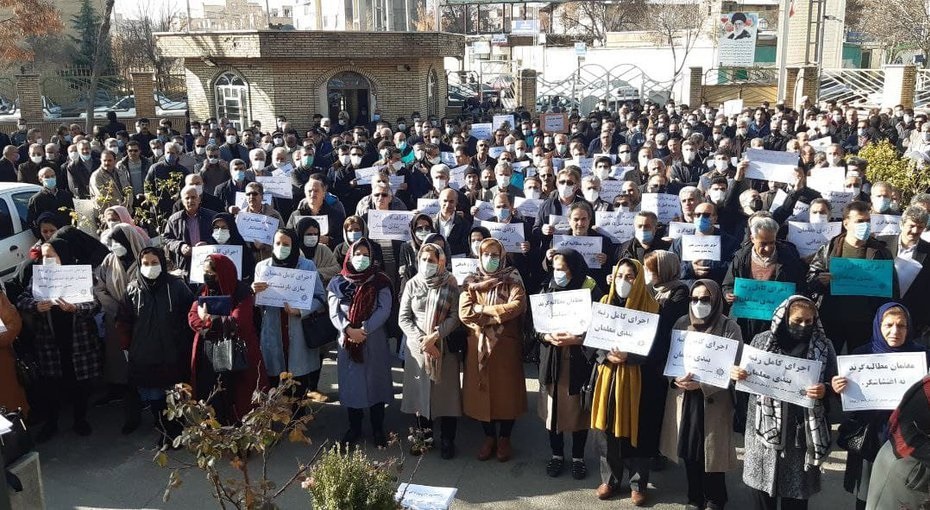 Tens of thousands of Iranian teachers joined a third day of nationwide protests on Monday following a rallying call from trade unions. Security forces attacked some of those present in front of the parliament building in Tehran and at other locations such as Sari, Mazandaran. Videos posted on social media showed uniformed officers trying to arrest demonstrators, prompting others in the crowds to intervene. 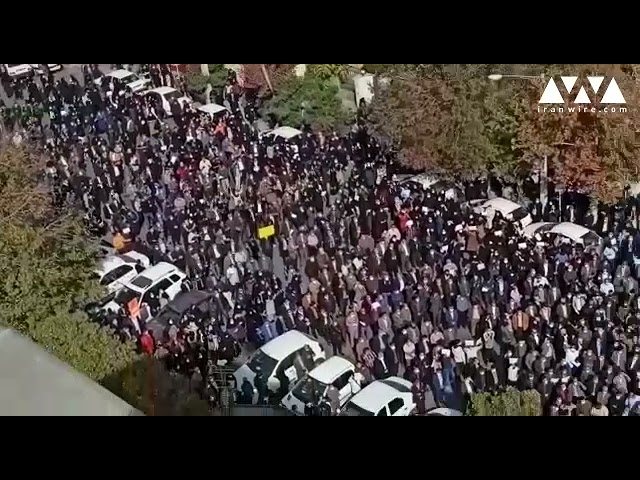 The government has tried to dissuade educators from taking part in the past few weeks by summoning, threatening, beating and detaining some of those who spoke out. If anything, Monday’s demonstration indicated these measures did not smother criticism but stoked it.

What are the Teachers’ Demands?

Both current and retired teachers took part in the latest action, part of a three-day nationwide campaign of protests and sit-ins in 150 different cities and villages. The first broad aim was to demand better pay, resourcing and working conditions in line with the demands of other public sector workers in Iran.

The second, more political in nature, was to push back against the heavily ideological content of the Iranian national curriculum, considered by some to be so serious an impediment to learning it may be infringing children’s rights. Many teachers taking part in the rallies also want to be able to educate students in their mother tongue, not only Persian, in areas like Kurdistan, Sistan and Baluchistan, Azerbaijan and Khuzestan.

Teachers at Monday’s protest also chanted slogans calling for the release of their imprisoned colleagues. Dozens of trade unionists have been arrested, interrogated and subjected to prison sentences for speaking out about the dire state of education in Iran in recent years. At the time of the protest, at least 14 educators were being held in custody over their peaceful activism.

Finally, those who took part in the mass protest on Monday wanted to challenge MPs who were due to review and approve the new budget bill on Sunday, December 12. The session was postponed until Tuesday due to the ongoing uproar. 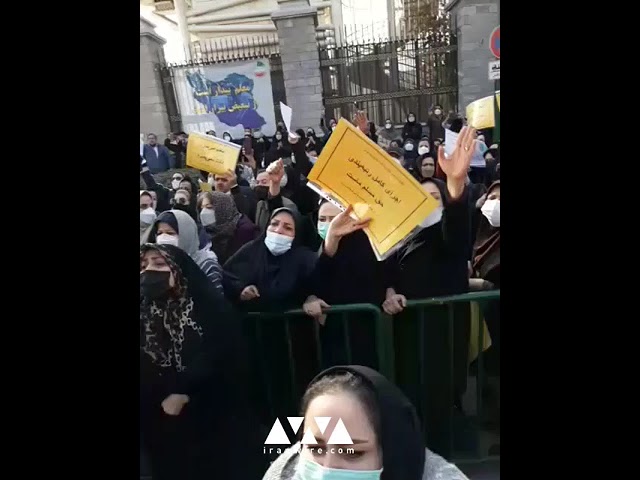 At the end of November and after months of deliberation, self-described ideologue Yousef Nouri was finally confirmed as Iran’s new Minister for Education under President Ebrahim Raisi. On December 12, Raisi laid out a new budget bill for 2022-23 that amongst other things, proposed increasing the Education Ministry’s budget by 14 percent, but without any provisions for teachers' salaries.

Teachers’ pay disputes over pay go back more than 10 years, to the Ahmadinejad era. In 2012, a government decree required 20 to 50 percent of all government bonus payouts to go to ordinary employees – in every part of the public sector except education. The excuse for excluding educators was that they numbered more than one million and the budget could not stretch to them all.

In October 2015, in a bid to calm down the discontent, the government proposed a so-called “ranking bill” in which teachers of all levels would receive a small pay increase. Mohammad Bagher Nobakht, head of the Planning and Budget Organization from 2016 to 2021, was holding talks with teachers and unions about the plan right up until the end of Hassan Rouhani’s tenure. But with the change of government, it was declared “illegal” and scrapped.

Previous plans approved by the Iranian parliament’s Education Committee, which had the support of trade unions, also stipulated that schoolteachers be paid the same as their colleagues with equivalent qualifications at universities. In the new bill, this so-called “peer-to-peer alignment scheme" has been completely excised.

In addition, any pay rises agreed by parliament will now only benefit teachers who are officially employed by the Ministry of Education. Contractors and teachers at private and non-profit schools will remain on the same rates of pay.

Iran’s Educational Trade Unions Coordination Council slammed the changes in a recent statement. “The government wants to put together a ranking scheme allocating only 12.5 trillion tomans,” it read in part. “By contrast, the full implementation of a scheme based on parity with the salaries of university faculty members requires at least 76 trillion tomans.” The paltry pay rise for ordinary teachers, it said, was “in clear contradiction” with priorities laid out in Iran’s Sixth National Development Plan.

Another aspect of the current strikes relates to the equalization of state pensions for teachers. The salaries of education sector retirees are much lower than those of others in the public sector. A bill to correct this was received by MPs on February 13, and though its broad principles were approved on June 7 this year, it has not been discussed in parliament or advanced further since mid-September. In the same period salaries in other arms of the public sector, including the judiciary, were increased.

The approval of the bill was postponed until Tuesday this week due to the sit-ins and strikes. Announcing the news on social media, the Iranian Teachers' Union called the plan a “great betrayal” and urged teachers to strike on Monday. “We warn parliament that if the comprehensive [previously-agreed] system is not implemented, gatherings and strikes will continue and expand,” it added.

Demonstrations have taken place in at least 21 provinces so far, and in most cities with large populations. In a fresh statement on Monday, the Coordination Council said: “Union activists have incurred a great deal of costs. But they never tire of demanding and stepping up their efforts to provide quality education for students, and defending the right to a dignified life for all.

“With the unveiling of the 2021-22 austerity budget, the government showed it had no appetite to resolve the problems. This is a budget in which the grant for military and non-accountable institutions has multiplied, and the livelihoods of the majority of society, including education staff, were neglected. Today’s rally and the protests of the coming days are imposed on us by those who would challenged the financial and psychological security of Iran’s large family of educators.”

The unions’ umbrella body also condemned the arrest on Saturday of its spokesman Rasoul Bodaghi, and the upcoming politically-motivated trial of the Council’s lead inspector Jafar Ebrahimi, as well as the imprisonment of trade unionists Mohammad Reza Ramezanzadeh, Esmaeil Abdi and Mehdi Fathi. The Council wrote that if the judiciary thought such cases would deter industrial action, “they are sorely mistaken”.

'Teachers Shout Out, Demand Your Rights': Protests Erupt Across Iran

One Third of School Pupils are Illiterate and Lack Basic Maths

Omicron Fears as Covid-19 on the Rise in Iranian Schools

The Fight for Teachers’ Rights Exposes the Government’s Illegitimacy

Seven Teachers Arrested in Latest Round of Strikes

‘They Won’t Listen. So We Take to the Streets’: Teachers’ Protests Continue

'Teachers Shout Out, Demand Your Rights': Protests Erupt Across Iran

The Teacher Who Called for Khamenei’s Resignation

The Teachers’ Activist and His Lessons of Peaceful Civil Disobedience