Activists Arrested for Handing out Flowers 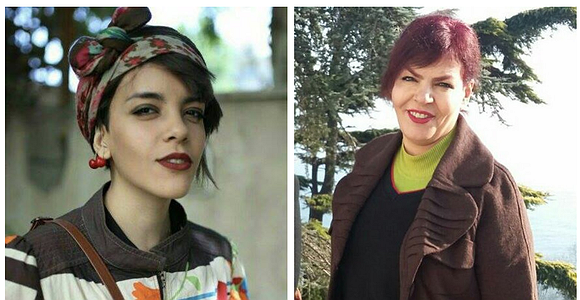 Two women have been arrested for handing out flowers on a metro train as part of a campaign against Iran’s compulsory hijab law.

The mother and daughter, Monireh Arabshahi and Yasaman Aryani, had draped their scarves over their shoulders and took wicker baskets filled with flowers on to Tehran's metro, which they then handed out to everyone in a women-only metro car to mark International Women’s Day.

A video [in Persian] of the pair giving flowers to women in the metro car was widely shared and viewed on social media on March 8, International Women’s Day.

Yasaman Aryani, 23, is a civil rights activist and a theater actress. She has taken part in the White Wednesdays campaign, which was launched by women’s rights activist Masih Alinejad as a protest against mandatory hijab. Women take part in the campaign by wearing a white headscarf in public on Wednesdays, and Aryani has been very public about her support for the movement, posting photographs and videos of herself not wearing hijab on social media.

On Monday, April 8, Aryani tweeted that she had been expelled from performing in the play "Actors Studio" at Malek Theater, which is owned by the Ministry of Culture and Islamic Guidance. Then, on Wednesday, April 10 she was arrested at her home. “At 3pm on Wednesday, two women and a man rang the doorbell,” an informed source told IranWire. “They had a warrant for her arrest and to enter the house. Yasaman, her father and her sister were at home. The agents confined them in a room and when Yasaman’s father protested, they threatened to shoot their dog Mason if he continued.”

According to the source, the agents confiscated a number of Aryani's possessions, including books, her laptop and her notes. In a brief call after her arrest, Yasaman Aryani told her family that she had been detained in connection with a complaint filed by the so-called “morality” court’s prosecutor. But the source told IranWire that the video was the real reason for the arrest of both mother and daughter.

“Two days ago, another woman who was with Yasaman and her mother in the metro and who was active in the White Wednesday campaign was contacted by the Intelligence Ministry and was told that she would be arrested if she continued her activities,” the source told IranWire. “Separately, they also arrested the wrong woman for distributing flowers in the metro.” The “wrong woman” was Zhinus Sobhani, a Baha’i and a former secretary of the Defenders of Human Rights Center. She was arrested at her home on March 31 but was released a few hours later. According to Sobhani’s brother, “she was told at the court that she had been arrested because she had removed her hijab in the metro on Woman’s Day and because she had tried to pervert people’s minds by speaking against the Islamic Republic.” It turned out that she had been arrested because she resembled another woman who had given people flowers in the metro and whose photograph had been posted on the internet.

The arrest warrant listed both Yasaman Aryani and her mother Monireh Arabshahi. Arabshahi is also a civil activist who, before her daughter was arrested, had traveled to Lorestan to help flood victims.“The moment that she learned her daughter had been arrested, Monireh returned to Tehran,” IranWire's source said. “She went to Vozara Detention Center to find out about her daughter and was arrested right then and there.”

When Yasaman Aryani was being taken to the court from the detention center her father was able to meet with her. She told him that she was being transferred to Gharchak Prison. According to IranWire’s source, when her father asked the agents about it, “he was told that they would keep her at Gharchak Prison until Saturday [April 13] and she would be returned afterward but that for a month she would not be allowed to use the phone and the family could not appoint her a lawyer.”

This is not the first time that the two women have been arrested. Yasaman Aryani was first arrested, along with 17 other women and around 50 men, on August 2, 2018 on Vali-e Asr Avenue in downtown Tehran after they helped an elderly woman who had been thrown to the ground by anti-riot units during protests against high prices and inflation. She and Niloofar Homafar, another arrested protester, posted a video using a mobile phone from inside a State Security Force van as they were being transferred to jail.

The women were transferred to Gharchak and Fashafuyeh prisons and, after 75 days, they were transferred again, this time to Evin Prison, where they were due to be tried. Judge Mohammad Moghiseh — known internationally as a consistent violator of defendants’ rights — sentenced Yasaman Aryani to one year in prison for disrupting the peace. She was released on February 13, 2019 after the Supreme Leader Ayatollah Khamenei pardoned her and a number of other prisoners on the occasion of the 40th anniversary of the 1979 Islamic Revolution.

Monireh Arabshahi was first arrested in January 2019 after she participated in protests in front of Tehran University. She and others were protesting against the fact that, in December 2018, 10 students died and several more were injured after they had been traveling in a university-owned bus that was in poor condition. She was detained at Gharchak prison for six days before she was released.

Now she is back in Gharchak and is trying to find out what has happened to her daughter.

Letter from Prison: Why My Hunger Strike Must Continue, October 2, 2018