Hannah Somerville
9 min read
752 is Not a Number follows the personal journey of bereaved father and husband Hamed Esmailion in the aftermath of the downing of Flight 752
Filmmaker Babak Payami dropped other plans to begin the project as soon as the disaster occurred in January 2020
As well as covering the efforts of the Association of Families to establish the truth, film includes moments of acute, unspeakable grief
A total of 176 innocent people lost their lives when the plane was shot down by the IRGC
Payami's film, which will screen for the first time in Toronto on Friday night, aims to memorialize the PS752 story and ensure it is not forgotten
Inside Iran, PS752 families continue to face harassment and even imprisonment if they speak out about what happened. Many have turned out to protest nonetheless

On Friday night, the first feature-length documentary to focus on the Flight 752 disaster will premiere at the Toronto International Film Festival. Veteran filmmaker Babak Payami’s 752 is Not a Number relives the horror visited on scores of families in five countries after a passenger plane carrying 176 people was shot out of the skies over Tehran by the IRGC on January 8, 2020. Taking the personal journey of Hamed Esmaeilion, whose wife Parisa and nine-year-old daughter Reera were killed in the tragedy, as its point of departure, the film charts the families’ quest for justice out of the ashes of unspeakable grief, and demands answers of those who presume authority in both “East” and “West”. IranWire spoke to Babak Payami about the process of creating the film – and why, in his view, to turn a blind eye to incidents like Flight 752 is to enable the ongoing atrocities in Iran today.

Two years and nine months ago yesterday, at around 6.15am local time, a small, bright orb of light was observed crossing the pitch-black sky west of Tehran. It was picked up by air traffic control cameras; officers on duty speculated on the radio about what it might be. Eventually one said: “It’s a missile.”

Moments later the object impacted with a Boeing 737-800 aircraft leaving Imam Khomeini Airport, causing a blinding flash that surged across the horizon. Motorists in the Parand area who spotted the explosion cried out in alarm. All of a sudden the night sky was filled with burning debris: pieces of a plane, and of 176 lives, with all the suitcases and trinkets and travel documents and dreams they carried with them, and the lives of all those they touched that were now also in pieces, falling slowly.

What is known today about the Flight 752 atrocity was not known then. For instance, that there were not one but two Tor-M1 surface-to-air missiles fired, 23 seconds apart; that they were fired intentionally by the IRGC’s Aerospace Force; that less than six hours later, bulldozers would be dispatched to the scene to clear the wreckage – and with it, the evidence. 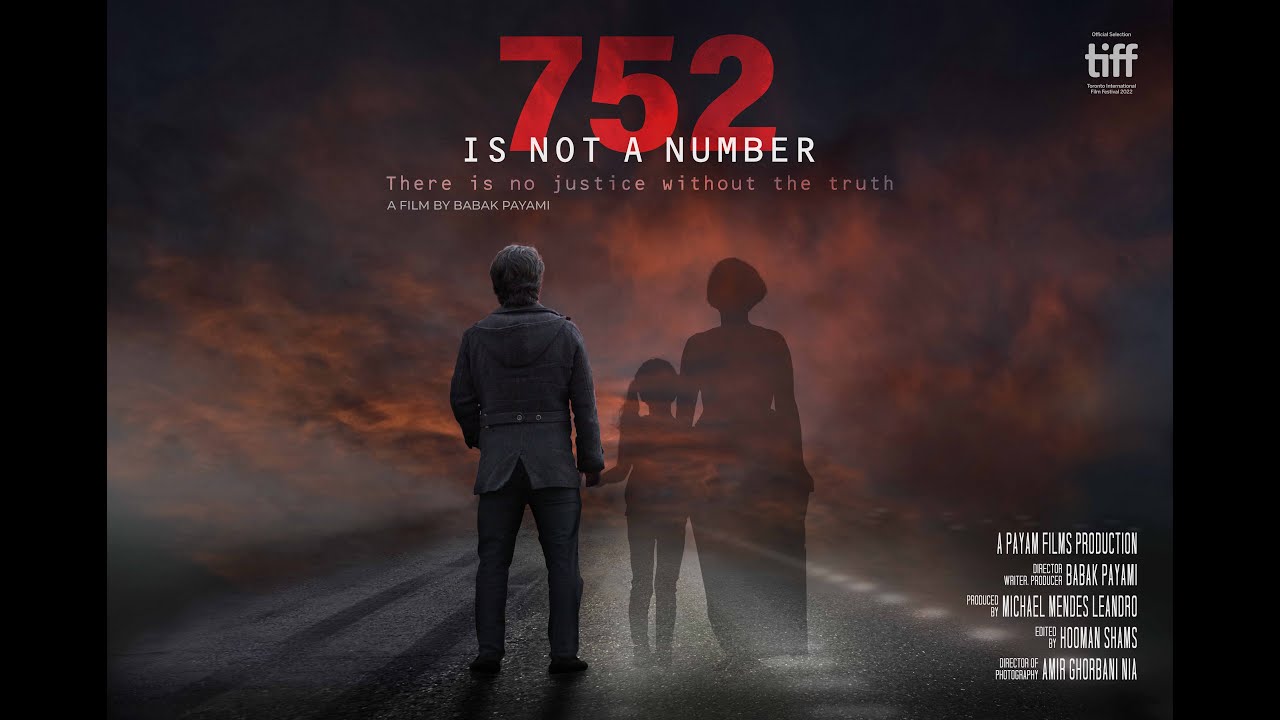 Many Iranians, though, remember exactly where they were that day. Babak Payami, a filmmaker and artistic advisor to the Tirgan Festival in Canada, was at home in Toronto making plans to embark on a new film project in the aftermath of a difficult period for himself and his family. “We were breathing a sigh of relief after a few years of worry,” he told IranWire. “I was going to start afresh, hit the ground running. I was making travel plans. Then suddenly, this news broke.”

Five volunteers for Tirgan, Suzan Golbabapour, Parisa Eghbalian, Ghanimat Azhdari, and a young couple, Parinaz and Iman Ghaderpanah, had been killed aboard Flight 752. Like others, Payami threw himself into helping organize the vigils, liaising on behalf of families with the Canadian Foreign Ministry, and arranging DNA tests for victim identification in Iran. It was in the midst of this that he met Hamed Esmaeilion.

The writer and dentist from Newmarket, Ontario had just lost Parisa, his wife, and his nine-year-old daughter Reera. From a place of unintelligible grief, he would go on to become the main spokesman for the Association of Families of Flight PS752 Victims, which has campaigned collectively for justice and accountability in the face of untold obstacles. As Payami relates in the film, both men quickly realized the journey they were on together would also need to be documented.

“Before I knew it,” Payami said, “all of my plans weren’t even on hold; they just faded away.

“Hamed and I have a deep understanding on many things, including that there is no justice. We were also in tune with what goes on; we live in a cruel world where there’s always a tragedy happening. People get desensitised, especially in the context of Iran, where there’s not a month where something tragic doesn’t happen. We knew the biggest challenge was making sure the story wouldn’t be forgotten.”

"The Purest Form of Filmmaking"

In the words of its director, the initial purpose of 752 is Not a Number was to tell the story of Flight 752 “accurately and safely”, and to interrogate political discourse around the event. The film includes harrowing footage from the crash site, and some of the televised pronouncements by Iranian officials on their version of events – all of which were later proven to be lies.

We also see such as Agnes Callamard, then-UN Special Rapporteur on Extrajudicial Killings and now secretary-general of Amnesty International, describing the litany of violations of international law committed that morning by the IRGC. The film touches on the at-times anaemic efforts of the International Civil Aviation Organization (ICAO), the Transportation Safety Board (TSB) of Canada and other “authorities” to establish the truth.

But above all this, 752 is Not a Number is a portrait of a family: once a happy three, now reduced to one, and as Hamed Esmaeilion himself points out, “I’m barely here”. The film is interspersed with deeply personal footage of Esmaeilion – much of it shot one-on-one, without equipment or a crew, during Covid-19– sifting through mailed condolences, sat among the toys in his daughter’s still-unchanged bedroom, picking up Reera’s health card from a stranger months after the calamity, designing his wife’s headstone, and amid the public-facing effort to secure justice for the PS752 victims, succumbing to intermittent moments of acute, intensely private, and unspeakable grief.

For Payami, recording from the sidelines was at times hard to bear. “There’s a famous cardinal rule set out by Werner Herzog that says when you’re making a film, you shouldn’t get involved with the subject matter. Well, that went out the door two minutes after Hamed and I met.

“It was very difficult for me to maintain my composure and make sure I memorialised his story without contrivance, and without interference, despite my emotions. This was the purest form of filmmaking I’ve ever done in my life.” Instead of the typical “fly on the wall”, he said, he felt like “a fly on the wall of an oven of smouldering pain, and eventually I couldn’t take the heat anymore”. On occasion, he and Hamed would sit and cry together.

The film also captures the endless frustration, away from the TV cameras, that has buffeted Esmaeilion and others in the thankless task of trying to piece together what happened to their loved ones. There are phone calls from “informants” demanding cash; a smashed iPhone thought to be Parisa’s, months later proving to be a red herring; arcane procedural rules hamstringing the ICAO and blocking affected parties from pursuing the criminal case that would, in any sensible world, have been opened on day one.

All this exasperation, too, was an experience Payami shared in. “This plane wasn’t shot down in the mountains somewhere,” he said. “It was shot down in the middle of a town near Tehran, a short drive away for emergency services. Hours later bulldozers were called in. If I have a bicycle accident at our local intersection there’s a greater degree of investigation than happened in Iran. Every day as I was reviewing the assembly of the story, I’d lose my breath saying: ‘What is this man going through?’.”

The timeline of events presented in the final, 98-minute film is therefore “incomplete”. Some key developments like the civil case won in Canada in 2021 are omitted. But by this point, Payami told IranWire, the priority had become the human aspect – and a particular gesture at the close reminds the audience that “this deep tragedy we saw of our protagonists was also happening to 175 other families.”

Complacency Kills - Then and Now

One pivotal issue raised by 752 is Not a Number is that international norms effectively handed the Islamic Republic of Iran, as the state in whose jurisdiction the crash occurred, the authority to lead the “investigation” – provided those conducting it were “independent”. In context, this is jaw-dropping. So too is the level of illegal comportment by Tehran that international bodies were apparently resigned to accepting. Payami told IranWire that in the course of researching the film, he was told by more than one expert: “Many countries don’t follow the rules.”

“There’s a certain degree of complacence, naivete and sometimes outright appeasement by foreign governments that has led to this,” he said. “From the get-go there was an obvious breach of the Chicago Convention and Article 13, and everybody was sitting back and watching.”

Outside the content of the documentary, this, for Payami, was what makes the case of Flight 752 emblematic: not just of the innate violence and illegitimacy of the Iranian regime, but of the “disease” in Western foreign policy that enables it. Namely, “a decoupling of issues when you’re dealing with tyrants.”

Today, inside Iran, the families of Flight 752 victims still face the prospect of harassment, arbitrary detention and torture if they speak out. “They are standing up to these people with such courage,” Payami said. “People have been literally tortured and flogged. Others have been dragged by their hair for yards to the police station because they went to the Ukraine embassy to show solidarity. They’re the courageous ones.

“I’m amazed at how strong these families are. I was there for almost every minute of the Association’s development, and saw the strength they’ve shown to put closure, bereavement and grief not aside, but in check, to make justice their first priority – and to make people understand that without truth, justice is meaningless. They spat in the faces of the compensation offers. They said ‘We’re not talking about money’. It’s not as if these families were rich, but they said no.”

The release of Payami’s film also happens to coincide with a recent spate of arrests and imprisonments of filmmakers in Iran. Payami, who left his country of birth in 2003 after being arrested over one of his own films, regards this as a natural development instead of an aberration. “The Iranian establishment has been emboldened. It’s shamelessly and blatantly overt about what it’s doing.

“What’s happening to Panahi, Rasoulof and others now is not unique and it’s not an escalation. We’re talking about a regime that killed thousands in a matter of months in the 1980s, that shut down the internet and killed at least 1,500 in a matter of days [in November 2019]. We’re talking about daily atrocities. But what happened secretly before is now happening overtly and nobody cares.

“The Iranian regime has been saying to our faces what they stand for. To turn a blind eye is a huge fallacy for Western democracies. It’s even been touted as an accomplishment. We are partly to blame. The so-called free world shares the blame.”

Remembering Victims Of PS752 Shooting Down Over Tehran

Flight 752: Chronology of a Tragedy

Stolen Lives: What Should I Do With Your Memories?

Could the Flight 752 Case Go to The Hague?

Remembering Victims Of PS752 Shooting Down Over Tehran

Stolen Lives: What Should I Do With Your Memories?

Could the Flight 752 Case Go to The Hague?