''Jews Use Sorcery for Espionage'' 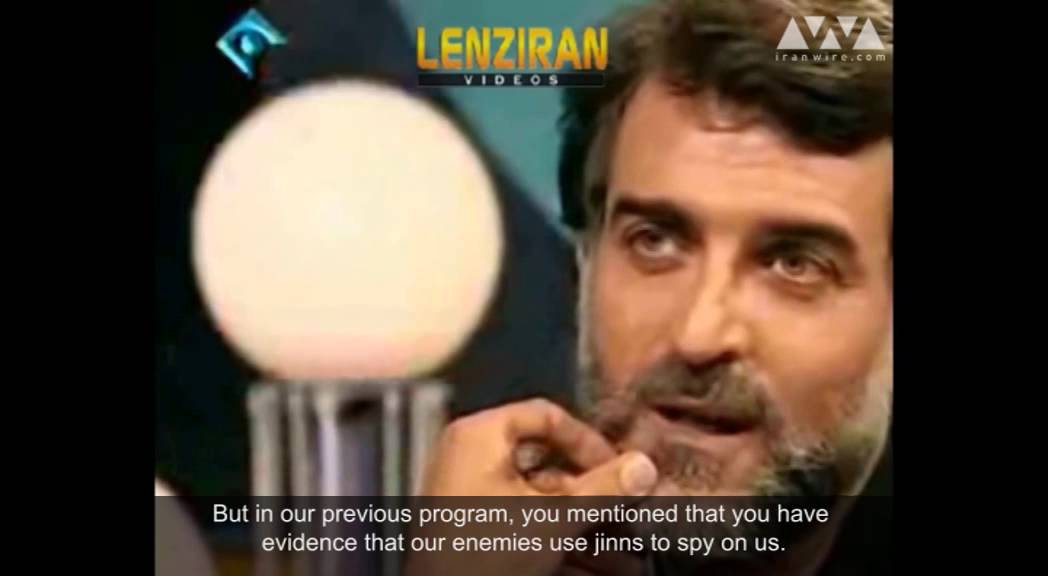 Iran’s state broadcaster, known as Islamic Republic of Iran Broadcasting, IRIB, has never been the country’s most dignified institution. But even by its own standards, the network plunged into a fresh abyss of superstition and fear-mongering with a recent broadcast in which Valiollah Naghipourfar, a cleric and professor at Tehran University, discusses the use of jinns, or genies, in public life. “Can jinns be put to use in intelligence gathering?” the presenter asks ingenuously, as though dragons can also serve as defense ministers and we’ve all entered the realm of the Hobbit. The cleric nods, as though speaking about a species of exotic elf: “The Jew is very practiced in sorcery. Indeed most sorcerers are Jews.”

The conversation moves on, and Naghipourfar discusses how the Zionists deploy jinns to undermine the Islamic Republic, and how the Jewish faith is especially adept at the black arts. Jinns, of course, are supernatural creatures, nearly always demonic or evil, with origins in Islamic mythology; in Iranian culture, there is great strength attributed to their nefarious ways, and many believe that sorcerers or magicians employ jinns to do everything from torment a meddling mother-in-law to sabotaging a romantic rival.

That such base prejudice and folk anti-Semitism could be peddled on state television is especially painful, given Iran’s long history of religious tolerance among sects – Jewish Iranians have arguably fared better in Iran, and felt themselves more Iranian, than the region’s Arab Jews, who have largely abandoned their home countries and emigrated to Israel or the West. It also remains the enduring obsession of a small clique of religious extremists within the Islamic Repubic’s establishment, who are deepy out of touch with the mores and attitudes of young Iranians, who are sure-footed and largely sophisticated when it comes to dealing with religious difference.

I realized this when I first moved to Tehran as an adult, I lived with my grandfather off of Villa Street, near the Behjat Abbad market, a neighborhood with a bustling Armenian Christian community. Many of the Muslim and Christian Iranians in our area had lived side by side each other for generations, and there was a tolerance for and co-existence with each other’s presence that struck me as incredible, given the chauvinism of the Islamic leadership we were all living under. The neighborhood’s young people would flirt with each other at coffee shops and sandwich joints, often aware of each other’s religious background, but accustomed enough with one another, and enlightened enough, not to care at all.

I’m not saying they would all grow up and marry one another across religious lines, but in the course of daily life, in homework circles, friendship groups, office party socialising, there was a relaxed progressiveness around the question of religious difference. This seemed all the more meaningful to me because of the contrast with other cities I had been spending time in; Cairo, where my Christian landlady railed against the “Muslim butchers with their disgusting Eid Al-Adha, dripping blood everywhere,” and Beirut, where people so often asked your last name first – to figure out your religious background – before negotiating with you socially.

Tehran, and the young people in the neighborhood, seemed worlds away from such religious tensions. That they manage to retain, on the whole, this enlightened spirit, is testament to their own sophisticated and independence of thought, given the sort of prejudiced drivel that a determined circle within the political seems determined to promote. For this narrow band of orthodox Muslims, Jewish Iranians, Christian Iranians, are as foreign as martians, to be avoided and viewed with fear and mistrust, for who knows what polluted and nefarious things they get up to, despite belonging to an Abrahamic faith.

That notion that all Jews are sorcerers, or that most sorcerers are Jews, remains the fringe view of extremist clerics like Naghipourfar. Such paranoia and fear of the other, of course, is typical among the ultra-orthodox of any religion, but in Iran, such people operate in the highest echelons of the state and can peddle their prejudice on state television. That they have failed in turning Iranian young people against one another on the basis of their religious background is something that matters deeply, a sign of the ever-widening gulf between the modern young people who tune out such hateful messages and the clerical establishment who chases after them, more ignored with each passing day. That Naghipourfar is a professor at Tehran University makes one wonder, will he offer a course in ‘Jinns and the Art of Intelligence Gathering?’ Will University of Tehran politics students be obliged to game out how to strategize against a jinn? Maybe the cleric can rub his own magic lamp, and ask it to explain the concept known as brain drain.

Regional Implications of a Nuclear Deal with Iran