Iranians Who Fight Hatred Around the World: Sharon Nazarian

Saleem Vaillancourt
9 min read
Sharon Nazarian and her family left Iran after the 1979 Islamic Revolution, fearing persecution as members of the Jewish community
In 2017 she took up the post of Senior Vice President of International Affairs at the Anti-Defamation League, just as the stirrings of neo-Nazi rhetoric boiled over in Charlottesvile, USA
"Iranians are coming together across religious faith lines as a response, a rejection, an opposition to this authoritarian regime. This is something we have to continue to watch"
Nazarian has worked to reduce hate crimes against Mexican nationals in the US and confronted the Hungarian Foreign Minister about xenophobic language
"We've seen in other authoritarian societies, repression leads to the flowering of the artistic community, or a growing level of networking within communities"

Iran is not just a place. Iran exists wherever Iranians talk and care about Iran. Naturally the Iranian diaspora around the world is an energetic amalgam of cultures, religions and political dispositions. But they are all Iranian, definitely and eternally, however many years they have been away from their homeland.

Three Iranian human rights figures, the lawyer Payam Akhavan, a Baha'i who lives in Montreal and London; Siavosh Derakhti, a Muslim social activist who lives in Malmö, Sweden; and Sharon Nazarian, the Anti-Defamation League’s Vice President of International Affairs, who is Jewish and lives in Los Angeles, embody this spirit. Akhavan's and Nazarian's parents left Iran in the 1970s – Akhavan's to Canada, and Nazarian's to the US – to escape the persecution foreshadowed by the Islamic Revolution. Derakhti's family left Iran after it was exhausted by war with Iraq. And yet each of them is distinctly Iranian in their concern and love for Iran.

Each of these activists has also come to broaden what it means to be Iranian. Akhavan, Derakhti and Nazarian found their way onto paths that led them to Bosnia and Rwanda, to Auschwitz, to Rohingya refugee camps and to the offices of the far-right Hungarian government. These journeys gave the activists, who are among the foremost in their respective fields, a glimpse of what Iran itself needs in order to find a future beyond repression and human rights abuses.

Sharon Nazarian is the Senior Vice President of International Affairs at the Anti-Defamation League, where she leads the organization’s global fight against antisemitism and racial hatred. She also chairs the Y&S Nazarian Family Foundation and founded the Y&S Nazarian Center for Israel Studies at the University of California Los Angeles, where she taught as an adjunct professor in political science.

Nazarian was born in Iran into what she says was "very much an international home, where we had visitors from Europe and from Israel and from the United States." Her father had spent his formative years in Israel before returning to Iran and establishing a successful business there during the 1970s oil boom. But her childhood was soon disrupted by an event that forced Iranians to leave their homeland in droves: the 1979 Islamic Revolution. 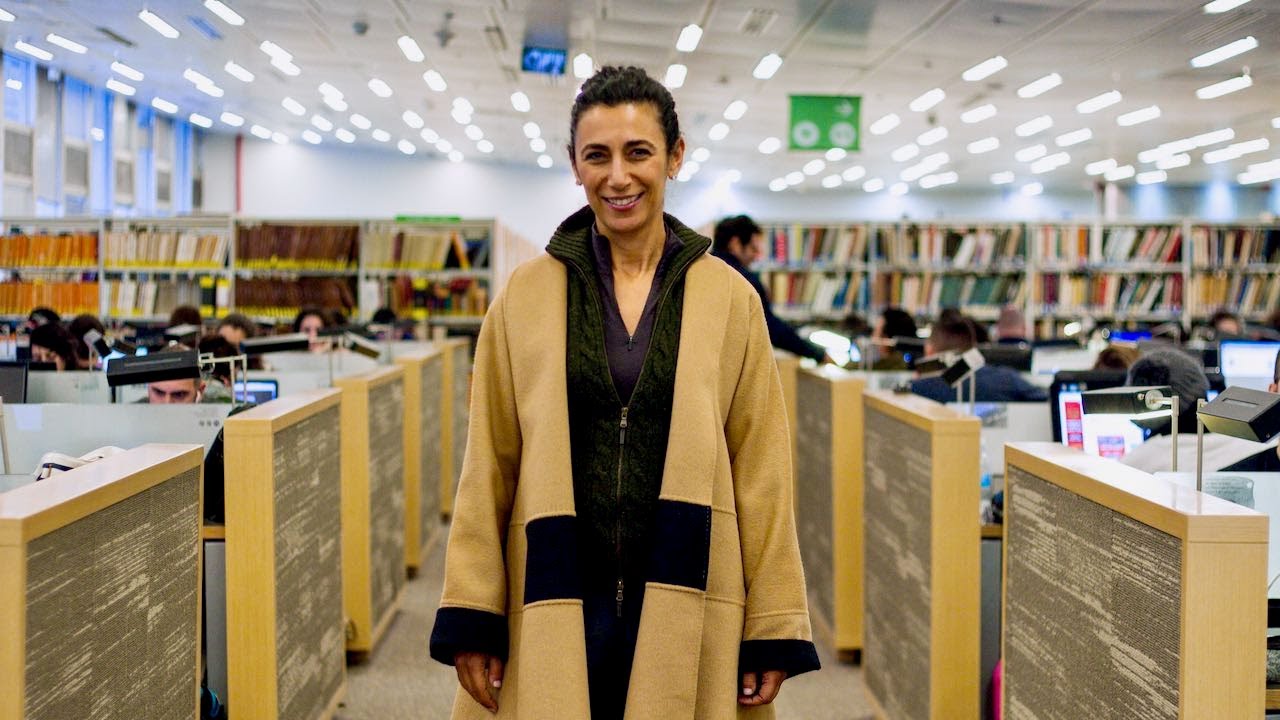 "By the time I was 10 and the revolution took place," Nazarian says, "as part of the Jewish community, my father had decided that, for our safety, we needed to leave Iran. The community felt very unsafe as the revolution was unfolding. We moved to Israel, where my grandmother lived, and where thankfully we had a home and refuge." Nazarian’s father soon saw that the revolution was "not going to be undone" and decided to resettle the family in the United States.

The family arrived in Los Angeles, California as part of a growing diaspora, where her father rebuilt his business and established the Younes & Soraya Family Foundation for educational projects. Nazarian trained in political science, earning her PhD at the University of Southern California, and until recently was focused on teaching and running the family foundation.

Serving as the Anti-Defamation League's (ADL) Senior Vice President of International Affairs, a post she took up in 2017, was, Nazarian says, "not in my career plan whatsoever." But she was asked to consider the post just as the stirrings of neo-Nazi and white supremacist rhetoric across America boiled over in Charlottesville, Virginia.

"The day we were all watching alt-right demonstrators in Charlottesville chant 'Jews will not replace us', and all the horrible rhetoric they had, was a wake-up call for our country," Nazarian says. “And as I was watching TV, and those men, with those torches in their hands, using that horrible language, it reminded me of my childhood in Iran.”

Three months after the victory of the Islamic Revolution in May 1979, when Nazarian was just 10 years old, the new regime had executed a leader of Iran’s Jewish community. Habib Elghanian, an industrialist, was accused of "economic imperialism" and of supporting the "Zionist entity": the term used by Iran’s new Islamic government to refer to Israel. Elghanian’s execution had shocked the Jewish community and pushed thousands of Iranian Jews to leave their homeland.

Jewish businesses and places of worship in Iran had not been targeted by the vigilantes unleashed by the Revolution. But before and after Elghanian’s execution hundreds of Iranians, mostly Muslim officials of the previous regime, were charged with Zionism or spying for Israel. The size of the Jewish community in Iran shrank from between 80,000 and 100,000 to around 30,000.

Forty years later, as Nazarian watched far-right protestors in Charlottesville denouncing Jewish people, her memories of Iran collided with the knowledge that her family had left Iran to find freedom and safety in the United States. Now, she says, "these men in Charlottesville were threatening that very notion of my parents’ decision to bring us [here], to displace us, to come to a new place where we would forever feel safe. That safety was definitely shaken."

The past once again becoming the present showed Nazarian the timeliness of joining the Anti-Defamation League. "I can't imagine more important work that I could be doing than fighting back against the toxic and damaging ideas that were on full display in Charlottesville that day," she says.

The ADL's 107 years of confronting hate speech and extremism have taught the organization, Nazarian says, that "it might start with antisemitism; it never ends with antisemitism." Tackling a triple-barreled contemporary threat – the "heightened feelings of xenophobia" agitated by the mass movement of peoples in recent years, the "rise in  hyper-nationalist political movements" that have always existed but are now finding a way into mainstream life, and the "availability and access of extremist ideas online" – has spurred both the ADL and Nazarian to meet these new challenges at each turn.

The ADL historically infiltrated Ku Klux Klan rallies, which were organized to spread hate speech and incite attacks on African-Americans and other minorities, in order to gather information on the white supremacist group before working to expose them. Now it conducts similar work online. "Extremists meet online, mimic and inspire each other online," Nazarian says. "So that's where we have to show up as well."

This approach means that the ADL can monitor when, for instance, a US-based white supremacist group intends to send an emissary to Europe and can inform European governments and civil society groups that they need to take appropriate action. The ADL's online work also involves engaging with social media companies to encourage – or to shame – them into limiting the spread of hate speech on their networks without infringing on First Amendment rights that protect freedom of belief, expression and peaceful assembly.

A notable success of the ADL's education and training work has been a recent collaboration with the Mexican Foreign Ministry and its approximately fifty US-based Mexican consulates. "In recent years,” Nazarian says, "there has been a huge increase in the number of hate crimes against Mexican nationals in the US." Nazarian adds that Mexican nationals were afraid of reporting such crimes to the local police and had instead turned to Mexican consulates for support. The ADL signed a memorandum of understanding with the Mexican Foreign Ministry to deliver training to consular officials across the US about extremist ideologies, anti-refugee ideologies, anti-bias training and hate crime training. Nazarian calls the project a "unique opportunity" which is now expanding to a public information campaign for Spanish speakers in America.

One of Nazarian’s most forceful interventions on behalf of the ADL took aim at the rise of hyper-nationalist rhetoric in an increasingly troubled political setting: Hungary. Migrants from Muslim backgrounds taking refuge from the Syrian civil war or instability in Iraq, Afghanistan and elsewhere have been driven across Europe to resettle, with many of them fetching up in Hungary. The appearance of these migrants has sparked anti-Muslim rhetoric and attacks – prompting the ADL’s intervention.

Speaking with Hungary's Foreign Minister Péter Szijjártó at a 2018 bilateral meeting in Budapest, Nazarian was alarmed to find that Szijjártó was invoking a far-right trope when speaking about Muslim migration into the country.

"The language he used to describe it," she says, "was that Muslims were coming into Hungary to ‘dilute’ the Judeo-Christian identity of Hungary." Szijjártó went on to say that the country was "under invasion" from these “others,” who were Muslims, and that it was the responsibility of Hungary’s government to protect the "character" of the country.

Hungary’s government has also sought to minimize its role in collaborating with the Nazis in the mass murder of Jewish people, and has been accused of stoking antisemitic sentiment, most visibly through its attacks on the philanthropist and investor George Soros. Born in Hungary to a Jewish family, Soros survived the Nazi occupation of Hungary during World War II and in 1947 emigrated to the United Kingdom. His philanthropy and political activism have been smeared in recent years by Hungary’s government as part of its populist campaign.

"When you see political leaders use language which has historically been used by very extreme fringe groups in white supremacist organizations... it is definitely a step in the wrong direction," Nazarian says. The encounter left her "quite disappointed and maybe depressed. I see leaders with the responsibilities that they should have, really taking the worst instincts of our world today and abusing their position in order to push an agenda which is just so damaging."

Nazarian said as much to the Foreign Minister, explaining that he had to "understand what your language is doing to your own citizens. It's bringing xenophobia and hatred of others and immersing it into Hungarian society. This will be part of your internal culture, of how your citizens deal with one another.”

“That was the only answer I could give him," she adds, "but that conversation left me saddened for a long time."

The silver lining for Nazarian is that, even as hate speech distorts and impoverishes society, some groups’ experience of repression over the decades leads to "unexpected outcomes" as people try to support one another in the face of an authoritarian government. "We've seen in other authoritarian societies," Nazarian says, "repression leads to the flowering of the artistic community, or a growing level of networking within communities." And in Iran, she says, "Iranians are coming together across religious faith lines, and in other ways, as a response, a rejection, an opposition to this authoritarian regime. This is something we have to continue to watch."

This article was produced by IranWire as part of The Sardari Project: Iran and the Holocaust, a project of Off-Centre Productions and the United States Holocaust Memorial Museum.

Read other articles in this series:

Holocaust Education on an Iranian News Website: Why Not?

Derviš Korkut: A Muslim Scholar Who Risked All to Save Jews and Their Heritage

The Real Cost of Censoring Female Athletes in Iran